All Xiaomis with 11 in their names share a common design language, making them easily recognizable. There are variations in color, finish and camera count, but the oversized camera rings are always there. 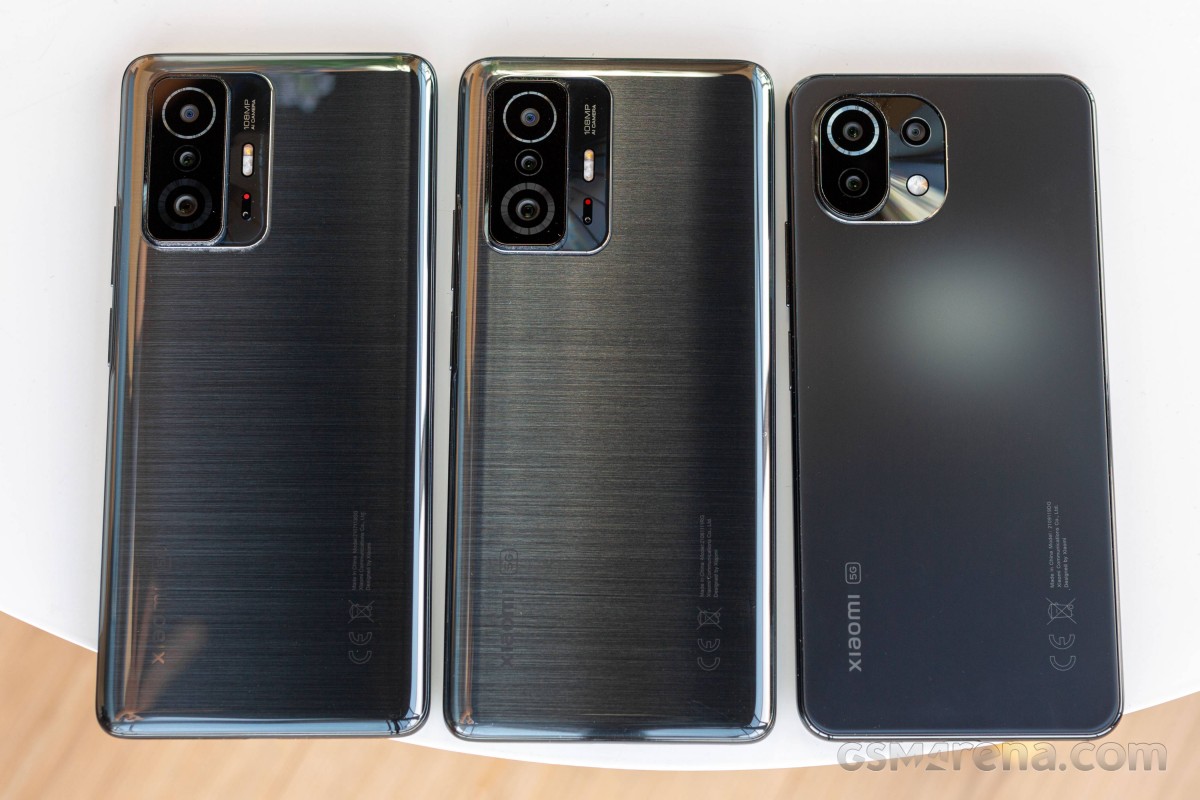 The curved glass back panel sets the 11T and 11T Pro apart from the fully flat Lites. The curvature accommodates the extra battery and allows the phone to feel thinner than its 8.8mm might suggest.

We have the Meteorite Gray option here, and its paint underneath the glass is made to resemble brushed aluminum. The color itself can be described as dark gray, and it has no gradients, just texture below the surface. You can also spot the new Xiaomi logo on the back - there is no longer a Mi insignia. 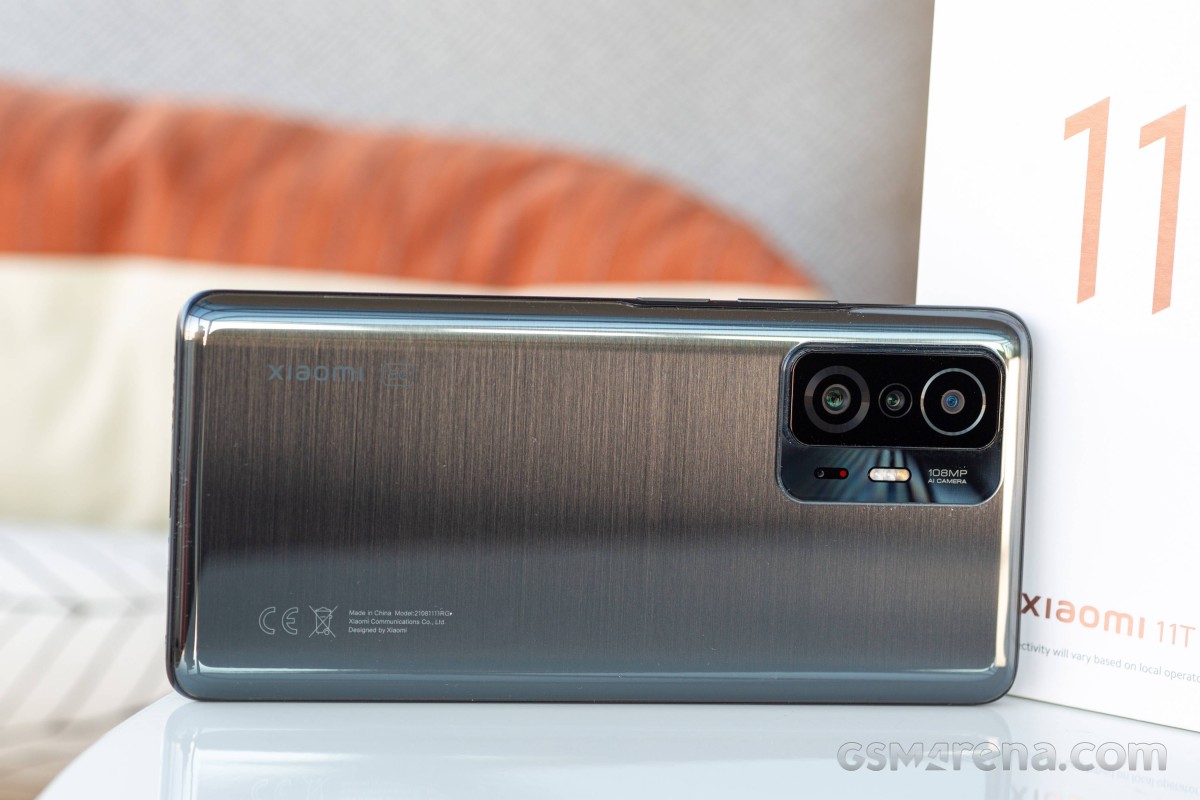 The cameras are grouped in a large black island in the top left corner. It sticks out enough to make the phone wobble on a table - one potential issue easily solvable by using a case. 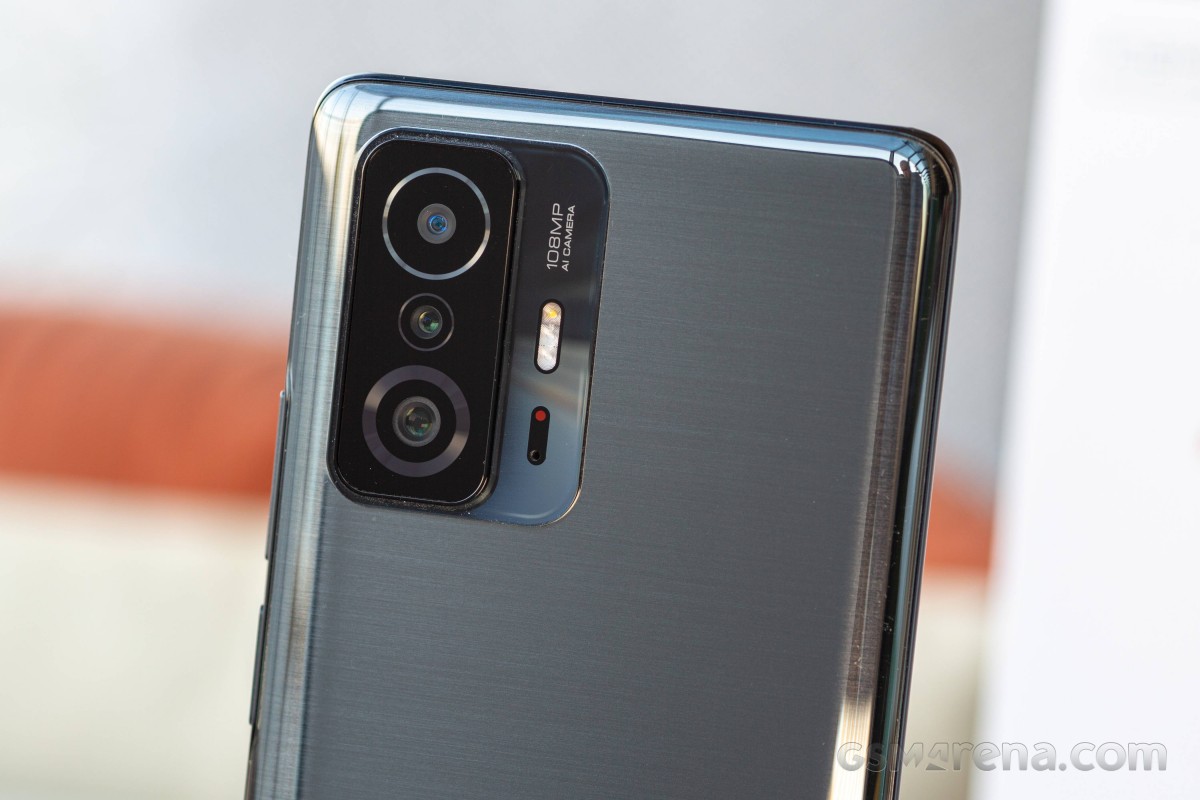 As expected, the glossy rear panel with its dark paint scheme picks up fingerprints like there's no tomorrow. It's about as easy to clean too, but that's a short-term solution. A better idea would be to get either the Celestial Blue or Moonlight White colorways or use the included case (though that's hardly a looker, and it'll obviously make the phone thicker). 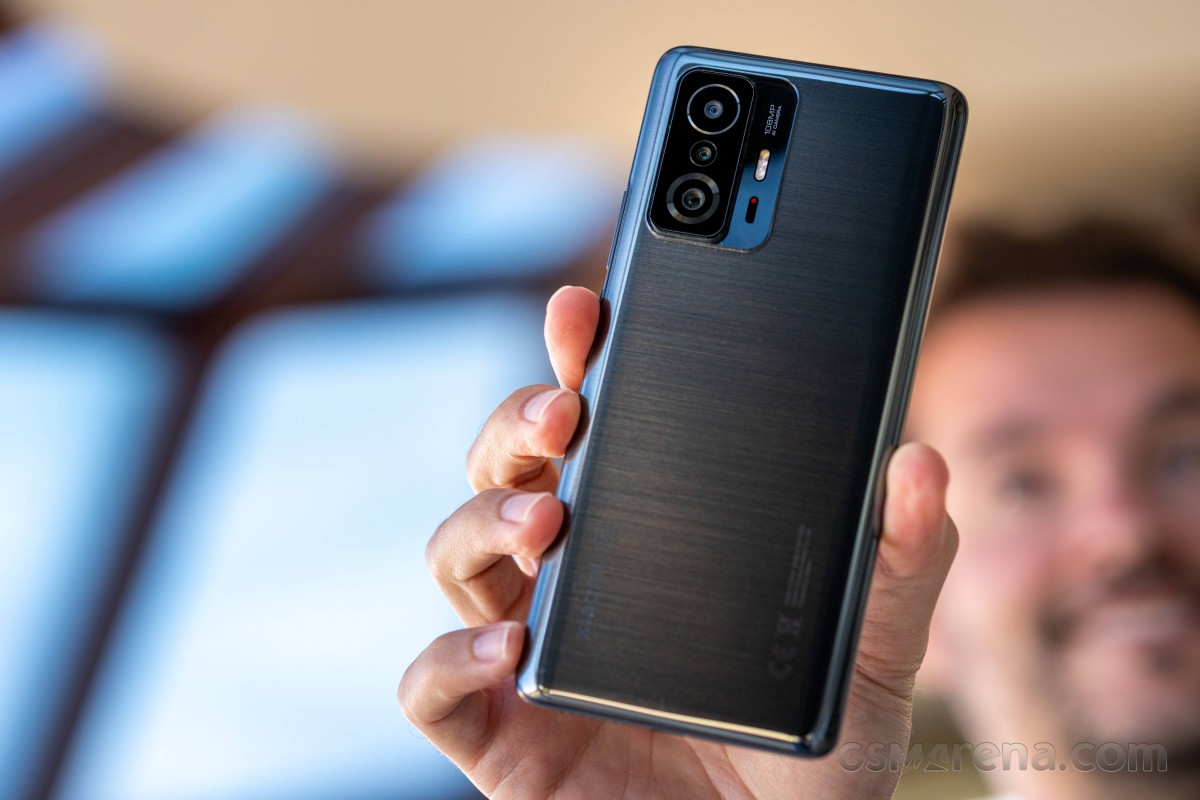 The frame is also slightly curved. Even though it's aluminum, it's not feeling overly premium due to the thick coat of paint on top. On a positive note, that means better grip and no visible antenna lines - if you care about that.

Again, just like the Pro, the 11T carries an IP53 rating. It's not good for dunking it in the pool, but it should survive just fine in light rain. 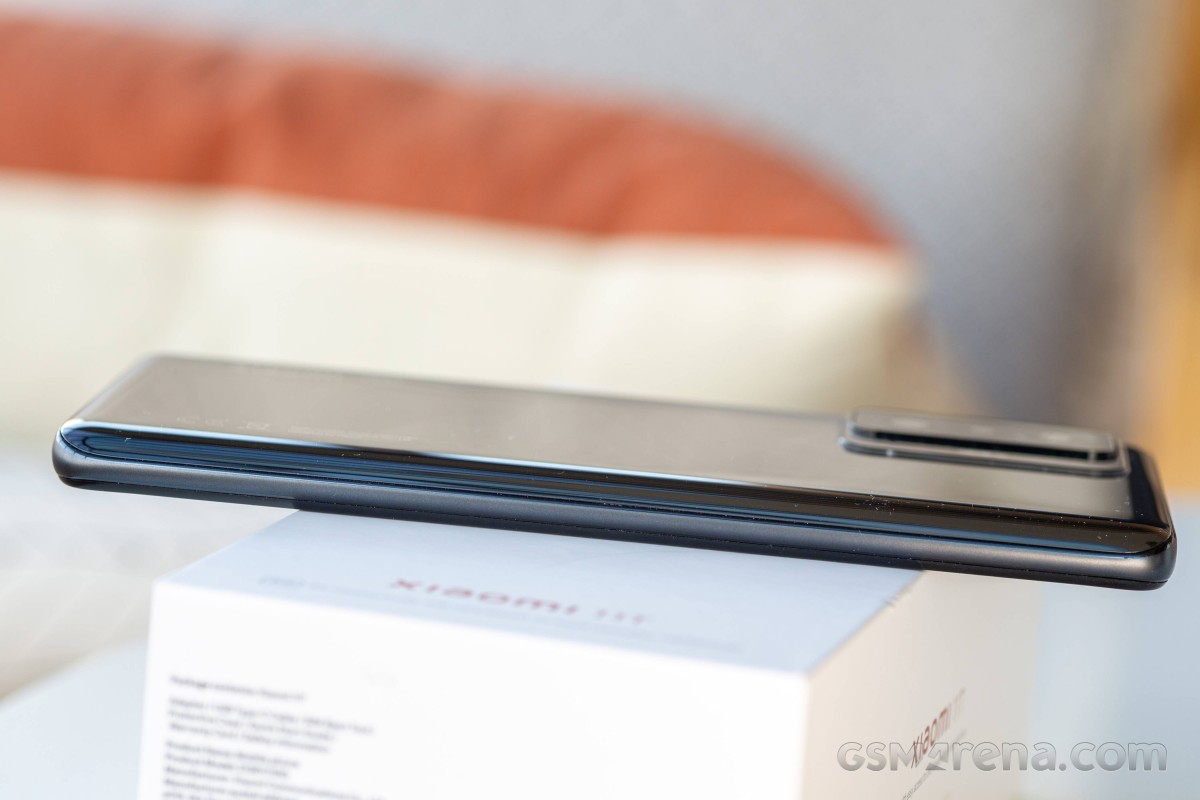 Non-Pro as it may be, the vanilla 11T still gets Gorilla Glass Victus protection for its display - that's a level of parity we enjoy. It has a flat panel with rounded corners and a small punch-hole centered at the top to make way for the 16MP selfie camera. The bezels are reasonably thin and balanced. 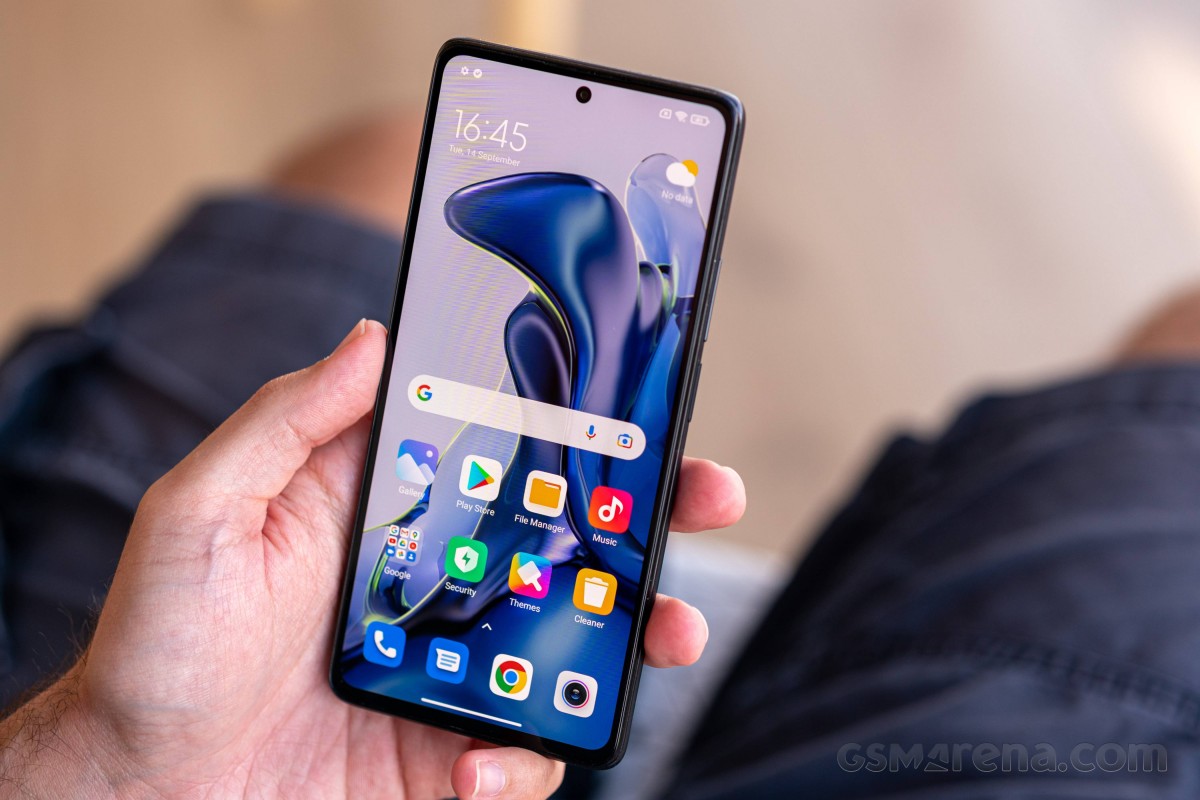 There is one super-thin grille above the screen for a small earpiece. As is usually the case these days, there is no LED notification light, but the Always-on display and breathing light features can serve that purpose just fine. 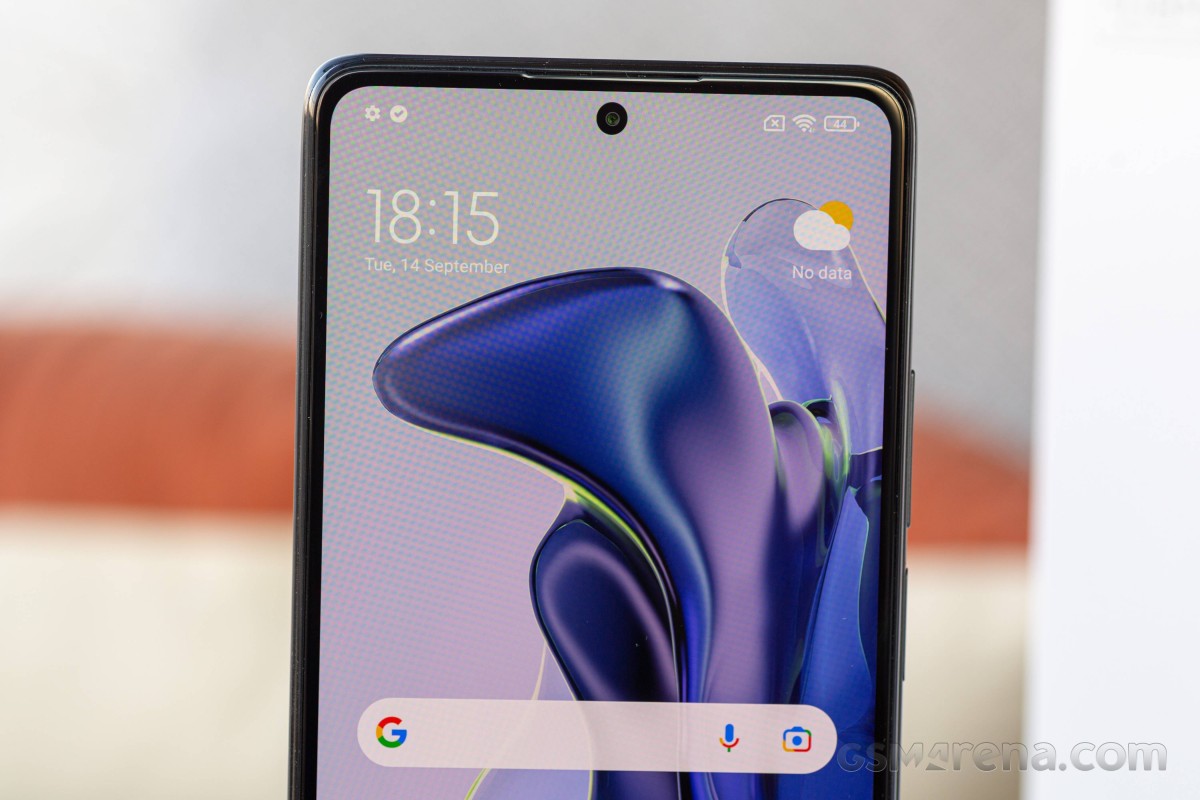 The left is completely bare, while the volume and power keys are on the right. The surface of the lock/power key doubles as an always-on fingerprint scanner. It has superb speed and accuracy, but if you touch it way too often while handling the phone (resulting in misreads), just change its recognition trigger from Touch to Press, and that should help. 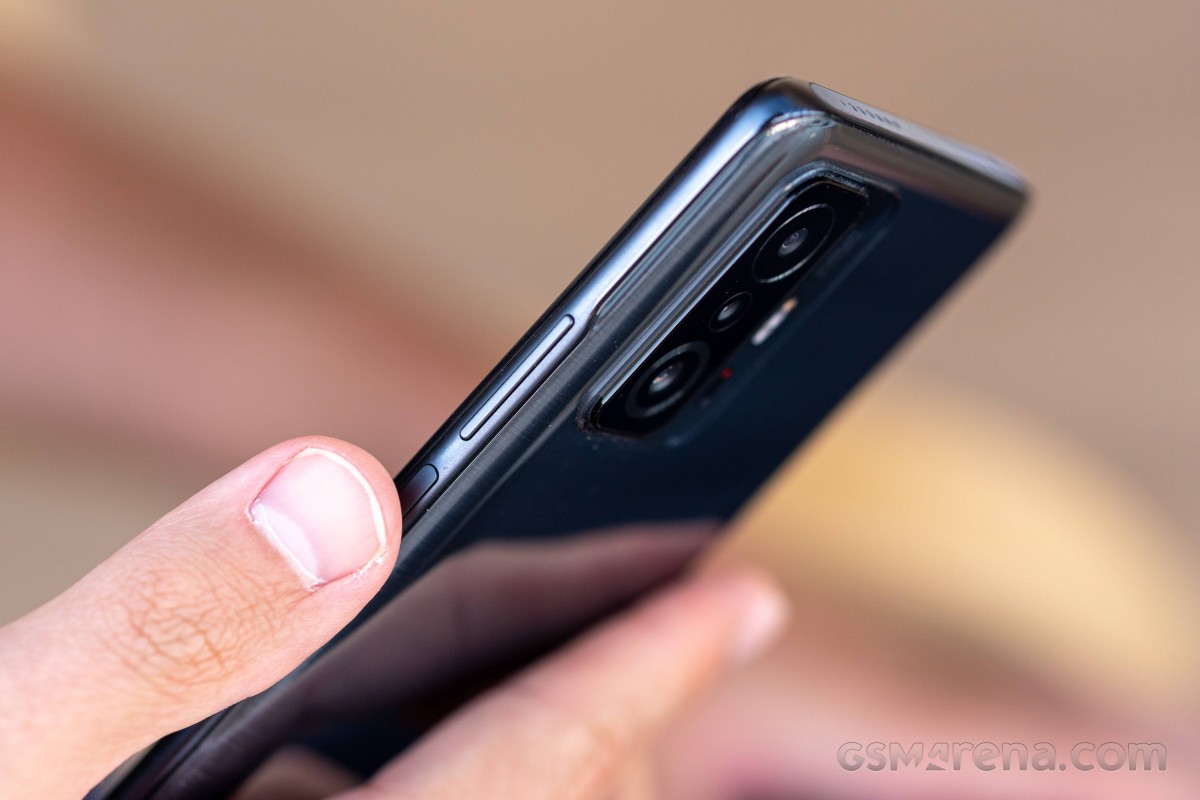 The top of the 11T Pro accommodates another microphone, and there's also a grille for the second speaker, which also supplies the earpiece with sound.

The other speaker is at the bottom, lovely symmetrical to the top one. The USB-C port is also here, as well as the primary mic and the dual-SIM tray, which doesn't take microSDs.

The Xiaomi 11T measures 164.1x76.9x8.8mm - that's 1mm thicker and 8 grams heavier than the Mi 11i. Maybe the new battery design is responsible for the extra thickness and weight. Still, the phone is in line with other 6.67-inchers.

The Xiaomi 11T feels great in hand - it's a phone with a solid build and of balanced weight, and we like that it is splash-proof. The phone has slippery glass panels, but the matte frame is grippy and offers enough support for a rather good case-free experience. 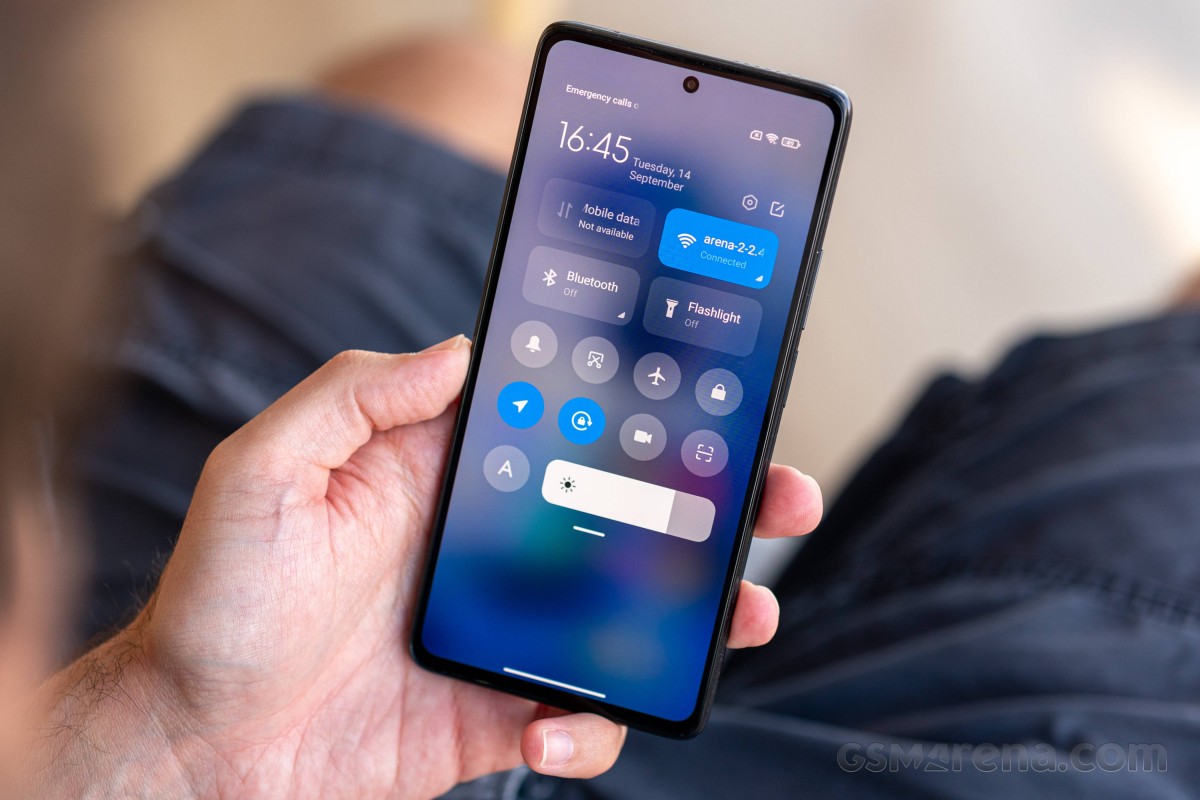