ZTE teases a January 5 event, Nubia Z11 might get unveiled 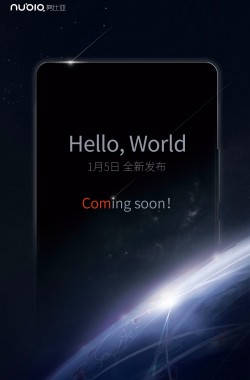 Today on its official Weibo account ZTE's Nubia sub-brand is teasing something that will happen on January 5. It's probably going to be big, hence the need for the teaser, but it's unclear exactly what we are to expect.

This may be when the Nubia Z11 becomes official as the company's next flagship smartphone. The Z11 has so far been rumored to sport a bezelless curved screen 5.2 inches in size and with QHD resolution, a 20.7 MP rear camera with dual-tone LED flash, a 13 MP selfie snapper, 4GB of RAM, 128GB of built-in storage, and Qualcomm's Snapdragon 820 chipset at the helm. It's also reportedly going to have a fingerprint scanner on the back, as well as a metal construction.

On the other hand, ZTE could only be launching an international website (and, presumably, online store) for its Nubia brand on January 5. That's because the company has recently purchased the nubia.com domain name for a whopping $2 million, so it stands to reason that it would want to put that to good use as soon as possible.

Anyway, we expect some more teasers in the next few days, which will hopefully reveal more about the upcoming January 5 event.

Specs are on point including the screen size and resolution, hopefully it'll cost similarly to the Mi 5.

Dude they're just increasing the number by two lol it'll probably be the 13 and 15.