Early last year Xiaomi detailed a 100W Super Charge Turbo charger and talked more about it this February. Now the company seems to be preparing an even faster charger that can be briefly seen in this video:

The charger, MDY-12-ED, has a maximum output of 120W, achieved at 20V (the maximum defined by USB Power Delivery). The difference with the previous charger is that now the current goes up to 6A (the official spec tops out at 5A).

Other charging speeds are supported as well, starting from a modest 15W and going up to 120W. Here’s a still photo so you can have a better look at the supported modes: 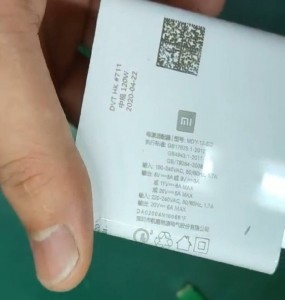 Label with details of the 120 W charger

Back when Xiaomi was teasing the 100W charger (which was never released to consumers), it claimed that it can fully charge a 4,000 mAh battery in just 17 minutes. This one will likely be faster (vivo says it can do it in 13 minutes).

But this goes beyond phones – 120W should be enough for powerful laptops as well (a new Mi Notebook, perhaps?).

Is that why you can do a thousand different things on MIUI that simply won't be possible on iOS? According to my estimation, IOS will catch up with miui 12 in the year 2035.

Nobody "comprende" as Muiu is nothing else but an ios copy paste on an andeoid Core. Actually, all i can see is how xiaomi would definetly like to be apple, and not the other way arround.