We’re hearing more about the OnePlus 6T as the time for the Chinese phone maker’s flagship refresh is nearing. Today, a supposed invitation for the launch event has leaked on the Chinese social network, Weibo.

The alleged invitation’s tagline is “Unlock The Speed”, which is likely a reference to the devices supposed use of an in-display fingerprint scanner. The invitation says the event would take place on October 17 in one of its biggest markets: India - where it will launch exclusively in the country.

We can’t hold a candle to the authenticity of this invitation. But we’d imagine that OnePlus will be confirming an event date and location in the next week or so considering how far away we are from the supposed launch date. Huawei’s Mate 20 Pro launch is going to happen on October 16 in London, so perhaps actually setting it for October 17 might be strategic. 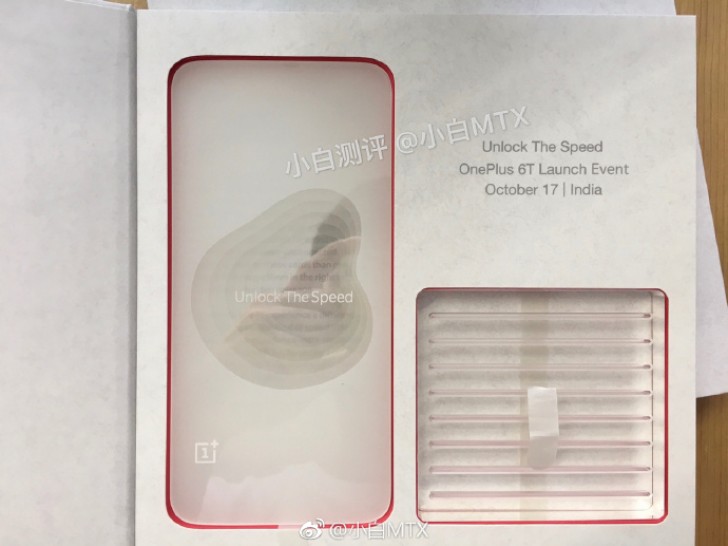 The device’s OPPO counterpart is the OPPO R17 Pro. Because of this, there have been conflicting rumors and reports that the OnePlus 6T would feature a triple camera setup. For the sake of OnePlus’ low-cost, high-value image, we’re expecting dual cameras. For the record, the supposed images of the OnePlus 6T on Weibo alongside the alleged invitation have triple cameras.

The notch is also rumored to take OPPO’s form of a smaller ‘waterdrop’ shaped notch. The display might the same 6.4-inch AMOLED panel with 1080p+ resolution. Otherwise, the OnePlus 6T might possibly be the first officially water-resistant OnePlus device. Of course, if this is the case, we hope you already started saying goodbye to the headphone jack.

Do you think the OnePlus 6T will have three cameras or two? If the phone turns out to have a water-resistance rating, would you care if the headphone jack was removed after all?

Dear, Sorry to say this launching date of Oneplus 6T will be on 30 of October 2018 in India at New Delhi. Reference: https://forums.oneplus.com/threads/oneplus-6t-get-ready-for-launch.922088/

I got pissed off by waiting for one plus two, then I bought samsung s6. This time the same boring waiting... And I am going to buy Pixel 3. Go to hell oneplus :D