Apple beats expectations in Q3, has sold over 1.2 billion iPhones in 10 years

Apple posted iys results for the third quarter of this year, beating Wall Street expectations and sending the stock up 6% in after-hours trading. Revenue for the quarter grew 7%, earnings went up 17%. The Services division hit an all-time high revenue, Tim Cook says that the division alone could be a Fortune 100 company. 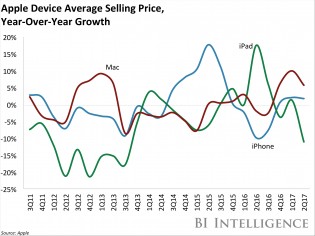 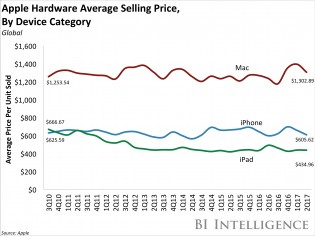 Also, iPads have bounced back – after over 3 years of declining sales, the iOS tablets sold 14% more units. However, in monetary terms sales went up only 2%, suggesting that the cheaper $329 iPad is responsible for a huge chunk of the new sales. A total of 11.42 million iPads we sold. 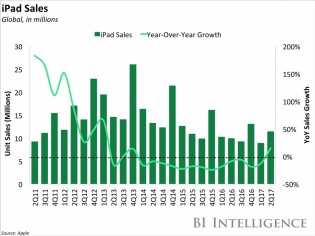 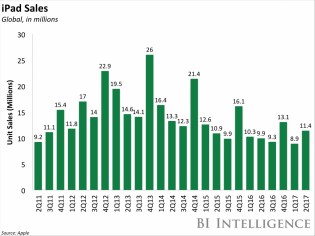 iPad sales: in units • in dollars

The iPhone, Apple’s core product, sold 41 million units – up 1%, but slightly below expectations of 41.1 million. Cook did warn that there will be a pause in iPhone sales as the new models arrive in the fall, including the anniversary iPhone 8.

Apple also used the occasion to announce that it has sold over 1.2 billion (!) iPhones since it launched the original one 10 years ago. 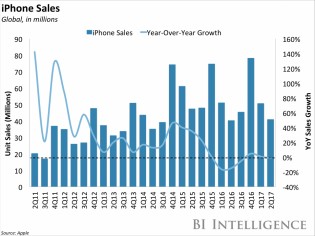 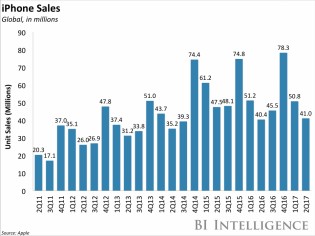 iPhone sales: in units • in dollars

As for the rest, Apple Watch sales went up by a solid 50% in the quarter while Mac sales were flat. 3 in 4 Apple Pay transactions were conducted outside the US, a strong international presence.

Apple has a $1 billion fund invested in Corning, suggesting a return to Gorilla Glass (and a parting of ways with ion-strengthened glass).

Finally, the cash: the Q3 revenue was $45.4 billion vs. expectations of $44.95 billion. The guidance for the next quarter revenue is $49-$52 billion (bullish compared to the analyst consensus of $49.21 billion). iPhone sales in China declined, however.

They forget that last bit, sometimes.

Oh you haven't used an apple pencil before. For a bluetooth enabled, pressure sensitive, angle sensing stylus the apple pencil is fairly priced. Have a look on amazon (eg. pencil 53 or adonit pixel) You are in a lecture where you don't have printed...

With so much cash in hands, why not to build iPhone killer, and destroy competition? :)