The iPhone XR was the first commercial success that came on the second attempt for making a more affordable iPhone. The iPhone 5c failed to impress in 2013, and we thought we'd never see the maker give this idea another try. Well, last year the iPhone XR was more than well received being the best selling iPhone of the trio, so this year we welcome its sequel - the iPhone 11.

The iPhone XR was indeed a cheaper, toned-down version of the XS generation, with an LCD screen, one camera short, and promised some excellent battery endurance. Well, when we say cheaper, we are not saying cheap, as those words mean something different in Apple's universe.

But truth be told, this year the iPhone 11 is even cheaper than the XR on launch - now priced at $700 instead of $750. The good news is that nothing has been left out and there are a few welcome additions to the low-tier iPhone.

So, the iPhone 11 keeps absolutely the same form factor and screen as the XR's. It employs the same 6.1" IPS LCD screen with 326ppi and a notch on top that contains the Face ID tech. The screen specs are unchanged - same contrast, brightness, Haptic Touch, and whatnot.

The iPhone 11 boasts the new Apple A13 Bionic chip - the same SoC that powers the flagship iPhone 11 Pro duo. It also gets a second camera, and it's the new 12MP ultra wide-angle snapper, also brought from the Pro models. Features like Crop Out of Frame are available as well, and also shooting 4K videos with all cameras at once. 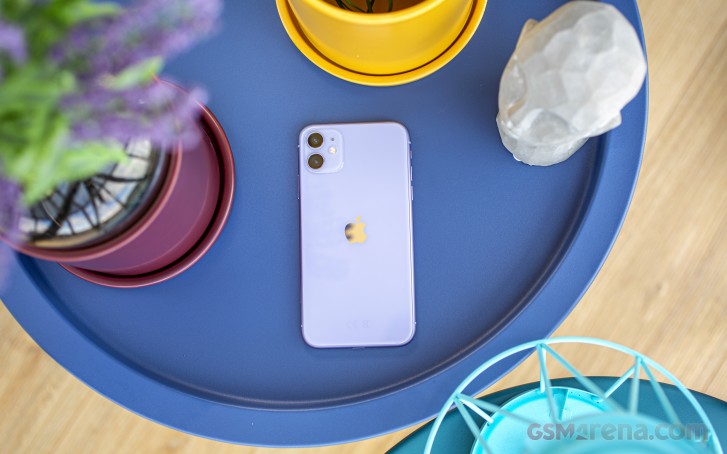 The new 12MP selfie camera has made it to the iPhone 11, too. It's another 12MP shooter with 23mm wide lens, and it can do regular 4K clips at 60fps, or 4K at 30fps videos with expanded dynamic range. Cinematic stabilization is available on the front cam on all modes.

Apple managed to squeeze a larger battery in the same body as last year - now the iPhone 11 gets a 3,110mAh battery compared to 2,942mAh unit within the XR.

The iPhone 11 supports 18W charging, but it is not bundled with a fast charger in the box as the Pro models.

So, a new camera and new chip, among some new cool software tricks, are what's new in the iPhone 11 over the XR. Oh, and Apple is offering the 11 in some new colors like Green and Purple (the latter we have here for review).

The iPhone 11 also brings better water protection and may or may not have tougher glass on its back and front. We guess only time and drop accidents will confirm the latter.

Anyway, we are ready to unbox this iPhone 11, so let's get this review started, shall we?

The iPhone 11 box is white and just a little bit larger than the phone itself. Inside, you will find the iPhone 11 bundled with a regular Lightning cable, a pair of EarPods ending on a Lightning plug, and the ancient 5W charger.

Apple is no longer shipping the iPhones with a 3.5mm adapter. 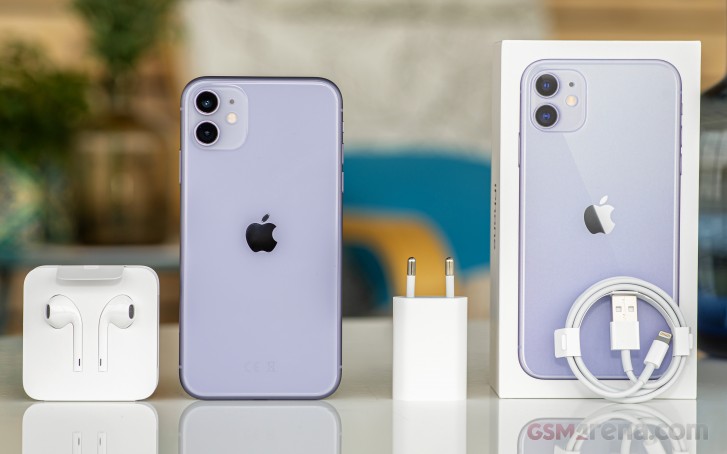 While the iPhone 11 supports 18W fast charging through USB Power Delivery, it is not bundled with the new 18W Apple charger that comes with the Pro models. Then again, the iPhone 11 is $50 cheaper than the XR, and we guess with those savings you can buy the said 18W charger ($29), the required USB-C-to Lightning 1m cable ($19) and the 3.5mm adapter ($9).

Well if you're interested for buying an iPhone I recommend to buy a iphone 11 used because with that you will get an iPhone in less amount.