The annual iOS update was announced back in June and made available this September. It's not a major or redefining upgrade. Instead, it focuses on refining the design, adding new usability features, and introducing advanced machine learning.

As part of the new iOS, version, Apple redesigned the Control and Notification centers, the App Store, added a screenshot editor, implemented new effects for Live Photos, and made Siri smarter, among many other novelties. 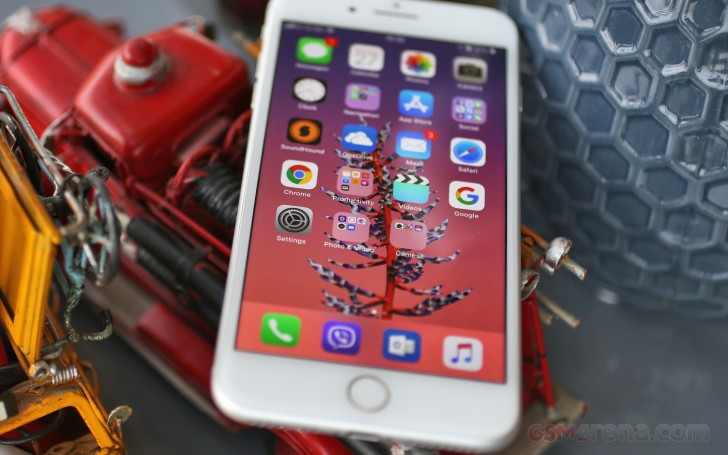 Since the beginning the iOS user experience has successfully revolved around a few basic premises anyone can pick up quickly.

First - the homescreen. All apps go there, and you can group those in folders. There are no widgets on the homescreen; there is no separate app drawer either. There is a leftmost Today page, which supports various widgets and includes a system-wide Spotlight search. All available widgets reside on the Today page.

The homescreen • A folder • The Today pane • Spotlight search

Second - the Notification Center. It's gone in iOS 11 (sort of), and it's unified with the Lockscreen. A swipe down brings out the lockscreen with the most important notifications. Swipe up for more or swipe left for Today (the widget page).

Everything is fine unless you use different wallpapers for the home and lock screens. Then it looks a bit weird. We can see why Apple ditched the notification center for the lockscreen as the functionality of these two has been overlapping for a while. We just think it needs some further refinement, that's all.

Third - Control Center. You slide out this pane from the bottom and it packs quick toggles and quick shortcuts. In iOS 11 it fits all controls on a single page (finally!) and you can manually pick the ones you need (2x finally!). You can use 3D touch to access additional controls.

Oddly, a tap on Wi-Fi or Bluetooth severs all connections, but it doesn't turn off these features. According to Apple this way you will keep AirDrop active and yet won't be connected to anything until the next morning (or until you manually initiate connection). That's fine, but now we have to dig in settings to actually turn those off, which is a step backwards. If only Apple had some additional layer of interaction to make those toggles two-step triggers. Like a longer press or 3D Touch. Oh, wait...

Fourth - the Settings menu. Every imaginable setting is packed in there, just like with any other mobile OS. It isn't the best organized settings menu, but it keeps getting better with each iOS revision.

In the absence of any form of multi-window multitasking (or, well, any multitasking), the iPhone 8 Plus does at least have the exclusive landscape mode for the homescreen and a dual-pane layout for some of the native apps. Safari goes beyond that and becomes looking more like its desktop counterpart.

Now that's out of the way, join us as we explore some of iOS 11 features in more detail trying to see what's new and what's gone for good.

Let's talk about the Today page we've mentioned earlier. It's like a homescreen with a list of widgets and you choose which ones should be present. The top is always the Spotlight search field, and then you can put weather, calendar, Siri app suggestions, and whatever widgets your apps are offering.

If you don't like the Today page you can disable it on the lock, home, or both screens.

The 3D Touch functionality may have started as a gimmick, but its usefulness is growing with each update. In this iteration of iOS, you can use the 3D Touch on various app icons to reveal quick actions and favorite rows, if available. You can also use it on notifications, toggles, and in-app content pop-up or expansion (pictures, links, file descriptions, etc.). You can also use 3D Touch on folders to rename them or see the apps inside that have pending notifications.

Using 3D Touch across the interface

Siri - Apple's digital assistant - is used by 375 million people monthly. But that was old Siri, the new one is much, much smarter. And it sounds smarter too, thanks to deep learning, Apple has created a more humanly sounding female voice and there's a male voice, too. For example, Siri can pronounce the same word differently, matching natural pronunciation of a sentence.

Siri looks different now. The new UI is better at question-and-answer conversations and shows multiple results by default. It understands context so it will suggest creating an appointment based on what web page you just bookmarked in Safari. It will also suggest new topics you may be interested in, based on what you're reading. This learning will be synced across all your devices, so they improve together.

Siri can also do translations for you. You can speak to it in English and it will translate that to Chinese, French, German, Italian or Spanish.

Speaking about buried stuff in Accessibility, here you can also find the diched Auto Brightness toggle. And the new Dark Mode is here, too. It's much more advanced than the Invert Colors option in the previous iOS version and will not invert essential UI elements, pictures, video, among other important visuals.

Now let's take a deep dive into the not-so-obvious features in iOS 11. For starters, the Do Not Disturb Mode has been expanded with DND Drive option, which gets a dedicated toggle in the Control Center.

Screen recording, another new toggle in the Control Center, does exactly what its name suggests.

But the newly implemented screenshot editor is probably the most obvious addition - once you grab a screen snap you can now immediately doodle on it.

The App Store is a cornerstone of the iOS experience. It's turning 9 this year and has served 180 billion downloads over its exciting life. And according to Apple it has paid out $70 billion to app developers (30% of which just in the last year). So it's a huge business.

To better highlight developer creations, the App Store is now split in two - Apps and Games. The Games tab will list in-app purchases below the game (great for consumers, makes pay-to-play games easy to spot). There's also a new Today tab, which highlights Apple's favorite apps and games and their developers.

Another new feature found in iOS 11 is Emergency SOS, which hopefully you will never need. You can either hit the power key five times, or trigger it from a new menu invoked by holding the lock and some of the volume keys. Then your phone will dial your emergency contacts in a pre-defined order.

Finally, the last thing worthy of attention is the one-handed iOS keyboard. Yes, you can now compress the keyboard to the left or right side of the screen. The Plus users will be most appreciative for sure.

The iSO 11 is fast, has some thoughtful additions and has seen some long overdue updates. It's still behind Android in some features, while far ahead in others. While it's not perfect, iOS is going pretty well in the right direction.