The image gallery of the BlackBerry Bold 9700 is almost identical to the one found on its predecessor.

It has standard functionality including thumbnail and list view of the images.

The gallery is hardly grounbreaking stuff

Quite naturally the photos can only be browsed in landscape mode. There is no accelerometer to provide auto screen rotation of any kind.

Luckily, this time you can skip to the next photo without returning to the gallery. It is much more convenient than the outdated solution of the Bold 9000 where you needed to enter the menu for that purpose.

Overall, picture browsing is decently fast. Both zooming is panning is pretty quick and probably equal to what we saw on the Bold 9000. We can easily think of a few handsets that do better

The BlackBerry Bold 9700 is equipped with a 3 megapixel autofocus camera and a LED flash. It's hardly an impressive performer but it seems like the best BlackBerry camera we have ever seen. And considering the original Bold probably had the worst camera ever produced, this is a major step up.

The camera interface is somewhat basic with a limited number of customizable settings. Since the display now has the same aspect ratio as the camera sensor there was no need to waste a part of the viewfinder. The problem is that the indications at the bottom cover a part of the frame and can make proper framing a bit hard.

Another issue is the camera key which is not ideally located considering that you need to do most of your shooting, when holding the phone vertically. Maybe a camera key at the place of the Mute key might have been more comfortable but we are just speculating here.

The BlackBerry Bold camera user interface is quite basic

The camera options however are also pretty uncomfortable to access as there are no shortcuts on the screen meaning that you have to dig in the menu. Not that there are too many settings you can apply, but still.

The "best" part of the camera is undoubtedly the image-geotagging, which allows you to automatically record your location in the images EXIF data.

The few other settings available are: white balance, color effects and digital image stabilization. There is also the obligatory picture size and quality.

The image quality of the BlackBerry Bold 9700 is about average for the 3 megapixel league. We are not enjoying particularly good weather around the office these days so the camera samples might seem worse than usual to you, but actually the amount of resolved detail is pretty decent. The noise levels are also about average for a 3 megapixel shooter in those kinds of conditions.

Contrast is ok, hardly impressive and the colors could have used a tad more saturation but they aren't too bad overall.

Truth be told, the BlackBerry Bold 9700 is hardly a phone you will consider if photography is your thing, but it might just do the trick if you use it to take the occasional contacts photo.

We also snapped our resolution chart with the BlackBerry Bold 9700. As you can see its perfomance is quite far from the 5 megapixel shooter of the Nokia E72. You can check out what that test is all about here. 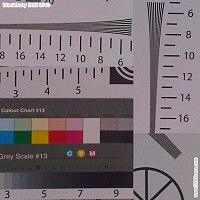 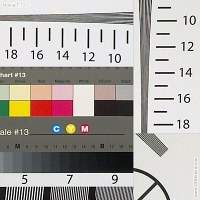 The first Bold was a major disappointment as far as video recording was concerned. It used to produce videos that looked bad on the display itself let alone when watched on a larger screen. The Bold 9700 however brings some improvement in this department.

Camcorder UI is even worse

It ups the maximum resolution to 480 x 360 pixels from 480 x 320 and improves the amount of captured detail dramatically. There is still way too much compression applied and if you compare the Bold 9700 to one of the best examples on the market it would look pretty bad, but in this family even C students are considered over-achievers.

Videos are captured in 3GP format and if you still fancy them, you can apply various color effects on them. The LED flash can also be set to work as a video light. We still doubt anyone will take video recording with the Bold seriously though.