First spotted by Mobielkopen, a new patent has been posted in the US Trademark Patent Office’s website reveals what Motorola’s foldable phone could look like.

The US patent filing is titled as: Electronic device with hinge and corresponding systems and methods and is authored by Motorola Mobility LLC from Chicago, IL. This filing was first submitted to the USTPO on May 31 and was just posted yesterday.

The hardware diagrams very interestingly show how Motorola plans to make the foldable phone work. The front of the unfolded device has very tall foldable touch display with a hinge in the middle. This hinge is exposed so you can some of the engineering that went into the device’s folding action. 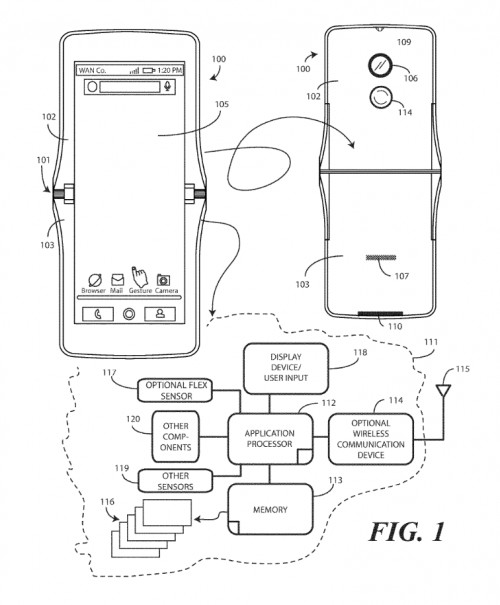 The patent explains how the phone is assembled and how the mechanical hinge works to fold the flexible display closed. The patent itself doesn’t mean that this is the exact hardware that we’ll see very soon from Motorola, but at the very least, it does prove that Motorola has been working toward a practical way to manufacture this foldable smartphone.

This is the same kind of hinge that Motorola has adapted to work on its flexible smartphone.

Earlier this year, Tech Radar reported about a comment that Lenovo CEO made to a group of journalists back during MWC in February. Regarding a question about a possible Motorola RAZR revival: “With the new technology, particularly foldable screens, I think you will see more and more innovation on our smartphone design.” Which indirectly implied that Motorola would employ the use of foldable displays on some future hardware release and perhaps even use the RAZR branding.

Perhaps this device could be the reason that Motorola didn't give much importance to refreshing the Moto Z3. It it focusing its resources and efforts into making a commercially available smartphone with a foldable display.

Thanks for the tip, Michael!

Via (Translated from Dutch)| Source (PDF)

The only folding design I'm interested in opens to make the display wider, not taller. Walking around?: whatever inanely tall & skinny ratio is the latest trend. Waiting for a meeting?: large tablet-sized display for more comfortable reading.

This will be nice if it has a stylus. Be great for taking notes. Flip it open like a police man's notepad, and then flip shut to put back in pocket. Just as long as their is no join when it bends. Let's see if Samsung's Galaxy X does this. Ooh, X = 1...

Didn't you saw the designs based on patents ?