Two years ago today, Samsung announced the Galaxy A-series lineup for 2016, while the 2017 roster waited for its namesake year, before going official on January 2, 2017. The 2018 models apparently won't meet the 2016 schedule and we won't be surprised to see them arrive with the new year. 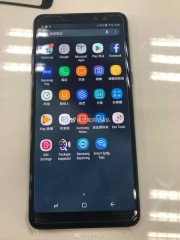 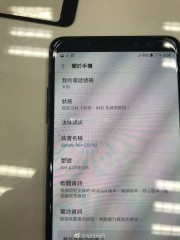 The change seems justified - the new phone has what appears to be a tall display, Infinity display as Samsung likes to call it. The Galaxy S8 pair and the Note8 have an 18.5:9 ratio, but an earlier leak suggested a slightly more conventional 18:9 aspect for the A-series. Obviously, we can't tell the difference from these photos.

It would have been nice to see a photo of the back of the handset - word on the street is that there will be a fingerprint sensor on the back, a centrally placed one for a change.

We'll know it all for certain soon enough, perhaps within a month?

And so is correct mac donald is much better because its a world most known and used restaurant. And so delicious.

Go get yourself off on that chinese phones comment section then. This is like saying McDonalds is bettter than French restaurant because is sells more burgers... It's quality, not quantity...