Realme executives showcased a new smartphone that will be introduced on May 25, and now we know the name - it will be called Realme X50 Pro Player (Edition). It was codenamed Blade Runner and will be a “speed king” with “impressive performance”, according to the Weibo page of the smartphone brand. 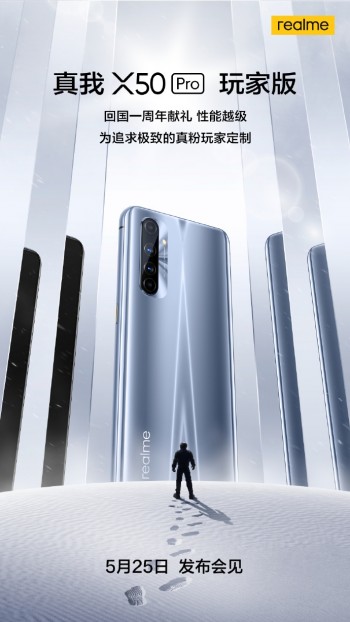 The Realme X50 Pro Player visually resembles the Realme X50 Pro, but comes in a new Gray/Silver paint job. We expect this to be a gaming-oriented phone from the company with new software features to let you dedicate all of the Snapdragon 865's might to gaming and minimize distractions.

The specs aren’t officially confirmed, but we are pretty sure Realme will go that way in order to provide proper flawless gaming experience to its fans.

The unveiling on May 25 will see eight new products get introduced. Alongside the new X50 Pro, we also should see a Realme TV, a Realme Watch that was teased yesterday, TWS earphones, and at least two Realme X3 smartphones.

Well I said that because the shark 2 got a worse chip but still,it will run any game

Nope, not how that works. Don't be so entitled and insist on wanting top-tier specs for free.