The Google Home Mini was leaked a couple of times recently, so you knew it would play a part in Google's presentation today. As it turns out, it was the first new product to be announced.

The Home Mini is, like its name strongly implies, a smaller version of the original Google Home smart speaker that was released last year. The Home Mini is covered in a new fabric-like material that was developed specifically for it. 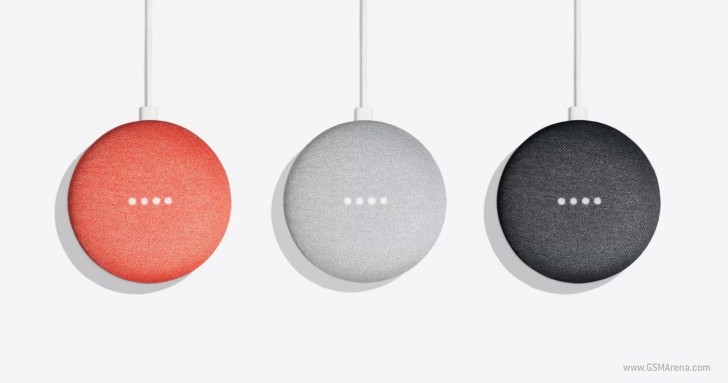 The Google Home Mini will become available on October 19 for $49, in the three colors you see above, from major retailers in the US.

On the other hand, the Home Max is all about music quality, with its two 4.5" woofers with high-excursion, to really boost those low frequencies. Two custom 0.7" tweeters complete the package. It's 20 times louder than the initial Google Home. Max uses Smart Sound, powered by Google's AI. It adapts to you and your surroundings. It will automatically tune the speaker to correct for where it's placed in a room. Since it's all done dynamically, if you move it it will adjust again. It will tune EQ to what you're listening to, and turn volume up when the dishwasher's running, for example. YouTube Music, Spotify, and other top music services are supported. It can be stood up vertically or placed horizontally.

It will be available in the US in December in two shades of grey for $399, and it comes with a free one-year subscription to YouTube Music and YouTube Red, so you can listen to music ad-free.

Both the Google Home Mini and the Google Home Max come with the Google Assistant as you'd expect, and the exact same AI feature set as the original Home. You can talk to it, ask it questions, ask it to play music, cast audio to it, or have it control your Chromecasts and smart home products.

"It will turn volume up when the dishwasher's running"... Creepier than Pennywise, The Dancing Clown... I wonder what other noises it will be picking-up and listening-in too.......