The Honor 9X is a sight for sore eyes as the first thing anyone will be noticing is the absence of a screen notch. The front is all screen, uninterrupted, and that's a rarity among the modern smartphones even within the flagship series. 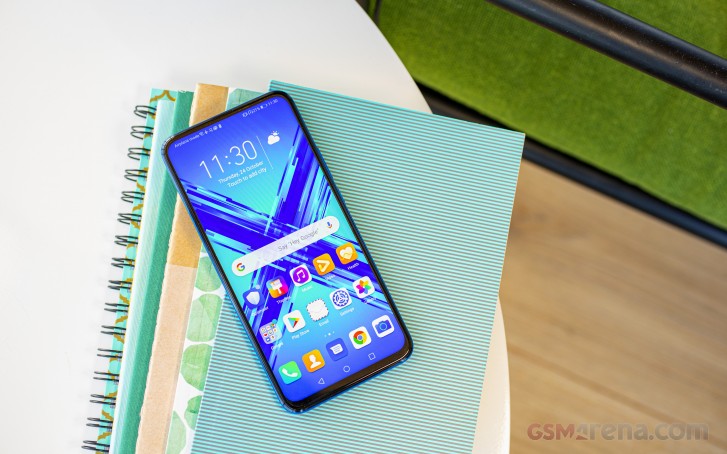 The Honor 9X, just like the 8X and most handsets of today, enjoys glass panels and a metal frame between those. There is no info on the glass maker, but Huawei has been known of using Gorilla Glass and not mentioning it, so we'd throw an educated guess and say those pieces probably came from Corning. 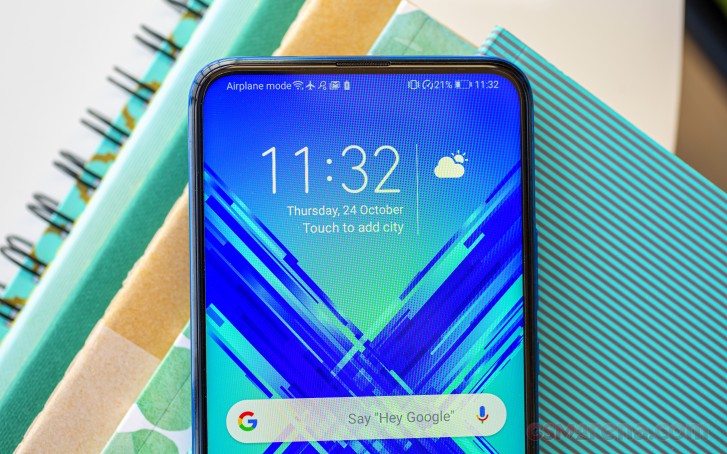 The front is all about the screen, of course. The 6.59" LTPS IPS LCD panel takes almost the whole space, leaving only a small black strip around the bottom. The corners of the display are rounded, there are no cutouts, and in addition to the screen glass - Honor is also offering a factory-applied protector. 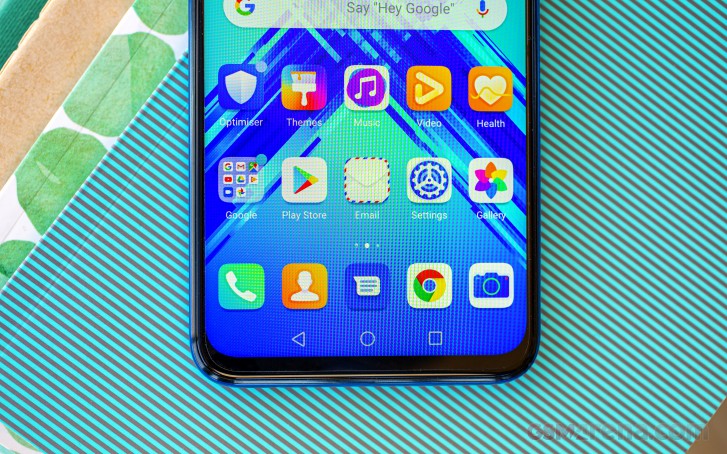 The thin film helps against scratches, but it gets all smudgy in no time and is a nightmare to clean, so we peeled it off in a couple of hours.

The earpiece is at the front, too, etched above the screen on its enclosure. It is just an earpiece - it can't be used as a second speaker, and there is no hidden LED light for notifications underneath its grille. 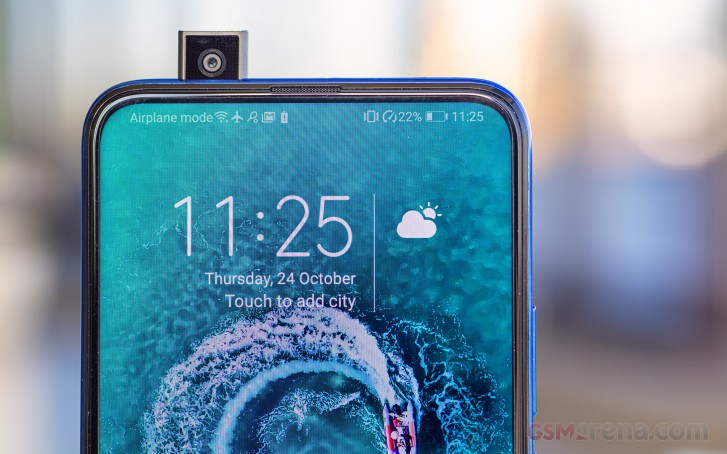 The selfie camera is now on a motorized pop-up module on top of the Honor 9X. It goes up and down a bit slowly for our taste but it is what it is. If the phone detects a free fall, it retracts the camera on its own.

Mesmerizing rear panels have been a specialty of Huawei and Honor for a few years already. And the Honor 9X keeps the tradition going as well. Our Sapphire Blue color is indeed stunning, and probably the first we see with multiple X patterns spreading from the center. Each X reflects light differently but subtly, and the effect is quite unique and beautiful without being over the top. 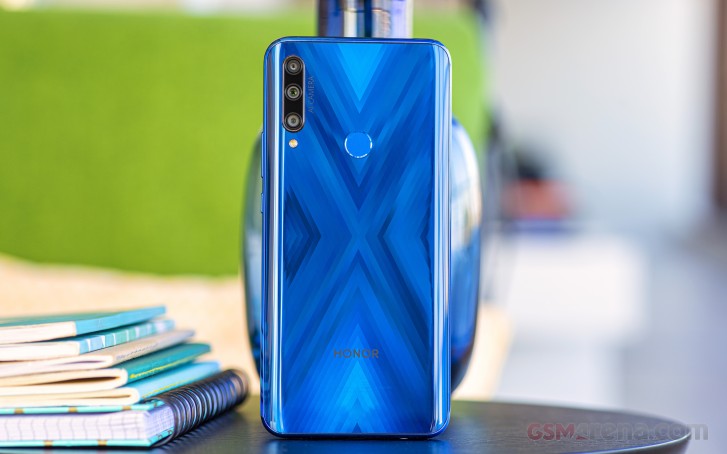 There is also a Midnight Black version if you are not into the X pattern on the back of the Sapphire Blue model. 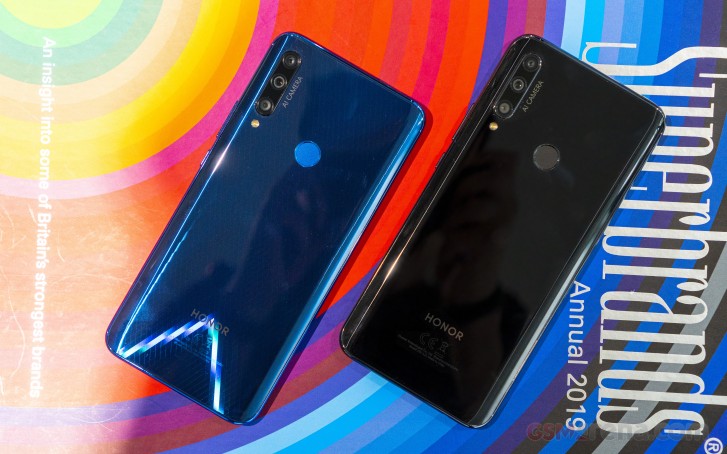 The rear glass is a bit curved towards the longer edges, which makes for a slimmer profile and better looks. Thanks to the X pattern the smudges and fingerprints are less visible, but still there and you will need to clean that glass occasionally if you want to keep the magical looks intact.

On the back is the triple camera humping just a little bit, but enough to make for some wobbling when the 9X is lying on a flat surface. The top snapper is the 8MP ultrawide, followed by the 48MP primary, and last is the 2MP depth sensor. The LED flash is flush with the back outside the camera glass. 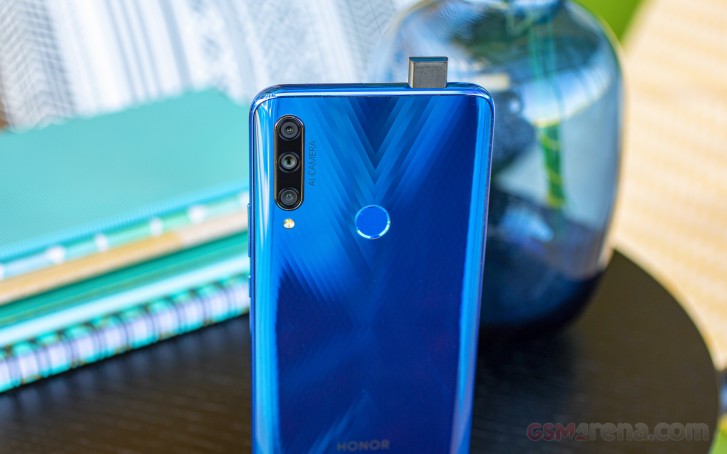 The round fingerprint sensor is also at the back,, and it's the usual always-on and blazing-fast piece we've used to work with already. The sensor can also be used for various system gestures, which can make Android operations a bit easier.

The frame between the panels is made of metal, probably aluminum, and is painted in the same Sapphire Blue like the back. It has a glossy finish, which sure makes it even more beautiful, but also a huge fingerprint magnet. It is also curved on both ends, so don't expect much grip coming from it. 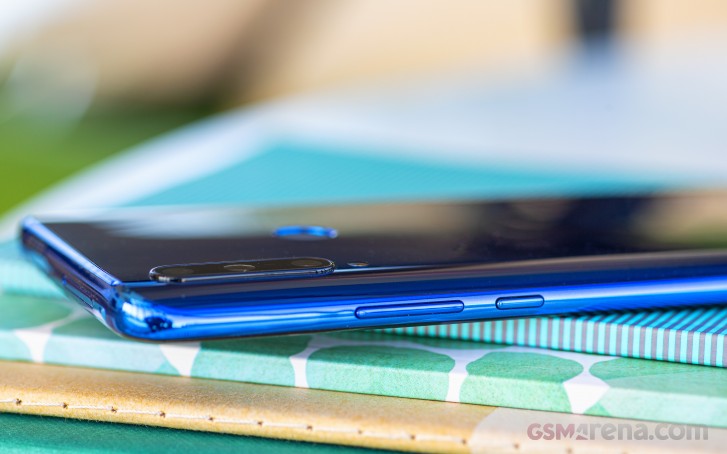 The Honor 9X has a lot going on around its sides - the pop-up selfie, the second mic, and the hybrid dual-SIM tray are on top; the volume and power keys are on the right; and the bottom has the USB-C port, the audio jack, the mouthpiece, and the loudspeaker. 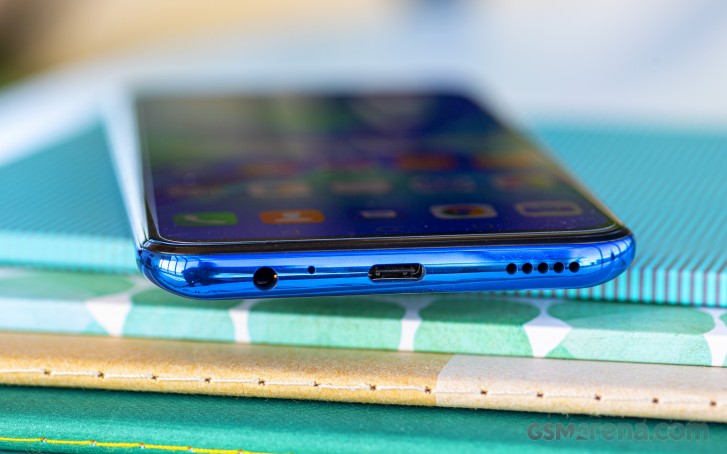 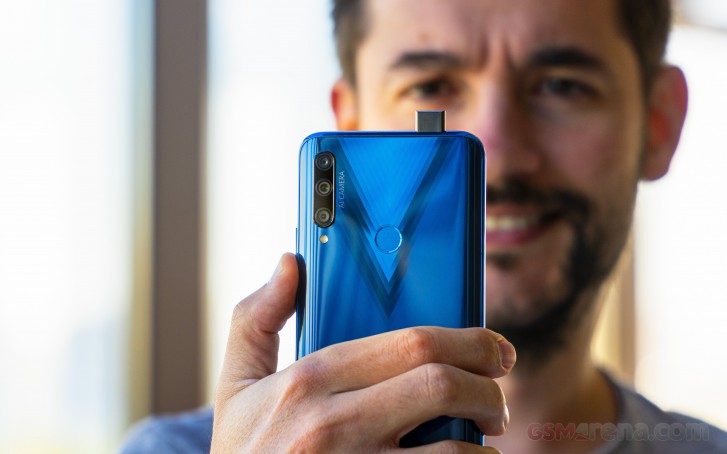 The Honor 9X is a pleasure to handle. It has a beautiful and flagship-worthy design, offers a sizeable, immersive screen that's an instant attention grabber, and while the body feels quite slippery - we still fans.