The HTC Windows Phone 8S packs a 4" S-LCD (that's first gen) of WVGA resolution (800 x 480 pixels). 233ppi give you pretty sharp images, even if the screen doesn't quite push the limits of human eyesight the way some of the flagships do (one of the HTC WP S8's stable-mates, in particular, the Droid DNA).

The image quality is pretty good for the class with excellent brightness and very good contrast. Colors are generally very punchy, but the blacks are nothing impressive and the viewing angles are average. Contrast is quickly lost and colors get washed out at the slightest tilt. It's nothing you can't live with though.


Sunlight legibility is decent, though the Windows Phone 8S is struggling in brighter environments.

Finally here's how the HTC 8S display matrix looks under our microscope. 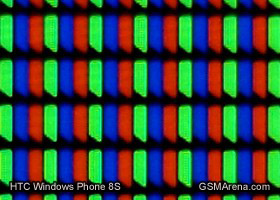 You get the mandatory three-button combo below the screen: Start, Back and Search keys are all capacitive this time. They have pleasant haptic feedback, which can be disabled if not needed.

The familiar three-button screen below the screen

There's no front-facing camera this time, so the earpiece is all there's to see above the display.

The right side of the HTC Windows Phone 8X has a volume rocker and the dedicated camera key. Both controls are reasonably comfortable to use with the shutter key having a well-defined half press. It will launch the camera even when the phone is locked and does so amazingly fast.

The camera key and the volume rocker are nicely comfortable

The left side of the HTC 8S is bereft of controls and ports.

Nothing to see on the left

At the top, you'll find the 3.5mm audio jack and the power key.

The power key is alongside the audio jack on top

The bottom of the HTC Windows Phone 8S features the microUSB port and the microphone pinhole.

The microphone and the microUSB port

The 5 megapixel camera lens is at the back, right next to the LED flash. The loudspeaker grille is all the way across, near the bottom of the matt back panel.

The camera lens and the loudspeaker grille

The color accent at the bottom is a removable cap that grants access to the micro-SIM compartment and the microSD card slot. Cheap storage expansion is great news and one of the few things the 8S offers over the 8X. Sadly, both HTC Windows Phone handsets have a non-user-removable battery, so an add-on juice pack is your only option to extend the phone's battery life.

The microSD card slot and the micro-SIM card slot

The HTC Windows Phone 8S is one of the best handling smartphones we have tried lately. It's nicely built, has those nice rounded edges that fit perfectly in the hand and is compact enough to allow single-handed operation. The finish is neat and practical, and the choice of paintjobs will be much appreciated.