The retail packaging for the Nexus 6P is unlike that you'd find on say, a Galaxy S6 or an iPhone (with the phone resting on top with the booklets, charger and headphones all crammed in the space underneath it).

It's a soft white cardboard box that feels like printer paper to the touch, wrapped in a large sleeve that has all the branding. Google's "P" logo is the post prominent logo on the box, while the Nexus and Huawei logos are more subtly placed.

Once inside, a flap of paper covers the neatly arranged components: the handset on the left, with the USB Type-C cable on the upper right corner followed by the 15W charger block right below it. Once the phone is lifted from its holder, we are greeted with a little tab that houses the booklets and Google Play Music trial information.

Underneath this, still, is a 6-inch USB Type-A to USB Type-C cable that you can use for transferring files with a PC or for charging with a power bank or non-Type-C wall adapter. Note that any other charger besides a USB Type C charger with 5V @ 3A will not charge this device at the maximum charging speed.

The Nexus 6 had two raised grilles on the front, which we liked a lot because it let us place it down on a table without fear of debris getting in between the glass and the table, potentially scratching the display. The Nexus 6P does not have those raised speaker grilles and we kind of missed them.

While the Nexus 6P's front features dual speaker grilles very similar looking to the 5X and Moto Nexus 6, the metal unibody is very much Huawei's design language. The camera setup and round fingerprint sensor were mostly design collaborations with Google.

The LED notification light is located just to the left of the front facing camera lens. Much like the Nexus 6, the Nexus 6P's speaker grilles give the front of the screen a horizontal line of symmetry that can sometimes confuse us as to which way is up or down.

When first picking up the device, it felt a bit heavy at 178g, sturdy, and its weight is quite well distributed. Unlike the Moto Nexus 6, our first instinct was to cradle it like an expensive vase to conserve its beauty. It just seems as though the metal unibody would be really easy to dent.

It might be worth mentioning that some bend tests were put up on YouTube of the Nexus 6P bending in half like a waffle. It wouldn't be fair for someone to make a decision not to purchase this phone based solely on a few videos of people abusively bending the phone, unless your intention is to purposefully use the phone as a bridge.

The Huawei Nexus 6P in hand

The front of the device has not much pretty to look at. It's actually quite boring, however, turn it over and there are many subtle curves that give it character and lots of chamfered edges to give the handset a sense of depth. The camera hump's glass also features a chamfered edge going all the way around.

An overview of the Nexus 6P's backside

The right side of the device features a textured power key, and a volume rocker key right underneath it while the upper left side is home to the nanoSIM card tray.

The underside is where the USB Type-C connector resides and the top edge shows access to the 3.5 mm headphone jack.

The rear of the device really is the most exciting side. There are a plethora of sensors, antennas and goodies to talk about. The "camera hump" isn't really as large as it looks in some of the pictures. The shading and contour of the metal exaggerates the hump in photos. It has the new 12.3MP Sony sensor with extra-large pixels for better details, dual LED flash, laser focus transmitter, and the NFC antenna.

Right below the black slab of camera glass is a noise cancelling microphone, and the fingerprint sensor is a little further down.

Way below the Huawei and Nexus logos is a plastic cover that houses an access panel of screws to get into the phone.

All four corners have small plastic insert strips that serve as "windows" for antennas to get signal from outside the metal body. 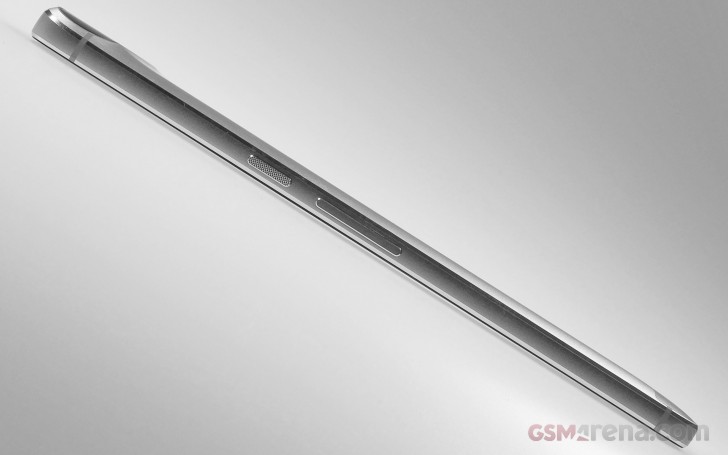 The attention to detail does not go unnoticed with the Nexus 6P, a very nice touch is the cross pattern on the power key reminiscent of some industrial tools. Even the power and volume keys have chamfered edges around them as seen above.