Huawei is holding a pre-IFA event in Berlin on September 1, which is this Thursday. While at one point we assumed we'd see the Mate 9 unveiled on that occasion, recent news purported to come from a Huawei exec said that wouldn't be the case. Instead, the company will allegedly out a phone in an entirely new mid-range series.

In the rumors this line has been referred to as Nova, although the final name could be different of course. Past mumblings also spoke about it being aimed at women somehow. 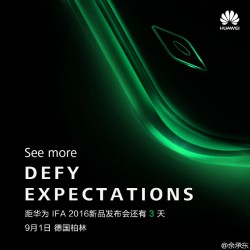 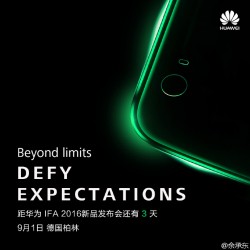 Anyway, on Weibo today Richard Yu, Huawei Device CEO, decided to tease not one, but two handsets that are due to get fully revealed on September 1. The two teaser images are above for your viewing pleasure (just click on the thumbnails for the full-size shots).

There's not a lot to tell about these phones just from their outlines, but they do both seem to have metal frames at least, while the one with the round camera looks like it has a glass back. The other model might too, but it could also employ a full-metal construction. We'll probably have to wait until Thursday to find out for sure.

kirin processors are amazing.The performance on the new kirin are really good and plus they do not eat the battery like snapdragon ones.I have used P8,P9,Mate S,Mate8 and the new P9 Lite with a new midrange kirin chip. And all were amazing.And pleas...

And just to correct you difference in release time between S6/S6edge plus with mate 8 is only 2 months( August and November) so the phones can actually be compared because there processors almost use the same Archtecture.