Benchmarks: is it twice as fast?

The answer is that very often that's just the case. In browsing, it leaves all other smartphones in the dust. There's the occasional tablet that can come close but that's it. In 3D gaming, it breezes past top-end Androids.

According to the Geekbench suite, the iPhone 4S outperforms the iPhone 4 by a pretty wide margin. When it comes to multithreaded tests, the 4S does actually perform twice as good.

The iPad 2 (which uses the same chipset) scores higher because it seems to run on a higher clock speed. Apple wouldn’t give exact numbers, but here's what the results show.

In single threaded loads, the iPhone 4S has a small advantage over the iPhone 4, but is behind the iPad 2. Still, when it comes to multithreaded tests, the 4S is a lot closer to the iPad 2. 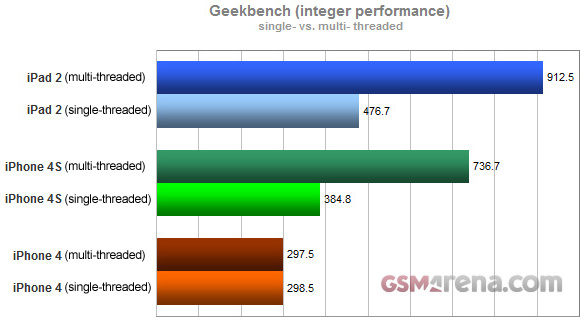 Moving on to 3D performance, the GLBenchmark runs on both iOS and Android, which makes it a good common ground for comparison. We're comparing the "offscreen 720p" results, meaning the graphics were rendered in a 720p frame buffer, regardless of the actual screen's resolution - that puts all devices on even ground.

The iPad 2 has the lead, but when you compare the 4S with smartphones rather than tablets, it's scary fast - the Samsung Galaxy S II has one of the most powerful GPUs in the Android world and it's quite a bit behind the 4S. The iPhone 4 just can't compete - Apple delivered the 7x improvement in graphics they promised. 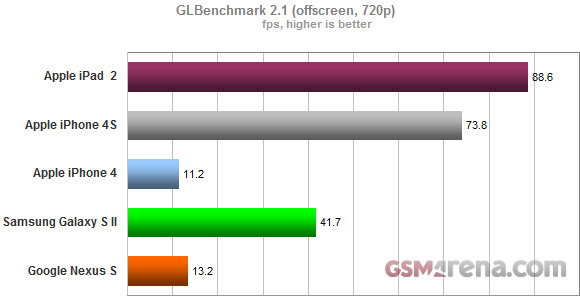 The browser is another area where the iPhone 4S excels. Results for both raw JavaScript performance (SunSpider) and the JavaScript + HTML performance (BrowserMark) are through the roof, with Android dual-cores lagging behind. We'll chalk that up to Apple's software genius, as the CPU alone can't account for the performance gap we're seeing. 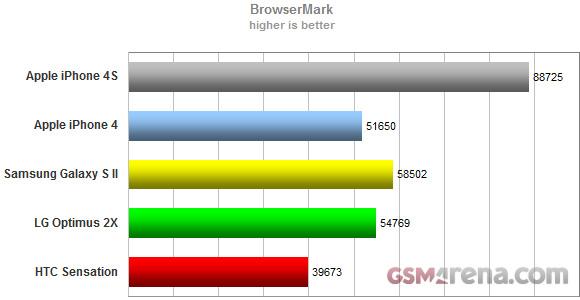 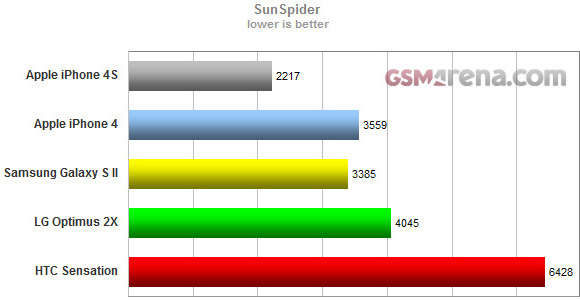 To upgrade or not - our advice

Either your contract is up or you prefer having the latest and greatest from Apple - either way, you're wondering if getting the iPhone 4S is a smart move or whether the iPhone 4 is the better deal.

People who are upgrading from an iPhone 3GS or earlier or don't have an iPhone at all but want one should skip over the iPhone 4 and go straight for the 4S. The $100 you'll save are not worth it in the long run.

But what if you have an iPhone 4 in your pocket right now? Well, if that was your primary camera so far then getting the iPhone 4S is a worthy upgrade. As long as you're fine with using twice as much memory for the same number of photos and videos you shot before since you can't switch to a lower resolution. Some computers might choke on the FullHD video too, which is another potential headache.

Siri is cool, we saw that for ourselves. But it's usefulness is greatly diminished outside the US due to two things - it refuses to search for businesses outside the US and very few languages are supported. Your English needs to be spot on too, accents don't go very well with Siri. Still, for US citizens Siri is all sorts of cool (if you're not shy about talking to your phone that is).

One more thing that can make the upgrade a no-brainer is if you've been having reception issues with the iPhone 4 - there will be none of that with the 4S.

So, here's the final verdict - iPhone owners in the US will have to make a few concessions (not many, really) but getting the iPhone 4S is a smart move. For everyone else, it's less clear cut but an upgrade is still encouraged if you can afford it.