A new report offers more details about the Sony Xperia 1's camera prowess. For the first time, it appears that Sony has found a new partner to manufacture the module on its smartphones, despite the fact that the manufacturer supplies sensors for the majority of all major smartphones, including flagships, these days.

An image of the triple camera module has leaked on a Chinese website and upon closer inspection, the word “MILVUS” can be spotted on the module’s circuit ribbons. It just so happens that Zeiss offers a lineup of lenses with the same name, thus suggesting that each of the three lenses (wide, zoom, and ultra-wide) will be manufactured by German lens manufacturer, Zeiss. 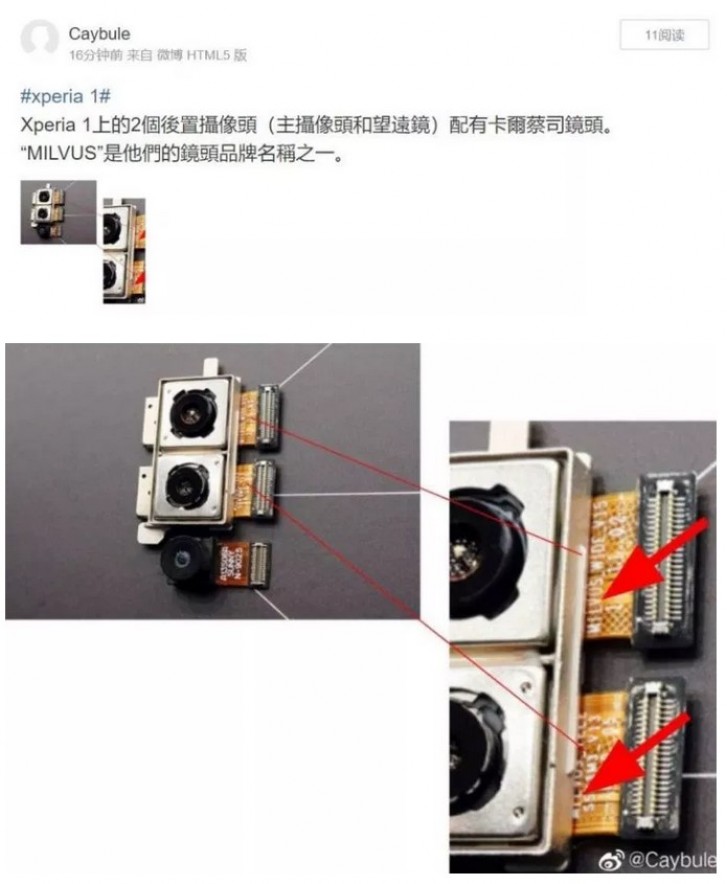 Sony has worked with Zeiss in its other businesses, particularly in its consumer point-and-shoot Cybershot cameras. It also made lenses for Sony’s higher-end Alpha series mirrorless cameras. The same report also points to a Samsung-made camera sensor with possible Sony Alpha know-how to make a top-of-the-line camera experience.

The Sony Xperia 1 is expected to make a splash for the Japanese hardware maker this year. The phone was first announced back in February during the MWC and we’ve yet to hear about its availability. Currently, the phone is rumored for June.

The Xperia 1 will have a 4k+ resolution, 6.5-inch OLED display on a 21:9 aspect ratio. We’re also expecting to see a 5G variant come at some point. Check out our hands-on from this past MWC where we got to take a full look at the hardware.

I never denied that Samsung uses Sony sensor. They do. But they also do use their own sensor. Care to answer why other brand can't get the same sensor as soon as Samsung gets it from Sony and also which phone used DUAL pixel AF after Samsung a...

Samsung use Sony Exmor since Galaxy S6. The first introduced Dual Pixel on a phone, the S7 using Sony IMX260. - https://m.gsmarena.com/samsungs_dual_pixel_tech_is_like_canons_dual_pixel_auto_focus-news-16805.php Like I said earlier, check the Ex...

Actually dual pixel tech was introduced with an ISOCELL sensor first. Sony may have taken the design from Samsung. Because Samsung was the only brand to use DPAF in 2016 with S7 and no other brand got their hands on that sensor in 2016. Some ...