The T-Mobile G2x went official last month but we still don’t have an official launch date. We do have an unofficial one though thanks to some leaked materials from T-Mobile - next Friday, 15 April, is the purported launch date.

The Tegra 2 powered droid is the T-Mobile cousin of the LG Optimus 2X. As such, the T-Mobile G2x packs a dual-core 1GHz CPU, 8MP still camera with FullHD (1080p) video recording. 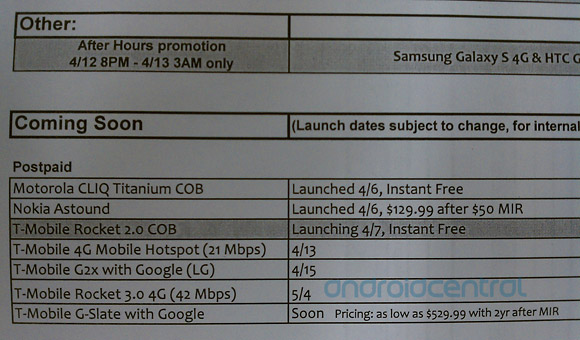 How much those specs are translated in terms of money is not clear at this point, but if those leaked materials are legit (and even if they are, they are subject to change) we’ll be seeing the G2x hitting T-Mobile shelves by the end of next week.

Speaking of money, the T-Mobile G-Slate (an LG Optimus Pad variant) is coming to T-Mobile stores “soon” for $529.99 according to the same leaked materials. And it’s bringing its 3D-shooting dual-camera with it.

We don't know if 3D will become popular on mobile phones, but we're interested what you use your phone for right now - tell us by taking our survey.

This phone is faster than Optimus 2X. Heard it will be around $500.

Does the nomenclature really matter? The G1 didn't have a physical keyboard, either. Both the G1 and G2 were made by HTC, and this is LG. At an announced $500 off-contract and $200 with 2-year commitment, I plan to get this if the performance revie...