We’ve seen purported screen panels of the Nokia 7.1 Plus (aka Nokia X7) twice now and both times without a notch. However, the first renders of the device show a mid-sized notch – not iPhone wide, but not teardrop either.

Which leak is correct? These images claim to be official renders and the other two X-series phones do have notches. Anyway, the screen in the image has a 19:9 aspect ratio (not accounting for the rounded corners) and the likely resolution is 1,080 x 2,280px. The size is unknown as the earlier reports of a 5.9” diagonal are now suspect. 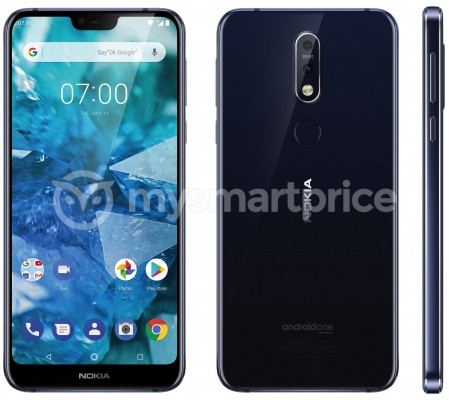 The rear is pretty interesting with a dual camera with Zeiss optics. While the Nokia 7 Plus has a Zeiss camera, the 6.1 Plus (X6) and 5.1 Plus (X5) do not, so this will be a first for the series. The fingerprint reader is positioned below the camera, despite a roomy chin on the front.

Also on the back is the reassuring Android One logo, which promises a good software experience. The Nokia 7.1 Plus is expected to launch with Android 9.0 Pie out of the box. It should run on a Snapdragon 710 chipset with 6GB of RAM (though that might well be region-dependent). The battery capacity is unknown, but the phone should support 18W fast charging.

There’s no reliable info on when the Nokia 7.1 Plus/X7 will launch. Q3 is nearly over, but the holiday quarter would be a good time to launch. There’s no word on pricing either.

When launching in india

All the panel leaks so far showed no notch.. I believe this is just a fan rendering.. So fingers crossed NOKIA won't join the notchapocalypse