Kudos to LG for making a non-ugly triple camera setup! The three modules, spread out horizontally on the back, share a single glass window and we're quite okay that the flash didn't fit in there. 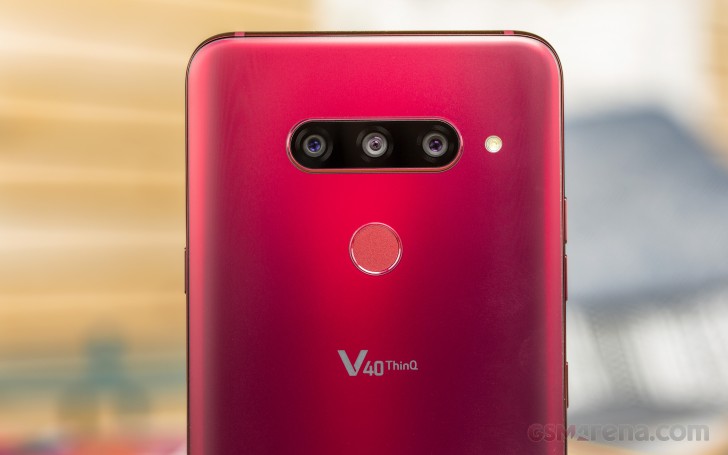 The whole assembly sticks out just a bit, but fret not - it won't catch the seams of your jeans pockets. And being centered on the back, the camera bump won't be causing any wobbles either. 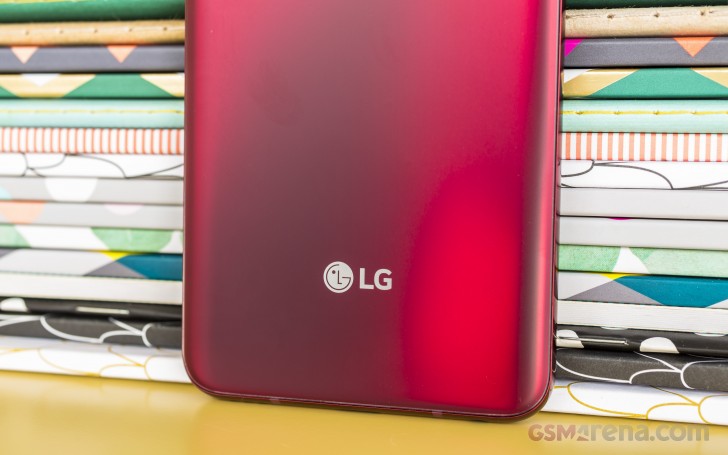 Since we're lucky like that, we got the Carmine Red color, which isn't your usual shiny glossy glass, but is sandblasted to a silky smooth matte finish - it's still glass, though. We do also have the Aurora Black around so we can compare and contrast the pros and cons. 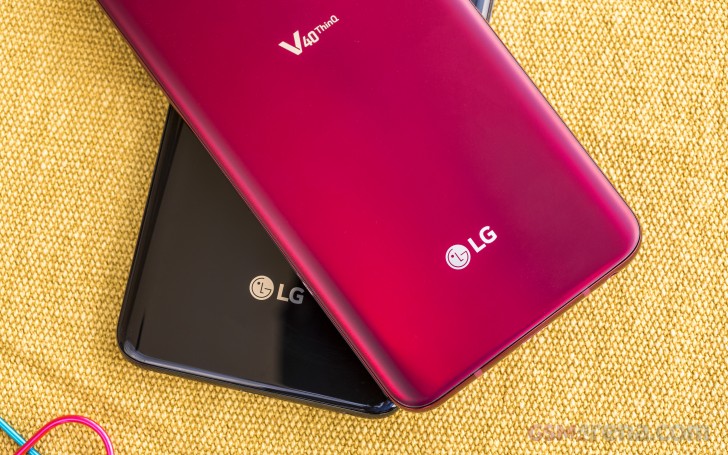 A minor advantage of the black one is that the camera module doesn't stand out quite as much - it is, after all, black on black. That's a price we'd gladly pay though - black doesn't have all that much character plus the glossy glass is an open-doors party and every fingerprint smudge is invited. 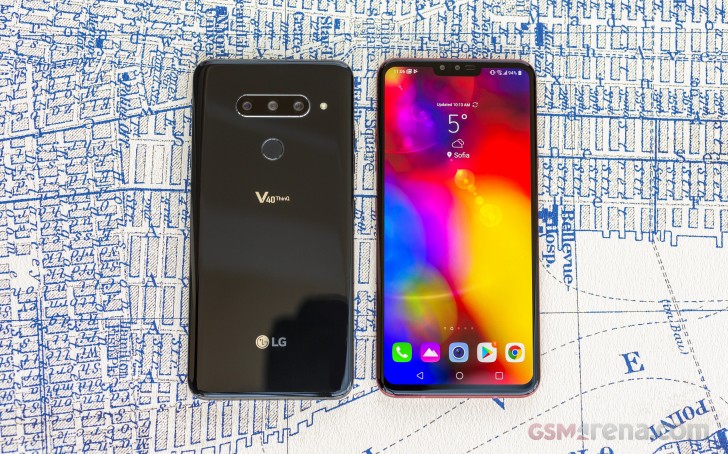 Now, that red, that's a different story. First of all, it's never the same shade of red, depending on what angle you look at it from, the ambient light, and the alignment of the stars, for all we know. The fact that it's matte also means that it doesn't attract fingerprints. The flip side is that it's slippery - like, really, really slippery. The polished frame isn't much grippier either so you'd better do the Neil deGrasse Tyson routine to make sure you avoid drops. 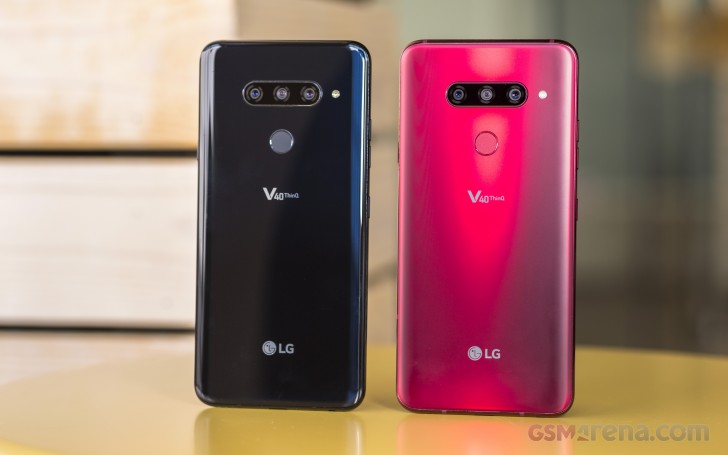 There's a bunch of buttons, sprinkled around the frame - two more than on the V30. One is the power button on the right which appropriates this function from the fingerprint reader on the back - no more clicky action there. The other is the non-Bixby extra button on the left for summoning Google Assistant. There are also volume buttons above it, two separate ones as opposed to a rocker. That's actually the same arrangement as on the G7, it's just that it's new on the V-series. 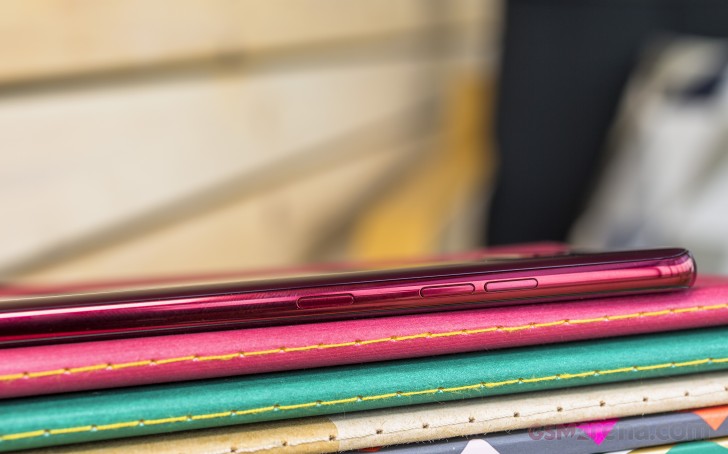 A common theme for all four buttons is their general mushiness without any positive click feedback. The power button is also a bit too high requiring some extra stretch, and it all makes for a less than ideal experience. You'd be unlocking with the always-on fingerprint reader in all likelihood, so it shouldn't be too much of an issue. 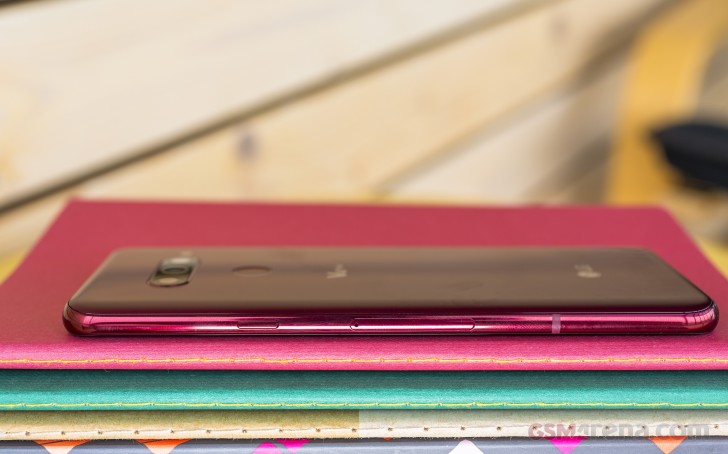 The card slot is on the right too, below the power button. Single SIM versions of the phone, like this one here, will take a nano SIM and a microSD card, while dual SIM versions will have you choosing between the second SIM and the microSD. 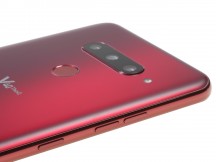 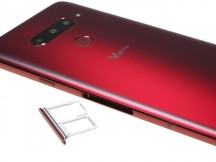 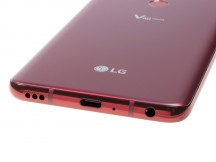 Volume and Assistant on the left • Power and cards on the right • USB-C and 3.5mm jack on the bottom

Down on the bottom, you'll find the USB-C port and a 3.5mm headphone jack - that last one has been relocated from the top where it resided on the V30. The G7 already had it on the bottom too. It's in these quarters you'll also find the loudspeaker and the primary mic, while a second mic is the only thing up top. 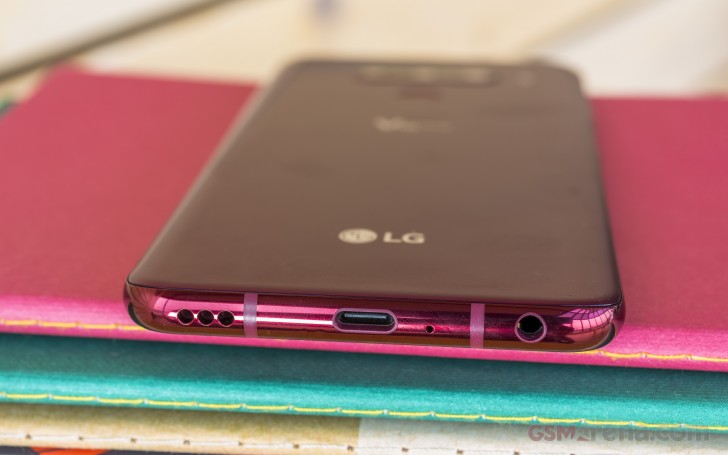 And that finally brings is to the front. The 6.4-inch OLED display dominates here, the largest diagonal on a V-series phone yet. It also happens to be the largest by area - even when accounting for the V20 and V10's secondary screens, and the V40's notch. 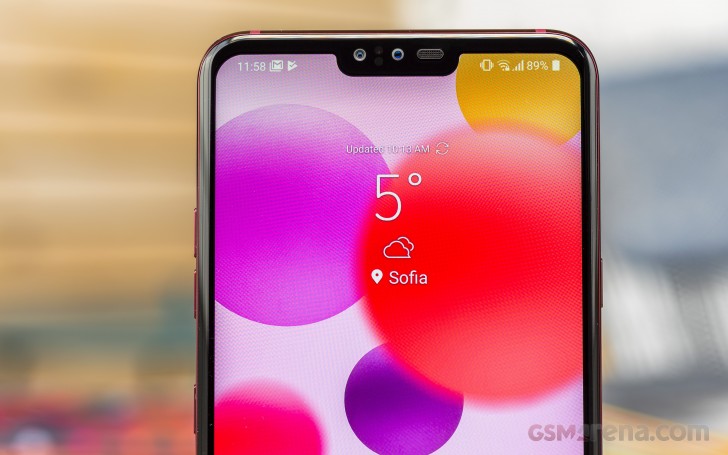 It's, you know, a lot like every other phone right now, with a cutout up top to house the mandatory bits that need to be up top. That includes the irksomely off-center earpiece that's been nudged to the right to make room for the pair of front cameras. Right in between the two cameras are the ambient light and proximity sensors. 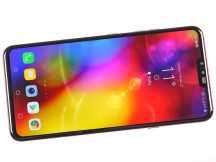 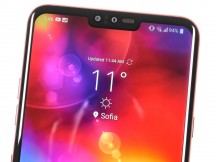 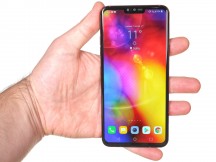 6.4-inch OLED display on the front • Off-axis earpiece • In the hand

One issue we have with the overall design on the front is the bezel size. Or rather, the different thickness of the sides compared to the top - it's barely noticeable, but once you do notice it, you can't unsee it. Or it's just us that are broken and no sane person would care. The chin is even thicker still, but we've sort of developed a tolerance for differently-sized chins more so than foreheads. 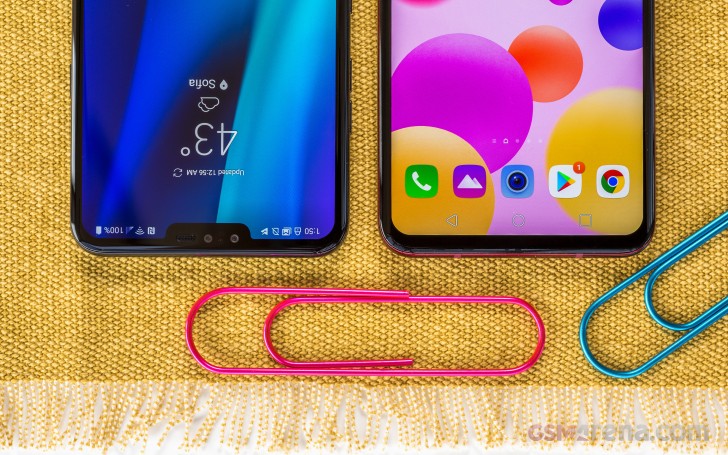 The front is covered with Gorilla Glass 5, which is also what protects the back, frosted as it may be. The phone is IP68 rated for dust and water protection, and it's also passed one of the tests for resistance to transit drops covered by the MIL-STD-810G military standard. 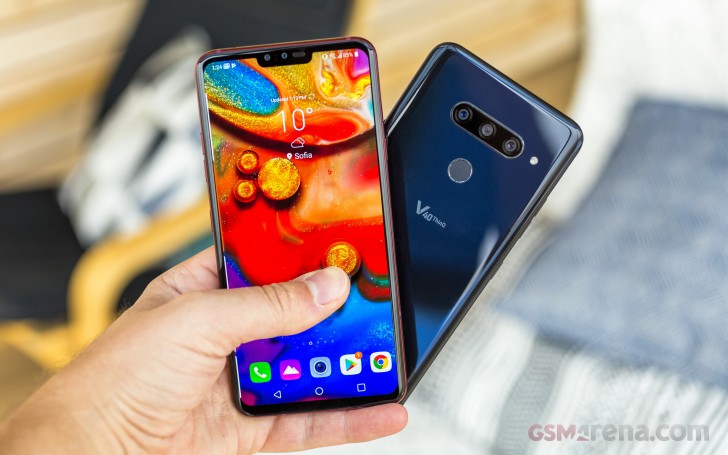 For all its advertised toughness, the V40 is remarkably light at just 168g just as other LG flagship phones in the recent past. Competitors are typically heavier and the Mate 20 Pro and the Galaxy S9+ coincidentally both weigh in at 189g. The V40's got a rather average footprint for the class, but is a millimeter thinner than either of these two above - then again, it's got the smallest battery, too.