The Nokia Lumia 1330 is not exactly official, but Microsoft Indonesia is already teasing the mid-range Windows Phone phablet. It's advertising the dual-SIM connectivity, which will come in LTE and 3G versions. LTE-enabled dual-SIMs are rare, this will be the first Lumia to do it.

Other versions include three single-SIM options – one with LTE-Advanced, one with regular LTE and one with just 3G. They will have a 5.7" 720p screen according to leaked benchmarks, though those are not very accurate so the Lumia 1330 can still have a 6" screen like its predecessor. 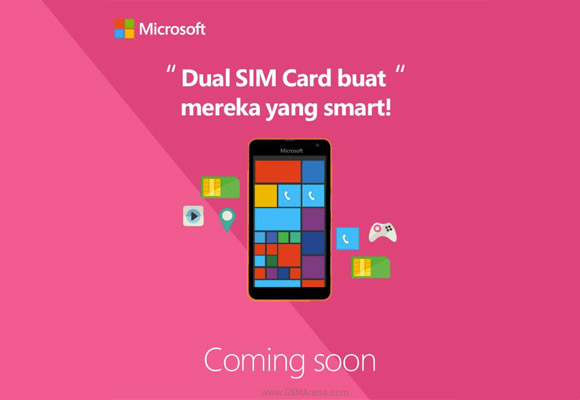 It will have a much better camera though, the current expectations are for a 14MP shooter with Zeiss optics and 1080p video, plus a 5MP seflie camera. So far, so good though the chipset is rumored to be a Snapdragon 400 with 1GB of RAM, which doesn’t sound terribly exciting.

Anyway, the teaser just says "Coming soon" and with a Microsoft event scheduled for the MWC (on March 2) we just might see an official unveiling in a couple of weeks. Or the event could be just about Windows 10.

Well fortunately in Indonesia, Microsoft Devices aka Nokia always selling an unlocked phone. So i bet this Lumia will coming for all carrier. But, that's in Indonesia. I don't know about other country or region.

Make it available to all carriers and make money.

Adding to my comment (1st one in the trail), I'm just trying to say that MS will price ridiculously anyway.. so why not make it a value for money from the end-user's POV. Afterall same chipsets, (seems like design's also the same).. you've gotta give...