The Motorola DROID RAZR HD is equipped with a stock Android ICS gallery. The Default view of the gallery is Albums - it lists all folders with photos in the phone. Rather than the familiar stacks, the app uses a grid of photos, which are two per line.

The video player of the DROID RAZR HD is the stock Android one. It supports most popular video formats such as XviD and MKV. You can access the videos straight from the gallery app - there's no dedicated video player button.

The screen of the Motorola DROID RAZR HD (as the name suggests) is perfect for consumption of video content. Large files are also handled easily by the device.

The Motorola DROID RAZR HD comes with the latest Music app by Google. It has the same side-scrollable tabs like much of the other stuff in Ice Cream Sandwich. Naturally, it offers a link to the Google Play music store as well.

The Motorola DROID RAZR HD audio output was very similar to that of its smaller brother - the DROID RAZR M. Save for the slightly shaky frequency response, the smartphone did well in our audio quality test.

It offers very good signal-to-noise and dynamic range scores as well as low distortion levels and very little stereo crosstalk. Add the excellent volume levels and you get a really solid overall performance. 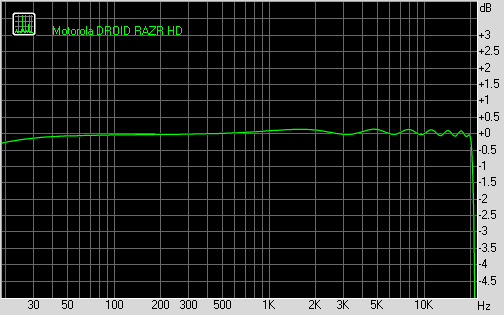