The Moto X Force isn't exactly a brand new model - it was announced back in October as the Droid Turbo 2 for Verizon and was later released as the X Force for the global markets. But availability back then was limited to certain markets. The fact that Moto is owned by Lenovo now is proving beneficial to the brand as Lenovo's supply chain can bring Moto phones to a wider range of markets. The wider availability is one of the reasons why we turned our attention to Moto's current flagship now.

Today, half a year later, the Moto X Force is what you'd call a pricey flagship on its way to retirement. It's still a flagship device by all measures - with a great display and camera, even if with a controversial, yet sufficiently powerful chipset.

The performance is great, as is the battery life. The camera samples are one of the best we've seen, though image quality in the low-light scenes was disappointing.

There hardly was anything to ruin our overall positive experience with the phone except perhaps the overeager pricing level. 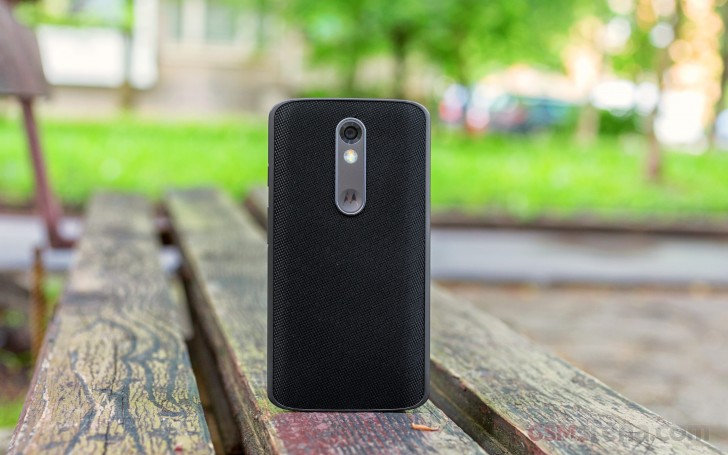 The Moto X Force was built to last longer than most modern flagships, so it may be one to keep. The question stands, though, is it targeting users who are likely to keep their smartphone for four years? Is any big maker interested in this kind of users anyway?

We're not implying that the 4-year guarantee is a gimmick - especially considering Motorola had to sacrifice stuff like a fingerprint scanner to achieve the level of protection advertised. That said, the Moto X Force isn't officially certified for being shockproof or water-tight - yet users are promised that the screen is covered for at least four years and will be replaced or repaired for free.

The Snapdragon 810 phones are aging and getting cheaper, so when coming up with potential alternatives to the Moto X Force, we'd like to start with a bunch of those. The LG G Flex2 is available at half the price of a Moto X Force and stands out no less with its curved chassis and self-healing rear coating. The OnePlus 2 with its sandstone back is a viable and more affordable alternative as well.

The Sony Xperia Z5 is water-proof and has a great screen and camera. The S808-powered LG G4 and its leather case is a real bargain, plus it matches the screen resolution and offers a very capable camera itself.

The Galaxy S7 is water-proof, with one of the best AMOLEDs on the market and probably the fastest and yet most power-efficient hardware to date. The camera is great, the battery life too, while the TouchWiz has become a lot better with plenty of bloatware cleaned up. The S7 edge with its bigger and curved screen is almost like a piece of jewelry next to the rugged Moto X Force but looks way too fragile. And it costs a lot more.

The Huawei Nexus 6P is what you get for the complete Nexus experience. It has a similar screen, the same chipset, though the main camera is hardly a match for the X Force. The Nexus 6P costs as much as the Moto X Force, but won't give you the same level of protection or still image quality.

Finally, the Meizu Pro 5 is still one of the best alternatives from China. It has a very good 5.7" AMOLED screen, equally powerful hardware, a similar camera, and an all-metal body. Thanks to its power-efficient chipset it also scores excellent marks in the battery tests.

To sum it up, there're plenty of worthy contenders to take the attention away from the Motorola Moto X Force. Some of them brand new flagships too while the X Force has been around in some markets for a good six months already.

Yet, clearly, the Moto X Force isn't going to try and impress users who go for the next big thing every season. It was built to last and then went on to tick most of the big hardware checkboxes: screen resolution, chipset, camera, and battery. The result is a solid performer that gives its owner a peace of mind and doesn't stop when the going gets tough. Brand new, exquisite flagships with everything and the kitchen sink will always be in higher demand we guess, but the right people who need smartphone performance in rough conditions have a solid option to consider in the face of the Moto X Force.