OLED finds its way to the Moto One series

Motorola has more than plenty of experience with OLED panels. However, seeing one in a Moto One device is a new development. The tech has so far been reserved for flagship Z-series models. This serves as yet another proof that the Moto One Zoom can be considered a flagship in the company's current lineup.

Motorola's panel of choice is pretty good too. Especially if you often find yourself in direct sunlight, phone in hand. The One Zoom managed an impressive 690 nits in max auto mode, outpacing most of its direct competitors. Thanks to zero light bleed in the blacks, the One Zoom also provides mathematically infinite contrast, which is what we want to see on an OLED. 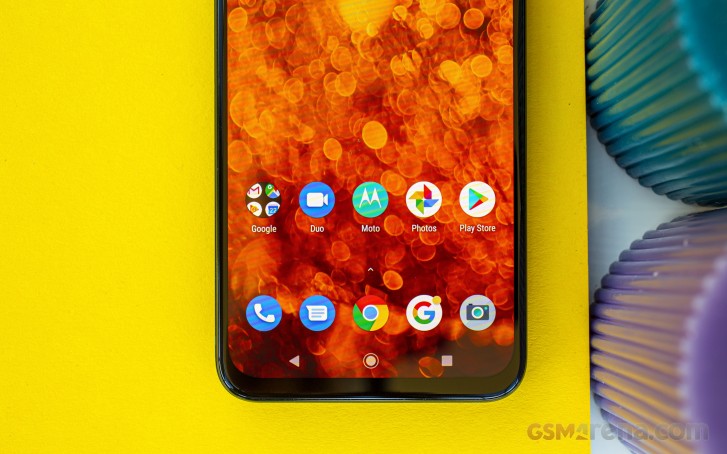 Colors are not exactly perfect in terms of accuracy. In its default "natural" color mode, the Moto One Zoom managed an average deltaE of 5.3 and a maximum of 8.3. Surprisingly, though, switching over to the punchier "boosted" setting brings up the blues to a level that offsets the constantly exaggerated reds, which makes for a more balanced overall profile and an average deltaE of 4.8 with a maximum of 8.2. Not too bad. And in the absence of manual white point adjustment, it's the best you can realistically expect. 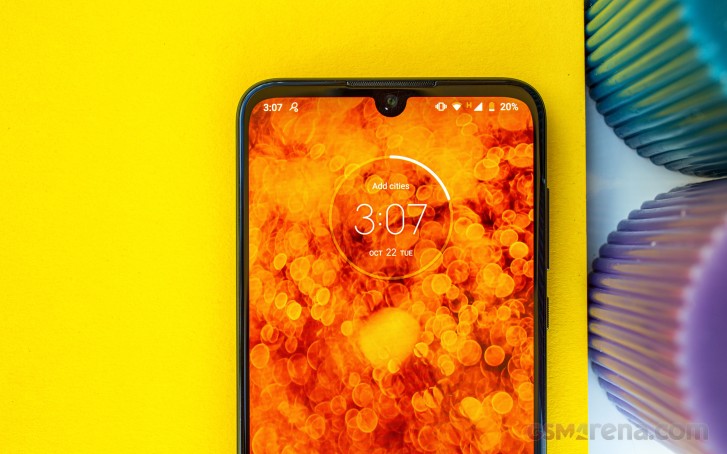 There is a third "saturated" option as well, which boosts color even past the "boosted" levels. This mode also activated an all-round brightness boost, bringing the maximum to 500 nits. It's a bit like watching a TV in demo mode at a store - cool for a while, but a bit too intense for our taste after a while.

4,000 mAh is plenty of juice for a modern phone. In our testing, Moto devices don't necessarily have the best track record when it comes to battery life with standby power draw being a particular pain point. Still, the Motorola One Zoom does a pretty good job managing its power needs. Just make sure you use the rear LED sparingly or better yet, have it off most of the time since it is kind of a power hog. 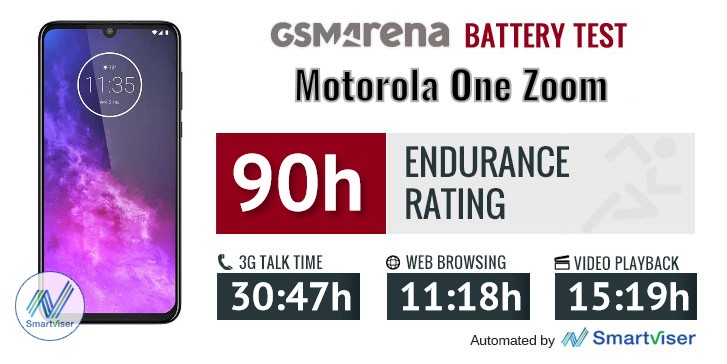 Our battery tests were automated thanks to SmartViser, using its viSerDevice app. The endurance rating above denotes how long a single battery charge will last you if you use the Motorola One Zoom for an hour each of telephony, web browsing, and video playback daily. We've established this usage pattern so that our battery results are comparable across devices in the most common day-to-day tasks. The battery testing procedure is described in detail in case you're interested in the nitty-gritty. You can check out our complete battery test table, where you can see how all of the smartphones we've tested will compare under your own typical use.

90 hours in our proprietary battery test routine is quite admirable. While not necessarily the most efficient option out there with its 11nm process, the Snapdragon 675 does perfectly fine in active calls. It falls a little short in standby, though, but it's far better than Moto's worst devices in this respect.

As for web browsing and offline video playback - both scores are decent enough, but still fall a bit short from what we would expect from vanilla Android running on a 4,000 mAh battery.

For charging Motorola has its own Turbo Power 15 standard with a power output of 15W. The provided charger in the box would charge the Moto Zoom from zero up to around 35% in half an hour and a bit over 70% in a full hour. And since Turbo power 15 is based on Qualcomm Quick Charge, chances are you can easily borrow a compatible quick charger for an equally fast top-off when you are in a pinch.

The Moto charger can be used on other Quick Charge-compatible devices with the same success. But, that's a less efficient setup since you only get the older Quick Charge 2.0 protocol out of the Moto Charger. That means no fancy, extra granular and dynamic voltage adjustment.

Like we already mentioned, the Motorola One Zoom has a single speaker at its disposal with a pretty unconventional placement - on the top bezel.

The speaker itself is good, but not really impressive in any way. Just shy of the "Excellent" grade in our loudness test, it can pump out some decibels. But, you probably don't want to listen to it blasting at max volume since there is plenty of distortion. It gets quite screechy.

The Motorola One Zoom posted the expected excellent scores when we connected its 3.5mm audio jack to an active external amplifier. Its volume levels were about average in this scenario but still adequate.

Impressively enough, the output was almost unchanged when we plugged in our standard testing headphones. Even the stereo separation was barely effected - something very few phones can match. The only thing affected was loudness, and the drop was enough to relegate it to the below-average group.