Now, this is probably the most important feature of the phone. Despite our eagerness to test it right at the beginning, we left it for the end. We were really excited to see if the device lives up to the expectations, which come with the Navigator name. As it turns out, the handset is well worth it. Pleasant surprises start with the very first glance and keep coming. The dedicated navigation key is a clear sign that, unlike most other GPS enabled mobiles, navigation is taken seriously here. The software itself is the next thing to amaze us. This time the Nokia maps software is neglected in favor of a third party application. If you think this is totally unlike Nokia, you are darn right, but this time the Finnish company has made a compromise and it's all in favor of the user experience with the Nokia 6110 Navigator. The Route 66 application is used and we have all the reasons to praise its navigation functionality. The program itself is embedded in the phone's firmware, while the maps and other data are loaded on the memory card. Further on, the program exercises Assisted GPS using data connection for quicker initial locking to satellites, the so-called cold start. Be aware that it involves a few kilobytes of traffic, so if you don't want to pay for that, you might prefer to switch the A-GPS off and rely solely on the GPS receiver.

Route 66, Navteq and Nokia have done a great job on the navigation software of the Navigator

The GPS receiver of the Nokia 6110 Navigator is doing a great job. It has nothing to do with the frequently criticized built-in GPS receiver of Nokia N95 and is far more enjoyable to work with. Being much more sensitive than the one mounted on Nokia's top multimedia device, the receiver of Nokia 6110 Navigator will find you practically anywhere. Tall buildings are not that much of a problem anymore and, in most cases, you will get pretty exact bearings even in areas where these are a common sight. Still, there will be situations when the phone won't be able to track enough satellites and the coordinates will probably lack in accuracy.

Overall, there are only a few minor issues in terms of GPS signal reception but these are fully compensated by the great Route 66 navigation software. It has extensive settings and great looks, as well as a huge number of route planning options. The routes themselves are also very customizable, so you can pick one that best suits your taste. For a small extra payment, you can unlock a few additional features such as traffic information and speed trap tips. This will help you avoid losing a few hours stuck in traffic or a few bucks on speeding tickets. Another feature that needs unlocking is the weather forecast, which may also be put to good use when calculating some of your routes. The maps for the areas that are not included in the retail package can be bought separately too. All the required purchases can be completed with the phone itself or on a computer.

Varios extras can be purchased in order to enhance naviagating expirience

Our impressions with the turn-by-turn navigation are also very nice. The selected voice (there is a male and a female speaker in almost any language) will prompt three times of the next action you need to take. One is a good time before the required turn is to be made, one just before it and one at the exact moment. There is an incredibly small chance to miss a turn, and still voice guidance is not at all bothersome and ear-hurting. If you still have doubts about being able to successfully navigate, you can simulate your route in advance to check when and where you will need to change direction or switch lanes.

Turn by turn navigations is working like a charm

Another cool feature of the Route 66 software is the possibility to enter an emergency road block on the map, which will force a recalculation of your route. A very handy feature in case you run into unexpected traffic jam or road works for example. Talking of it, we still haven't mentioned one of the best traits of the Route 66 software implemented in Nokia 6110 Navigator - the speed of calculation. Even very elaborate routes are calculated in the matter of seconds, while journeys around town appear on the display almost instantly. Recalculations that occur upon leaving the target route are also finished in a blink of an eye.

Some of the Route 66 route planing settings

If for some reason the built-in Route 66 application doesn't appeal to you, you can always download Nokia maps from the Nokia website. By the way, you can use any other navigation application. Frankly, we don't see any reasons for that, but who knows. 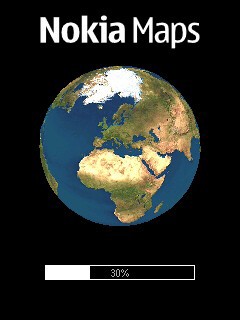 To summarize our experience with the GPS navigation performance of the Nokia 6110 Navigator, we have to say that it is almost perfect. There are only a few minor things, among which the display size, which make the give an advantage of standalone GPS navigation devices, but those are surely something everyone can live with. The recent acquisition of NAVTEQ by Nokia leads us to the thought that more Navigators are soon to appear and we are certainly waiting for them.

Summing up our impressions, the Nokia 6110 Navigator looks all set to be in the driver's seat. We certainly had a lot of fun doing the review. The Navigator is truly ambidextrous, offering great smartphone performance and full GPS functionality. Add the above average multimedia capabilities, and you have a tempting all-rounder. The crashes some Symbian phones just can't seem to help are not an issue here. For the time of our review we experienced none of them. The software stability of the device looks great, considered we pushed the phone to its limits. To us, the Navigator belongs among the best rated mobile devices. With a price tag of 350 Euro (before taxes or subsides), we guess it will be an intriguing offer, bringing smartphone performance and full in-car navigation capabilities. In case you are into Symbian smartphones, but don't necesarlily need GPS functionality you can also check Nokia E65 as a serious alternative. It offers Wi-Fi support and comes a bit cheaper than the Navigator. Of course, there is always the option of buying an external GPS receiver to work with E65, too.