Nokia 9 PureView is already getting a software update

HMD Global introduced the five-cam Nokia 9 PureView at MWC and it is already available for purchase in the United States. The company has issued an update in the first day of the market launch, bringing camera app improvements and the latest security patch, dated March 2019. 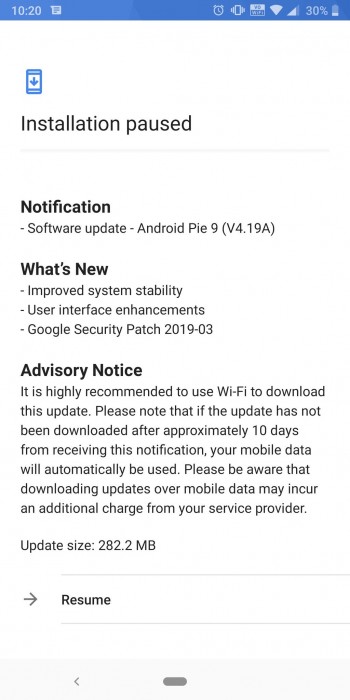 The arrival of the update was confirmed by Juho Sarvikas, Chief Product Officer at HMD Global. He said the package started rolling on Monday, so it should be available to most Nokia 9 PureView already. Thanks to screenshots from various users across the globe, we know the package is 282 MB and brings software update to Android Pie 9 (V4.19A).

The Nokia 9 PureView comes with five cameras on the back, coupled with a ToF sensor. There is a Snapdragon 845 chipset on the inside, as well as 6 GB RAM and 128 GB storage. Until March 11 the phone is offered for $599 at various US retailers, but after that date, it will be sold with the official price tag of $699.

If NON-Android One with bloatware is so fluid can please explain me? Why does a custom UI skin phone have a 8GB Ram and can perform same with Nokia's 4GB ram and same processor? I could know if you still required those apps why don't you download f...

I understand that your head by your gih opinion about Nokia and for you your explanations should satisfy you but it's just a centric point of view. I didn't provide any feedbacks on any brands and I invite no one to choose something in particula...

So let me guess, just because you have a problem (most probably it is called, a users Problem: it means? No ideea how to use an android device. Advice? Go use futurephones) it does not mean everybody has it. If you think they just install a raw softw...