The point of hubs is that they are the go-to place to do things, instead of apps. New functionality allows apps to integrate into the Pictures hub, so for example, a photo effects app can make its options available right in the hub. Devs need to enable that in apps however.

Albums feature the camera roll, the preloaded system pictures and all of your Facebook albums. A flick to the left shows all your pictures sorted by date. You can't choose what albums the individual camera roll photos go to, though.

The people section is where you can select your friends so that their Facebook galleries get displayed right there in your Pictures hub. It's a nice feature for social network users but will be only an empty section for those that aren't too fond of Facebook.

The camera roll brings together your entire collection of photos and videos, taken with the device, in a 4x5 grid. You cannot change the layout. Photos can be viewed in both portrait or landscape mode. Zooming in on a photo is done by either double tap or pinch. We appreciate it that the camera roll doesn't downsize pictures and you can enjoy them in full resolution.

Windows Phone 7 used to be quite limited in terms of sharing - it's still not perfect (photos get downsized before emailing, for one) but you can now share videos too, either via email or on Facebook. Sharing options include messaging, email or Facebook. SkyDrive is not an option though, due to the 256MB of RAM.

You can set a single photo as background for the hub or you can set it to shuffle different photos.

The video player doesn't recognize .AVI files - in other words, don't expect DivX or XviD support. However, the Zune software on your computer will automatically convert such files to .MP4 - so, you can watch those formats on the Lumia 610, it's just that the transfer to the device can take quite a while (depending on your computer's capabilities). And of course, HD videos are another casualty of the limited RAM.

You can pin individual items to the homescreen - like a song or video, even an FM radio frequency.

The media players reside together in the Music & Videos hub, which sports the Zune logo. When you start it, it shows the History, giving you quick access to the last two items played, or you can go to the full menu and start the music or video player, listen to/watch podcasts (both audio and video podcasts are supported), start the FM radio or go to the Marketplace.

The music section is made up of albums, songs, playlists, genres and artists. Videos features all, television, music videos, films and personal - think of them more like categories you can assign your videos to when synching with Zune. The third section is podcasts where you can store all of your downloaded audio and video podcasts.

The music player has a simple and straightforward interface, you won't have any difficulties using it. However there are some things missing, like an equalizer. Another missing feature is the ability to scrub through a song with your finger - you have to press and hold on the FF/rewind buttons to simply jump back and forth.

The favorite, repeat and shuffle buttons are on the side of the album art.

You also get radio and marketplace links in the Music & Videos tile. It doesn't offer the option to listen to online radio so you would need to insert the headgear to get reception.

You have the current frequency in very large digits - swiping left and right changes the frequency and a swipe and release automatically searches for the next available station in that direction. You can mark some stations as favorites, which will let you pin them to the homescreen. RDS is enabled and so is playing through the loudspeaker.

As a music player, it's pretty standard - your tracks are sorted by artist, album, playlists or you can view all songs. The interface is very similar to that of the stock music player, but under the album art it lists the next three songs lined up - really helpful if you're using shuffle. There's no way to manually reorder the upcoming songs, but you can reshuffle them if there's one you don't like.

The location-aware feature is called Gigs - as the name suggests, it finds concerts near you. It's region dependent and may not work everywhere.

The Nokia Lumia 610 audio output is much better than the Lumia 710, which is pretty good news. Since its bigger brother was one of the worst performers we have seen, we were worried the Lumia 610 will be downright disastrous, but fortunately that wasn't the case.

The frequency response had its extreme bass frequencies cut off with both headphones and an active external equalizer, but was spot on for the rest of the range. The signal-to-noise and dynamic range readings were great on both occasions, though.

The total harmonic distortion was good with no headphones attached, but worsened quite a lot when we plugged them in, while the intermodulation distortion went from above average to high. Stereo crosstalk started off as great, but dropped to average with a pair of headphones, which is also what we would say for the overall performance of the Lumia 610 here. 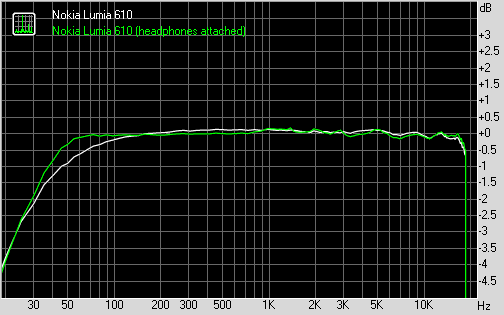