HMD Global is expected to announce a new midranger on May 16 in China. The phone will be named Nokia X6 and will sit between Nokia 6 (2018) and Nokia 7 plus in terms of specs. Yet, according to latest leak, it will be more affordable than both of its siblings.

An image appeared on Weibo, suggesting that the Chinese retailer Suning will offer the device for CNY1,499 - the equivalent of €200/$235. 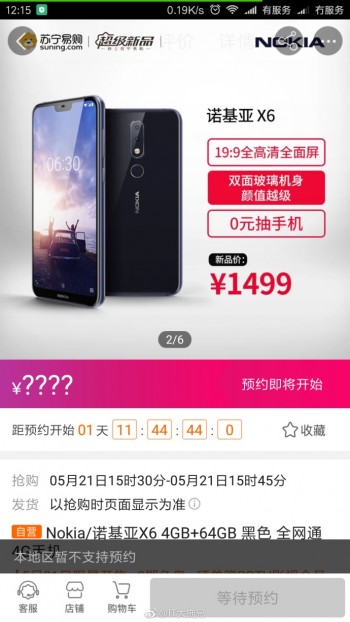 The dual camera setup will have a 16 MP primary snapper and the selfie camera should have the same resolution. Back at WMC, no less than eight Nokia devices joined the Android One program for early security updates and the X6 is most likely to join the list.

AWKWKKWKW more and more brand use decently strong SoC for sub-$300 brackets. 2 years ago I bought mi5 (SD820) one for $220. throttling AF due to heat but fixable with custom kernel. It was a steal, got stolen by darn thief tho....

Once the king and low end cheap phone made in china