You are going to be reading this a lot as we examine the phone, so we might as well kick things off by saying mostly nothing has changed about the retail box. In fact, we think the only thing is a small "T" added to the printed logo on either side.

The rectangular, two piece package still has that signature OnePlus look. In a way, it is very clean and streamlined, like what you would expect form Apple or Xiaomi, with lots of white and uniform surfaces. Most are soft-touch as well for extra refinement.

The signature red color accents are still prevalent throughout. There is the big red OnePlus logo on the front as well as a thin red data cable. In fact, the whole bottom half of the box is painted in bright red.

OnePlus also throws in a DASH charger, rated at 4A at 5V and the compatible DASH cable. Both are required to get the fast charging system going. This is the case, since, the cable itself uses a non-standard scheme for some of the pins. Currently, most custom charging solutions rely on some custom pinout or other sort of trickery, while generally maintaining compatibility with standards as well, so there is no room for scolding OnePlus on this point alone. The whole industry needs to work this out, especially if we are going to safely transition to the new Type-C connector standard. 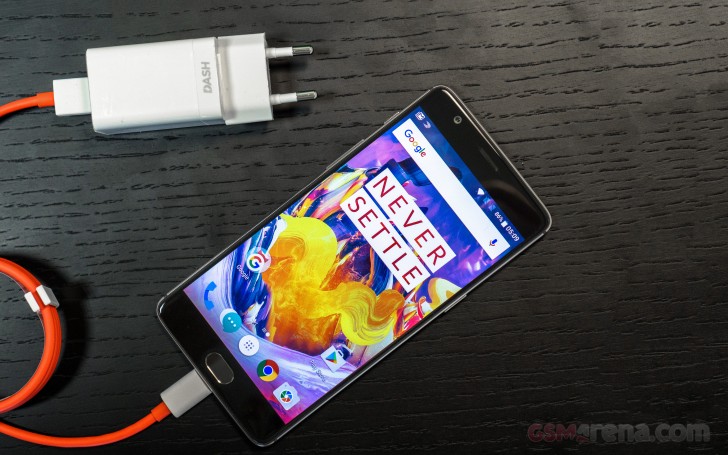 Speaking of which, one thing we are perfectly willing to hold against OnePlus is the fact that despite the Type-C connector, the OnePlus 3T still uses USB 2.0. While allowed by the standard, we would have really liked to see the OEM fix this widely-discussed aspect of the original OnePlus 3. Then again, it might be an issue of savings.

DASH is actually a custom version of Oppo's VOOC technology, which we still believe is the industry leader when it comes to fast charging. OnePlus advertises a zero to 60% charge of the 3400mAh battery in just 30 minutes and to our surprise, we actually managed to get pretty close to those numbers.

That being said, many might be interested in picking up the OnePlus car Dash charger. It is currently going for around EUR 30 on the official store.

Moving on to the actual handset, there is no point beating about the bush - it is literally the same. This is no criticism, as with a metal unibody design, measuring 152.7 x 74.7 x 7.4 mm and some signature curves and elements thrown here and there, it works for so many fans already.

The only real outward change is a new color. OnePlus decided to replace the Graphite finish with a darker one, it is calling Gunmetal. It comes down to personal taste, but we think it looks even better on metal. The other color option remains Soft Gold. Besides the metal back, it also swaps the black front with a white one.

Just like its sibling, the OnePlus 3T is a gorgeous device. It is molded out of a single piece of space-grade aluminum, which combines strength with elegance and is just so great to the touch. It measures only 7.4mm in depth and tips the scale at 158 grams. We can't fail to mention that the bigger battery pack not only came at no expense in terms of volume, but weight as well. That is some advanced battery magic, if we ever saw some.

OnePlus 3T in the hand

The body of the handset is designed with smooth, rounded shapes and some sharp well defined edges, it is both easy to handle and elegant. Instead of trying to rebel against the "slab" design that has been choking the smartphone industry for some time now, through often questionable gimmicks like detachable modules, OnePlus decide to embrace it a good while back. Since then, the OEM has only been working to refine it and the results show.

OnePlus 3T from the back

Just like the OnePlus 3, the only little beef we have with the "T" variant and we doubt it is universally shared is the camera bump. It sticks out quite a bit, which is a natural side-effect of having a 7.35mm body. Besides the subjective aesthetics of the phone, when left on a flat surface, the main concern with this is scratches to the camera lens.

OnePlus has managed to address this as well with the OnePlus 3T. Instead of simple glass, like on the OnePlus 3, the finish is now sapphire. This might be a small detail, but one that you will come to appreciate after using the handset regularly for a bit.

While we are on the topic, the back of the unit is very clean. It has the camera bump in question and a single LED flash below it. The only other thing there is the neatly engraved OnePlus logo and a couple of antenna lines, the top of which hides a secondary noise-canceling mic.

The front of the OnePlus 3T is also about as clean as it can be. When the display is off it blends in with the surrounding almost perfectly. Side-bezels around the 5.5-inch panel are so thin at just 0.755mm, that the picture appears to almost float above the base. So, the wow factor is still there despite the lack of a curved display.

Despite its clean front panel, the OnePlus 3T actually leaves quite a few controls at the user's disposal, but they are hidden away quite well. In the typical company fashion, users are offered a full range of navigation customization options, including the choice between on-screen controls and the capacitive touch buttons. The latter are practically invisible when not lit and otherwise show up as single white dots. They can also be rotated on a software level to match your preferred Back and Menu key placement.

As for the Home key, just like on the OnePlus 3 and the OnePlus 2 before it, it is not really a button. It is a fingerprint reader that also recognizes a tap gesture. Performance-wise, it can only be described as blazing fast. The input is also always-on and offers a nice little vibration feedback from the phone, to compensate for the lack of tactile feedback.

On the left side of the OnePlus 3T we find a standard volume rocker, with the same metal finish as the rest of the unit. Right above it, however, is a rather uncommon control that you don't see that often in the Android realm. It is the Alert Slider, which can quickly toggle between the three basic ring states - normal ringing mode, do not disturb and silent. The feature is also customizable and is something fans should already be familiar with. Although, previously, the button did control Notifications, rather than ringer.

Moving on to the right of the unit, we see the power button, done in exactly the same fashion as the volume rocker. We wish OnePlus would move it slightly in one or the other direction, so it is not directly opposing the volume rocker. But, that is nitpicking.

Then there is the SIM tray. The OnePlus 3T is a Dual-SIM device, so the tray actually takes two nano cards. Sadly, neither of the slots would take a microSD card and it is sad to see OnePlus skimping on expandable storage altogether. Throwing it in would have definitely added some value over the OnePlus 3. But then again, there is a new 128GB storage option on offer this time around.

To wrap our tour up, the top of the OnePlus 3T is absolutely empty, there is not even a secondary mic, which is on the back.

The bottom, on the other hand, is quite busy. Here we find the USB Type-C connector, which, sadly, only offers a USB 2.0 connection. We also have a single speaker grille, the main microphone and next to it, the 3.5mm jack.