Oppo is introducing the long-awaited true flagship tomorrow under the name Find X. The phone was teased several times by the company on Weibo, but the latest image gives us some information on the display. According to the post, the Find X will have a massive 93.8% screen to body ratio with practically non-existent top bezel. 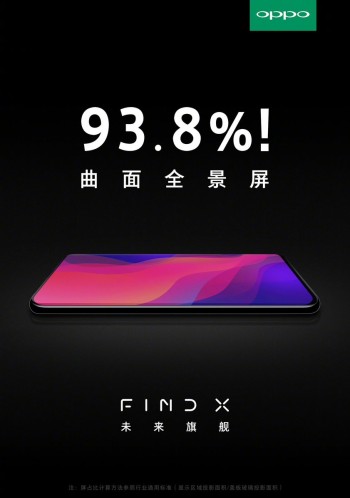 According to a video ad that appeared during the weekend on CCTV1, the phone will not have cameras on the front or back. Instead, the whole top side of the rim will rise and that’s where the dual camera setup, including the LED flash, will be hidden.

If the image is real and not some marketing trick, this will be the second impressive innovation in a week, just after vivo introduced the NEX phones with the selfie camera periscoping from the top.

Tomorrow’s launch is taking place in Paris and we are at the venue to cover the Oppo flagship and to give you our hands-on impressions right after the announcement.

OPPO has also announced the partnership with Lamborghini to bring us the OPPO Find X Lamborghini Edition which features a carbon fibre wrap design as well as the Super VOOC fast charging which is able fully charge the device in 35 minutes. The O...

Screen to body is meaningless if the phone is too big. Phone makers need to stop making these tablet sized monstrosities.