Most phones come in small boxes these days, but the Oppo R9s arrived in a well-stuffed packet. We appreciate the VOOC fast charger the most - it provides 5V @ 4A of current which amounts to a total of 20W of power. While other manufacturers won't even bundle a fast charger with their phones even when they support it so we are happy to see that. With this one, you should be able to top off the R9s battery in no time - and safely, at that.

Also in the box is a one-piece headset with a one-button remote. We got a transparent case too, though that may not be available in all markets.

The Oppo R9s measures 153 x 74.3 x 6.6mm and weighs 145g. This makes it significantly smaller in all dimensions than the iPhone 7 Plus, even though both phones have 5.5" screens and fingerprint-enabled Home buttons. The battery capacity wasn't hurt by the thin design and has a slight edge on the Apple phone.

As the R9s spins, try and see the antenna lines. Found them yet?

Oppo has used the same blueprint for several of its phones, including the R9 Plus that precedes the s-series. It's an all-metal body with a glass inset on the front, the corners and sides are rounded. Traditional stuff so far.

Where the Oppo R9s gets off the beaten path is the antenna lines - this is one of the first devices with a "six string" design. There are six grooves on the back - three near the top, three near the bottom. They are an attractive design element and they work just as well as the usual thick plastic antenna lines that most metal phones have (iPhones included). Samsung is working on a phone with a similar antenna setup (C9 Pro), but Oppo beat the Koreans to market by at least a month. 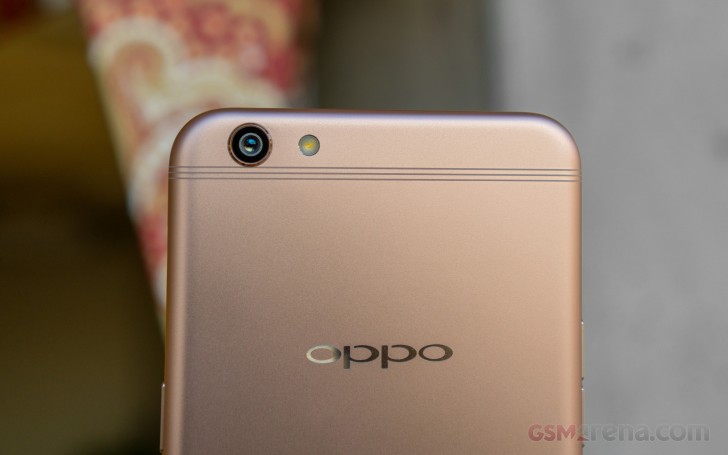 The phone is quite thin - it measures only 6.6mm thick - and weighs a shade under 150g. The R9s is also one of the narrower phones with a 5.5" screen, so it feels very compact.

The metal has a satin finish, soft to the touch and great at hiding fingerprints. It also just feels better than some of the more polished metal finishes we've seen recently, which can almost be confused for hard plastic. Only the rim around the glass on the front has been polished to a shine, giving the phone a bit of sparkle.

We give Oppo top marks for the construction of the R9s, for its compactness and for the antenna lines. But really the whole package came together perfectly. The maker didn't miss a beat - the battery capacity is good, the front glass is Gorilla Glass, all the standard ports are on board.

The front glass is 2.5D Gorilla Glass 5, the latest from Corning. "2.5D" has become an industry term to mean "slightly beveled." The metal around the glass curves inwards and there's a small lip, which provides a solid grip (rounded metal and rounded glass have poor friction).

The phone comes with a pre-applied screen protector. It's thin and you may not notice it at first but it's there to protect your screen from the first round of scratches - plus it's pre-applied so you don't need to bother installing one yourself.

Below the screen we find the fingerprint reader embedded in the home key. The home key is not a button that you can press, instead it recognizes your taps (OnePlus 3 style).

The Home key is flanked by another two touch keys - the App switcher and Back keys. They are dimly backlit. So much so that they can be hard to see on the white front (used for both the Gold and Rose Gold editions). Eventually muscle memory takes over and you don't even look at them, but it can be confusing at first if you're coming from a phone where these keys are reversed (i.e. Back on the left, App switcher on the right).

Above the screen is where half of Oppo R9s camera focus. The 16MP sensor is paired with an f/2.0 lens and can record 1080p video. This matches the specs of the F1 Plus, which Oppo dubbed the "selfie expert."

The camera protrudes from the back - just a small circle around the main lens, less than you might expect on a phone this thin. Next to it is a single-LED flash.

The microUSB 2.0 port (with VOOC fast charge support) is at the bottom of the phone, surrounded by a 3.5mm headphone jack and the loudspeaker grill. The mouthpiece is also here, the second microphone is lonely at the top of the phone.

The Volume and Power keys are on the left and right side of the Oppo R9s respectively. They are well-positioned and big enough, their press is solid.

Above the Power key is the tray slot, which accepts two nanoSIMs, the second of which can be swapped out for a microSD.

Normally, we knock a few points of phones without a dedicated SIM slot, but in the case of the R9s, you get 64GB out of the box and it's rare that people will need both more storage and a second active SIM.

The Oppo R9s suffers from a bland overall design - from a distance, it can be confused for any number of other smartphones (not just Android ones, if you know what we mean). However, the execution of the details is great. This is not a stand-out phone, just a very well made one and we think this will be enough for many.