After this preview was written, the phones were finally announced but as it turned out HTC was no longer to manufacture Qtek branded phones as we already wrote. As of 15th of June 2006 HTC was going to sell its handhelds under its own brand HTC. These two devices are the first additions to the new product line and they have new names - the PocketPC based on the Hermes platform that was formerly known to us as Qtek 9600 is now HTC TyTN and the Smartphone based on the HTC Breeze platform that was known as Qtek 8600 is now HTC MTeoR. Have this in mind when reading further down…

Qtek 9600 is a PocketPC with sliding hardware QWERTY keyboard and a 2 megapixel camera. It comes to replace the Qtek 9100 (HTC Wizard), while Qtek 8600 is a Smartphone and has no clear predecessor.

This is not a complete review; it's more like a preview. While fully functional, the two devices we've got are still in development stage, they are test units and are not branded yet. The final products will have improved software and might even have some hardware changes - for example Qtek 8600 might lose its front video call camera.

Qtek 9600 is based on the HTC Hermes platform. The other devices based on that platform will be JasJam, O2 XDA Trion, T-Mobile MDA Vario II and Orange MPV 3100. At the time of writing this preview O2 Trion was the only announced device. 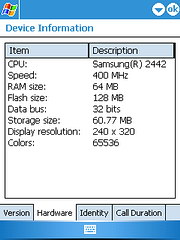 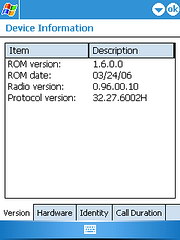 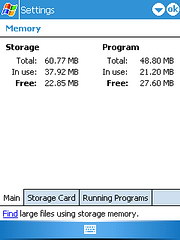 The testing unit we've got didn't felt exactly solid due to the playing sliding system. The device though bears some marks of heavy (mis)usage and this might explain the bad shape of the slider. The locking mechanism was obviously out of shape since when using the camera in horizontal mode it always tended to slide out.

The main 4-way navigation button and the other 7 controls are located in the bottom front part of the device. The three new buttons are - the Windows logo button which opens the Start menu, The OK button, which basically minimizes the running applications and the Video call button. The email and Internet buttons are located in the top front side; next to them is the video call camera.

On the left side of Qtek 9600 you can see the scroll wheel, which can be pressed like the Jog dial first used by Sony in some of its models and later on appearing on Sony Ericsson UIQ devices. Next to it there is one more OK button and the Voice button, which has dual usage - when pressed briefly it opens the Voice controls application and when held down it opens the Voice record application. Near the bottom of the device you can see the microSD card slot. Obviously HTC is moving towards this standard since they are using it even in a device this big. The first HTC to use microSD was STRTrK (Qtek 8500, i-mate Smartflip).

The top of the device has no controls on it. The bottom however features the infrared port, the battery cover lock, the small hole for the soft reset, the microphone aperture and the USB port (used also for charging). The stylus is hidden near the right bottom edge of the device, quite inconvenient location actually, since the top right edge is usually the best place. The stylus is telescopic and round, our opinion is that the flat styluses are better.

The right side holds the camera shutter Comm Manager button and the ON/OFF switch. The ON/OFF has dual function - pressing it briefly just puts the device in a powersave mode and it remains perfectly functional. An incoming call, message or alarm can wake the PocketPC back on. So, in the everyday usage, the ON/OFF switch is one of the most used buttons and it's a good thing to see it on one of the most convenient locations.

In the same time, if you press the button significantly longer, it will switch off the device completely - of course, after warning you in advance.

Now it's time to slide out that QWERTY keyboard. It looks convenient and it really is. You will need just minutes to get used to it and you will be able to type fast with your thumbs.

The back cover is easily opened using the lock in the bottom. Once removed it reveals the Li-Poly battery with increased capacity - 1350 mAh - this is definitely good news. O2 claimed 300 hours of stand-by when they released the Trion (the only officially announced HTC Hermes device) and this is 100 hours more than the devices based on the previous HTC Wizard platform could reach.

Under the back cover

The backlighting of the QWERTY keyboard is strong; you will be able to use it in complete darkness without a problem. Most of the control keys however don't have backlighting, the only exception are the red and green receiver keys.

In this preview we will not explore the functionally of Qtek 9600 and there is no need. It runs on Windows Mobile 5.0 for PocketPC and this way it won't differ much from Qtek 9100 for example. For details, you can check the complete Qtek 9100 review here.

The Qtek 9600 has a 2 megapixel camera. When we first looked at the specs we thought it will be the same camera as in Qtek S200, but this is not the case - the camera in 9600 has no autofocus. It is a regular fixed-focus camera with macro switch. There are several modes of shooting including Panorama and Burst mode. The exposure compensation and the white balance can be adjusted manually. The highest resolution is 1600x1200 pixels with 4 quality levels.

The photo application starts when the shutter button is pressed. The pictures are taken in landscape mode and the whole display serves as a viewfinder. Because of the many buttons all over the device and the sliding construction, the shooting is somewhat tricky. The shutter button is way too small and hard to press and when trying to shoot we either managed to slide the keyboard or close the photo application with the OK button on the opposite side of the phone. Because the shutter is located almost on the right end, shooting with one hand is almost impossible - you will risk at any time to drop the expensive device.

There is a also a significant shutter lag - the actual pictures is taken 2-3 seconds after the viewfinder gets black, it's impossible to use the camera for action photos. This should be an early firmware issue but in the current state you have to be very still after pressing the shutter or else you risk ending with a photo of your shoes - a result we got far too often.

The macro mode is a good thing to have, but it is a really a hit and miss. As with the Nokia N80 the macro mode has a sweet spot, about 15 cm from the lens and only the objects at this distance came sharp. The viewfinder doesn't help much in determining what is in focus and what not. The best way is to shoot several photos changing the distance from the object and later keep the one in focus. For the roses in the samples we've made about 25 photos and less than one third were usable.

It's too early to judge the quality of the pictures, but anyway we decided to make the usual set of photos for the new model. The first impressions are that the colors are pleasant, slightly on the vivid side. At this stage we see noise reduction and strong oversharpening. Look at the clouds in the first picture, due to the contour introduced by the sharpening algorithm they look more like an illustration. Even in the downsampled pictures (the second set) there is still a trace from the oversharpening. We hope the developers will significantly decrease the amount of sharpening in the final version of the firmware.

Photos from Qtek 9600 in full resolution

Of course, the camera in Qtek 9600 can also capture video. At it highest settings it records in MP4 format with resolution of 320 x 240 pixels.

no# phone,every thing in this small toy.