Qtek 8600 is based on the HTC Breeze platform and is a smartphone featuring 3G connectivity, IrDA, Bluetooth, 1.3 megapixel camera, a large 2.2" display with QVGA (320x240 pixels) resolution, and a microSD card slot - all that encased in a metallic body. The smartphone is powered by a Samsung 2442 processor running at 300 MHz - this should be a significant improvement over the 195 MHz TI OMAP processor used in the previous Windows smartphone models.

Qtek 8600 can't be considered a successor of Qtek 8310, because it doesn't have Wi-Fi connectivity. 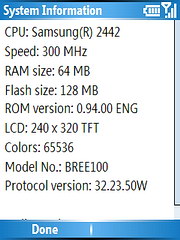 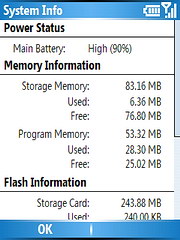 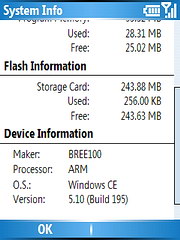 The Qtek 8600 feels rather nice to touch and it's among the slimmest smartphones available. The construction is pretty solid and it conveys a promise of solid functionality too. We won't discuss that since as we already mentioned we are only writing a preview here - a peek on things to come. The device is a test version and is still unbranded, so it may undergo many changes. One of the rumored ones is that it would lose its front video call camera.

Now, the right side of the phone features the Voice and Camera buttons. An interesting option is that you can use the front video call camera for taking regular self-portrait photos. The only downside to that of course is the poor VGA resolution.

The left side of the body houses something, which looks like a jog dial, but actually is a dual button, which allows moving through the active options upwards and downwards and cannot be pressed. Since its functionality is always doubled by the up and down directions of the joystick, it will probably be handy only when adjusting the volume of an ongoing call. We also find the microSD card slot on that side of the phone.

The top part of the phone incorporates only the tiny ON/OFF key which besides its obvious purpose, when pressed briefly opened a useful menu allowing you to access the Comm Manager, lock the keypad or change the current ringing profile. The bottom part of the phone accommodates only the USB port which is used also for charging.

On the upper back side of the phone we find the 1.3 megapixel camera, the loudspeaker and the external antenna jack. Below the back cover we found a 1190 mAh Li-Poly battery which is promising. No official information is yet available, but we expect good numbers for the stand-by time. SIM card bed has a strange extracting solution which involved pulling the SIM card out of the dedicated slot with the help of a plastic strip.

We found the keypad very easy to type with. The keys are well spaced, well elaborated and have a very positive response. Navigation is performed through a 4 way joystick which is our team's preferred navigation option. Besides the obvious numeric part, the both sides of the joystick also house a red and green receiver keys along with Home and Back keys. The keyboard features four more keys which are positioned above the joystick. The outer left and right keys are context keys which are assigned different functions by the phone's interface. The middle two are fixed shortcut keys for Internet Explorer and the video call. The only issue with the usability of the keypad is that the two context soft keys are rather tiny and are embedded deeper than the red and the green receiver keys which sometimes make you press accidentally the latter instead the context keys themselves.

The keypad backlighting is blue and is rather weak, especially for the middle row. There is no backlighting for the navigation joystick.

Display in the dark

Now surprisingly, the camera of the Qtek 8600 is a lot quicker than the one of 9600 and doesn't suffer that lag which rendered half of the pictures we took unusable. The performance of the camera application is very good, maybe because it's mainly text menu based, there are not graphic representation as in Qtek 9600.

The quality of the photos is nothing to write home about. The dynamic range is very limited and the noise is high even in the well lit scenes. This of course can only get better in the final firmware version.