A handful of people probably remember this, but Oppo came up with the triangular-patterned design back in 2015 on the R1x. But it was a once and done deal, that is until last year Realme brought this sweet geometric pattern back for the Realme 1 and apparently it intends to keep it alive with the Realme 5 series. 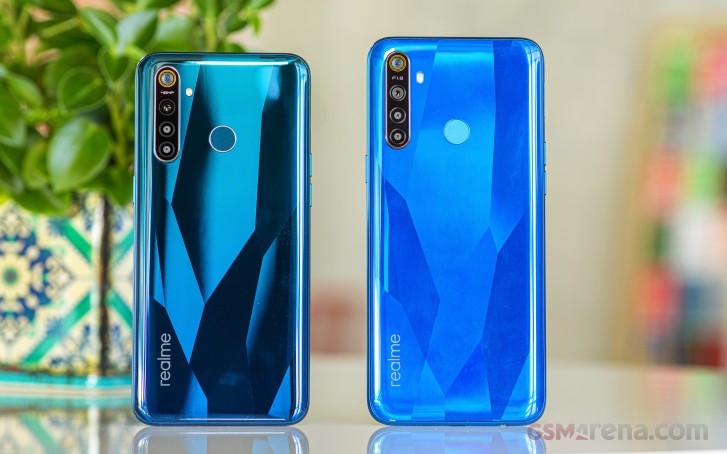 Indeed, the Realme 5 Pro, no matter the base color, has captivating looks and we lost a few moments just staring at it. Light reflects differently through the different shapes on the back and the color changes towards darker or lighter depending on the viewing angle. It's nothing over the top, but enough to win more than a few looks of approval. 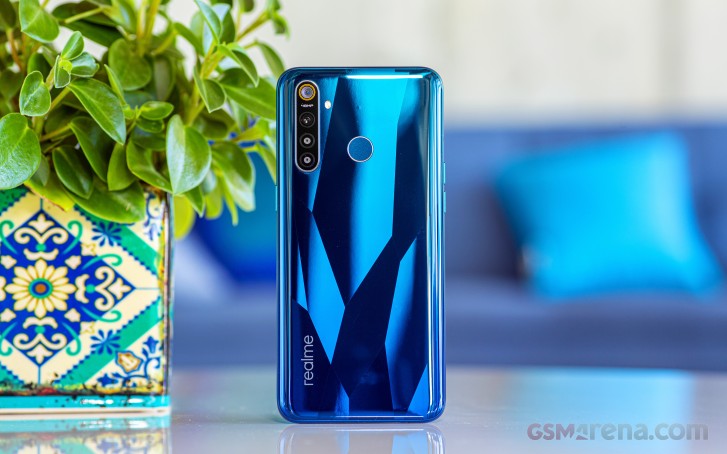 We can't confirm the material used for making this stunning rear panel. Maybe it's glass, maybe (and probably) it's plastic. But the feeling we got while handling the Realme 5 Pro was definitely glass-like, meaning the back did not feel cheap at all.

The Realme 5 Pro may have mesmerizing looks, but its design is as trivial as it gets today - the front is all-screen protected by a Gorilla Glass 3, and the back is all a piece of art with a multi-camera setup. The frame that combines those two together is done in the same base color as the back but with a matte finish. It is rather thin and this you can definitely tell that this one is made of plastic. 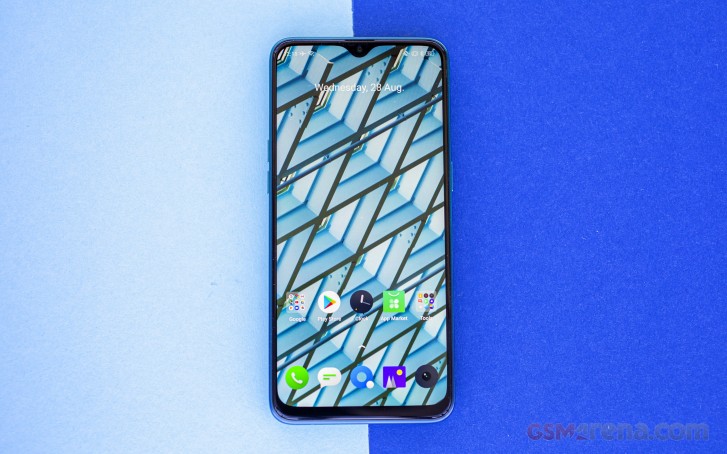 So, the large 6.3" IPS LCD screen at the front is your doorway to the Android world and beyond on the Realme 5 Pro. The panel has a droplet-like cutout for the 16MP selfie snapper. Hidden within the notch are also the ambient light and proximity sensors.

Realme claims it has managed to reduce the size of the notch by 30% since the Realme 3 Pro, but we really can't see the difference.

The earpiece grille is just above the notch, etched within the screen's enclosure, but it's so thin that it's almost invisible. 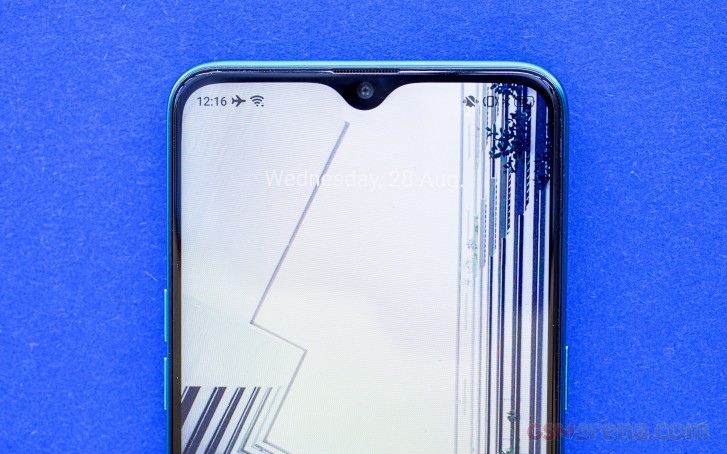 There is no notification LED on the Realme 5 Pro.

There is a lot going on around the sides of the Realme 5 Pro, though most of the necessities are placed at the bottom of the phone - the USB-C port, the 3.5mm jack, and the loudspeaker grille.

There is a triple-card slot on the left for accommodating two nano-SIMs and one microSD card slot - no need to swap anything. The volume buttons are on also on the left side and while that's a bit odd, it's not uncommon. Finally, the power key is on the right side.

The back of the Realme 5 Pro is indeed interesting. Once you are done looking at those nice pointy shapes, you are bound to notice the quad-camera setup that's humping quite a bit. Starting top to bottom the first camera is the 8MP ultrawide shooter followed by the 48MP primary, then comes the 2MP depth sensor and the last one is the 2MP macro camera. 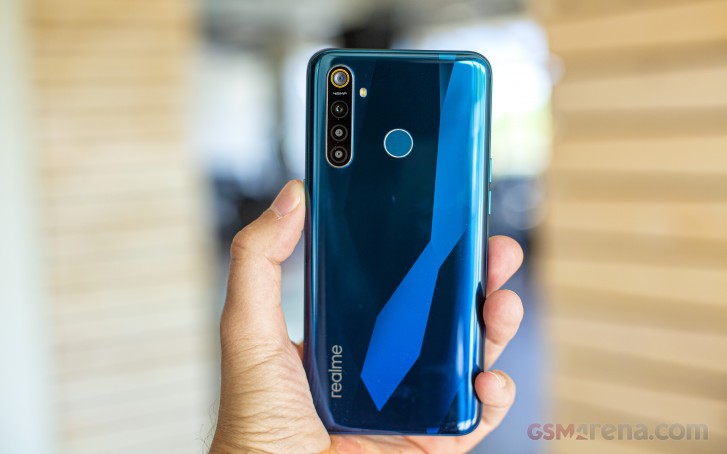 Realme didn't think the camera decorations through - the yellow halos around the first snapper and the 48MP inscription suggests that the primary camera comes first when it is actually the second. But let's not be that picky, we guess.

All four cameras share the same bump and because of it, the Realme 5 Pro will wobble when rested on a desk or a table. This is the price you pay when the makers try to fit so many snappers in such a slim body.

Also on the back is the fingerprint reader. It's a very traditional placement and the sensor is always-on, as usual, accurate and plenty fast.

Here is something we didn't expect to see soon on a Realme specs sheet - the series 5 phones are splash resistant. How about that?!

The maker has sealed all gaps between the frame and the panels, the ports, the speaker and the earpiece, the SIM tray, and even the keys. It used a combination of glue, rubber gasket and rings to secure everything. And this is all very welcome, especially for a smartphone that cheap! 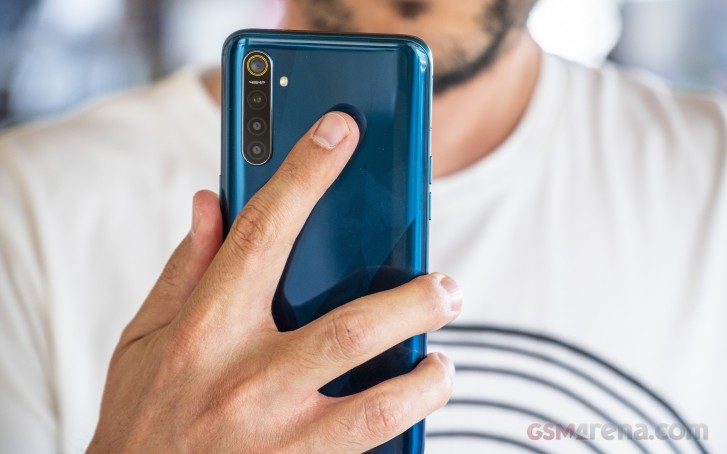 Price is probably why Realme didn't go for the IP68 certification. This might have led to a hike in the retail price. Or maybe Realme isn't that confident it will pass the IP68 or similar. That's why we suggest not to enter the pool with your Realme 5 Pro, but you can be sure the phone will survive any accidental spills, drops in sweet water, or a just rainy day. So, while you won't go swimming with the Realme 5 Pro, you can at least have greater peace of mind.

Because of the thin frame and the sloping edges of the rear panel, the Realme 5 Pro is a tough one to hold and handle, especially when snapping pictures. That's why we strongly recommend using the provided soft case.

Smudges do stick on both ends of the Realme 5 Pro, but they are mostly unnoticeable on the back. The screen would require regular cleaning though, mostly when those reflect the bright sunlight on any good day.