The Realme 5s borrows the same 6.5-inch tall IPS LCD panel with an HD+ (720 x 1600px) resolution with a modest pixel density of just 269ppi. So if you look closely enough, you might notice some sharp edges around round icons, for example, but this is not the proper way to use a phone anyway. In short - it's still sufficient. And it's good enough for reading too without being too hard on your eyes. Now off to the tests. 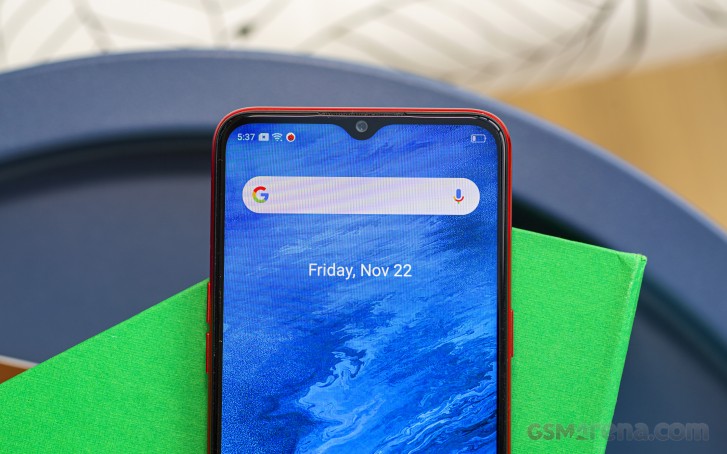 As one would expect, the display performed quite similarly to the one on the Realme 5. Brightness wise, it goes up to 487 cd/m2, which is just enough for fairly comfortable outdoor use even in bright conditions.

When it comes to color accuracy, Realme 5s is not that great but few people would mind at this pricepoint. The average dE2000 is about 6.5, with the usual suspects like white and gray being a bit too blue-ish. You can adjust the color temperature in the display settings menu if you want, but that won't shift the average dE2000 all too much.

Thanks to the humongous 5,000 mAh cell inside, the handset aced all of our tests - on-screen and off-screen ones. The endurance rating matches the one we got from the previous generation - 144 hours, which is mighty impressive. After all, the big battery doesn't even break a sweat with the rather efficient Snapdragon 665 SoC and the not-so-power-hungry IPS display. 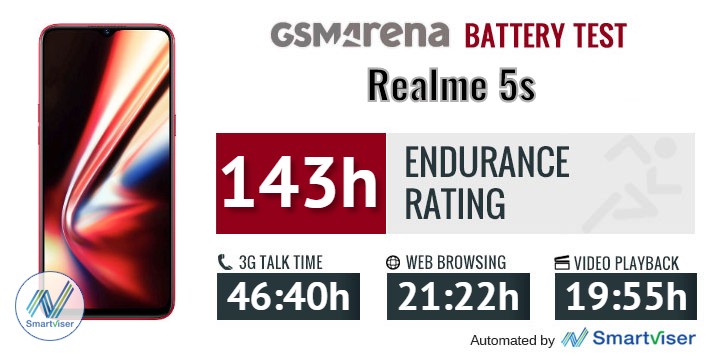 Fast charging is out of the question because the provided charger caps the smartphone's capability to draw juice at 10W - 5V/2A. In our 30-minute charging test, the handset did 21% from flat - not very flattering, but it's about right considering the price range.

The Realme 5s comes equipped with a bottom-firing loudspeaker that can get loud pretty loud - enough for you to hear it in a crowded and noisy place. And upon subjective hearing, you can still hear the strong emphasis on the vocals, whereas the background music and beat fade out a little. There's lack of depth in a way, but this is a smartphone loudspeaker we are talking about here so let's not get too picky.

When it comes to the output through its audio jack, the Realme 5s was identical to the Realme 5 before it. It did impressively with an external amplifier, delivering an output of perfect accuracy and very high loudness.

In stark contrast, headphones caused the stereo separation to decrease significantly, while our equipment also detected some intermodulation distortion. Volume dropped to average too, rounding up a rather unimpressive showing in this second part of our test.