Fresh off the Realme 5 and 5 Pro announcement, the brand is gearing to introduce a new line of phones. At the end of the Realme 5 series event, Realme India CEO Madhav Sheth teased a phone called the Realme XT which will feature a 64MP main camera and is expected to come in early October.

Now, a new post by Realme CMO Xu Qi Chase on Weibo teased a new line of Realme phones which will be announced next week. Chase posted a picture of a Velociraptor and hinted that the new device will offer improved performance and will take better photos. 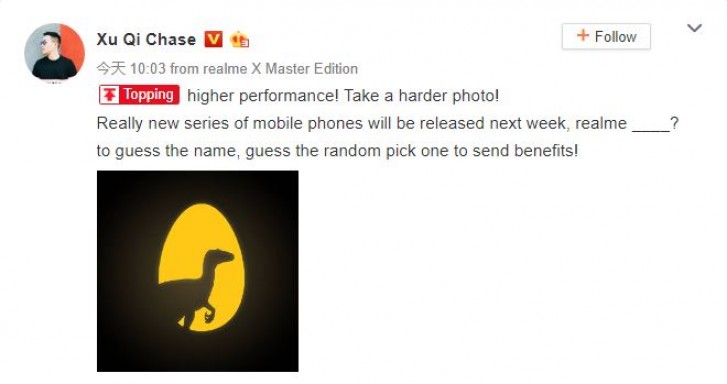 Given the popularity of gaming phones lately, this new line of phones could be a gateway for Realme to that segment. We could see MediaTek's recently announced Helio G90 and G90T chipsets on the upcoming devices but that's just speculation at this point.

A much less exciting (but probably more likely) development would be the debut of the 5 series to the Chinese market. Well have to wait for more clues in the days leading up to next weeks announcement to know for sure.

Well since xiaomi used the last mediatek gaming chip in Note 8 series this will going to be same.

realme 64MP camera vs Samsung note10 12MP camera ? still Samsung wins the game. because this is not about the number of Megapixels but its all about the quality and Samsung owns the quality that never been beaten. Samsung can create photo which is...