The Realme V15 is arriving tomorrow and previously we heard it will feature 50W fast charging. However the company's VP Xu Qi Chase today confirmed the smartphone will charge at up to 65W instead. 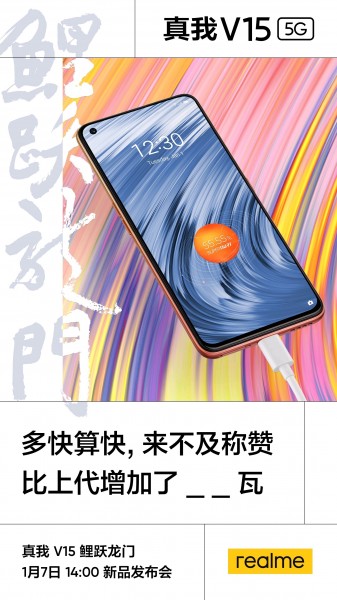 Realme hasn't detailed the specs of the V15 yet, but a few pictures of the smartphone shared by the company confirmed the V15 will pack a punch hole display and feature a 64MP triple camera on the back.

The V15 will weigh less than 200 grams and likely feature an in-display fingerprint scanner. The smartphone will support 5G networks and is rumored to have the Dimensity 800U chipset at the helm.

The Realme V15 will be unveiled tomorrow in China at 2PM local time, so there's not much more waiting to be done before we get all of the details.

Realme is slowly learning to make lightweight phones instead of churning out heavy bricks every months. I wonder when Xiaomi will learn this.

Hey realme, when are you gonna fix your new C12. The phone is unusable.

Never will buy a realme again and definitely not a phone with a mediatek chip.