The notch is not a new thing for Realme, but it may be a bit disappointing for those looking to get the Realme X full display matched to the best camera the company has put on a smartphone. Apparently, you can't have both just yet. 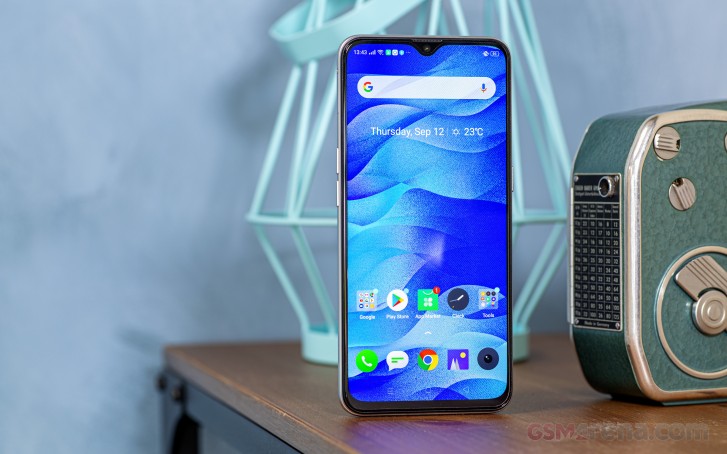 The screen uses a familiar Diamond PenTile matrix and has a resolution of 2,340 x 1,080 pixels. That adds up to a 19.5:9 aspect and the excellent for the class 402ppi density.

Realme promises a maximum brightness of 430 nits but the screen exceeded the maker's specs as we measured 447 nits at the far-right end of the brightest scrubber.

There is no Auto brightness boost under direct sunlight, but the screen does well even in the brightest of days thanks to the good brightness and low reflectivity.

We also measured the minimum brightness - it's just 2.2 nits, so you'll have no trouble using the phone in complete darkness.

The color reproduction is decent out of the box with lively though not super accurate colors. We measured an average deltaE of 4.9 against DCI-P3 color space and a maximum deviation of 8.8 at point White. Indeed, the white and gray hues visibly shifted towards blue in the default display setting.

There is a Color Temperature Adjustment slider in Display Settings that is set to the 'Default' middle position with 'Cooler' and 'Warmer' at the extremes. Setting this slider to the warmest option yields slightly better results - average deltaE of 4.1 and a reduced but still present bluish tint.

The Realme XT has a beefy 4,000mAh battery - pretty much the same capacity as the Realme 5 Pro's and slightly larger than Realme X's. The XT supports VOOC 3.0 fast charging and its box contains both the 20W charger and the proprietary USB-C cable needed for VOOC to work. This pair refills about 50% of the Realme XT's depleted battery in 30 mins, while a full charge takes 80 to 90 mins.

The Realme XT aced our battery lite test - it clocked north of 16 hours of video playback and 13 hours of browsing the web over Wi-Fi. We also measured more than a day of 3G voice calls. And adding the efficient standby performance we got an excellent overall Endurance rating of 100 hours.

When compared to the Realme X, the XT did a tiny bit better in both screen-on tests though it showed a major improvement in standby performance. 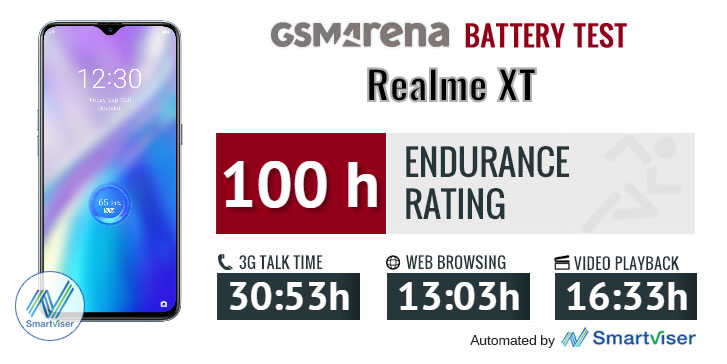 Our battery tests were automated thanks to SmartViser, using its viSerDevice app. The endurance rating above denotes how long a single battery charge will last you if you use the Realme XT for an hour each of telephony, web browsing, and video playback daily. We've established this usage pattern so that our battery results are comparable across devices in the most common day-to-day tasks. The battery testing procedure is described in detail in case you're interested in the nitty-gritty. You can check out our complete battery test table, where you can see how all of the smartphones we've tested will compare under your own typical use.

The Realme XT has a single bottom-firing speaker. It scored an Excellent mark in our loudness test, though unpleasant high-pitched tones are common and probably responsible for the really loud Ringing Phone tone and hence the Excellent mark. In fact, when playing music from YouTube, the speaker sounds (subjectively) quieter than suggested by the score. 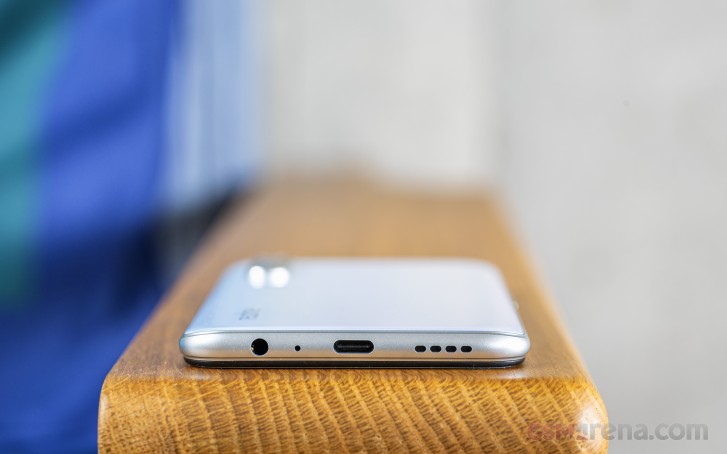 Indeed, Realme has always tuned its speakers for mid-tones and the XT seems no different - when playing music you'll hear the vocals crystal clear, but the music itself will be a little bit on the quieter side.

The Realme XT’s performance with an external amplifier was exemplary, delivering perfect scores top to bottom and at very high loudness too.

Headphones took their toll on stereo separation and added some intermodulation distortion, plus they dropped the volume to only average. The performance is more or less in line with the Realme 5 Pro and decent for the price range, but hardly spectacular overall.