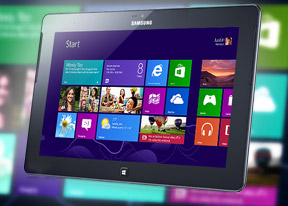 Another trick up Windows RT's sleeve is the Office 2013 Home & Student edition. It includes Microsoft Word, Excel, PowerPoint and OneNote.

To optimize the experience on Windows RT, Microsoft has removed some features from the Office 2013 RT. For example, you cannot add third-party add-ins or use macros. Support for Visual Basic Applications is also disabled.

Every app of the Office 2013 RT suite offers a lot of templates to start a project. Whether you want to create an annual report in Excel, complex PowerPoint presentation for a meeting or just write a simple school report in Word, you've got a wide choice of templates to begin with.

Office 2013 RT has an option to optimize the user interface for touch input. It's enabled via a dedicated button with a blue icon. Upon pressing it, buttons get more padding around them. It's a minor change that marginally improves the user experience on slates.

Overall, Windows 8 tablets look quite an attractive option - as bold a statement this may be on a market pretty much owned by Apple and swarmed by Android. Price permitting, of course.

The interface is impressive with cool gestures and neat little tricks, it's consistent, friendly and good-looking. The Ativ Tab we tested hasn't got the most powerful hardware but that didn't take away from what we found to be a compelling experience.

So, no the Ativ Tab is obviously not in the same league as the New iPad and the Galaxy Note 10.1 but hopefully that will be reflected in the price tag. There's the issue with apps as well. Microsoft's app market is hopelessly behind Apple's and Google's but Redmond finally has the consistent cross-device ecosystem that will be increasingly hard for developers to overlook.

Having caught a glimpse of an early test unit, We're yet to see if the Samsung Ativ Tab's bite will be as good as its bark. But it's been a pleasure and we're looking forward to our next encounter with Windows RT on handheld - we won't say no to smartphones or Pro tablets either.