Croix interface gets the vibes

We've already reviewed the Samsung award-winning Croix user interface in our Samsung Armani phone review (the Samsung F700 was first to come with it). The Armani phone however proved way underpowered for the rich graphical experience the user interface is trying to deliver with real time transitions and animations. The Samsung F700 has hardware as capable as the one of F490 and it offers seamless execution of every possible task.

The Samsung F490 however has received some software upgrades and thus combines the best of the F700 and the Armani phone.

Every touch on the display is accompanied by a slight vibration - just so you know that your command has been accepted. That's a feature we would love to have on the iPhone. The level of the vibrating feedback is adjustable within a scale of 1 to 5.

On the main standby screen there are three functional areas - a clock/calendar bar at the bottom, a crosshairs in the center and a shortcut bar on the top.

A finger sweep on the Calendar bar at the bottom changes the view to the current time only. If you have setup the world clock, it will show two time zones simultaneously. When the music player is running, the currently playing track is shown on this bar, along with the album art if there is one.

The whole Calendar/Clock band toggles on and off if you click on the lowest clock bar at the bottom.

Again, unlike the Armani phone, a tap on the crosshairs in the middle of the screen opens the main menu, otherwise accessible through its touch-sensitive key below the display.

The wallpaper of the F490 can change as the user wishes - that's a normal feature of any modern phone. However the F490 offers it with a twist. If you wish, you can set the handset to rotate several of your favorite wallpapers at an interval you define. You even have the say on things like the transition effect used and the order the images will be displayed.

The top shortcut bar in standby mode features three shortcuts. The first one activates the Silent mode after a touch-and-hold, the second one opens the phonebook and, finally, the third launches the Phone dialer.

We complained about the Armani phone specially styled icons that were hard as hell to recognize unless you activate them. The icons used by the F490 are far more understandable and intuitively designed.

The main menu displays as a 4 x 3 grid of icons. There are no alternative color versions. Sub-menus are shown as lists. Funny enough, all sub-menus have a numerical shortcut, which of course cannot be used in the case of the F490 - an obvious legacy of the F700, which has a hardware QWERTY keyboard.

Here is a short video walkthrough of the user interface:

Scrolling within the listed menus is intuitive enough, as all it takes is several finger swipes. However it's nowhere near the iPhone handling. Furthermore, the tall body of the F490 might turn out to be a scrolling nightmare for users with shorter thumbs (read: most women).

The special cross-like shortcuts menu is still available, just like on the Armani phone and the F700, but it has received its own shortcut key on the right hand side of the handset. From this menu you can open the music player, phone dialer, message editor and web browser. Touching the center opens the main menu.

To dial a number, you need to use the fullscreen Phone dialer. Unlike some of the other Samsung handsets we've reviewed recently, the Samsung F490 doesn't suggest contacts, whose numbers contain the digits you have typed. The phonebook of Samsung F490 offers space for 1000 entries. The row on the bottom of the contact list gives you access to frequently used features. To search the phonebook you need to tap on the search field, which opens the alphanumeric keypad and then type the first letters of a contact's name. 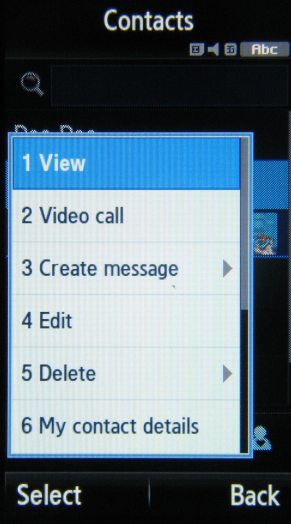 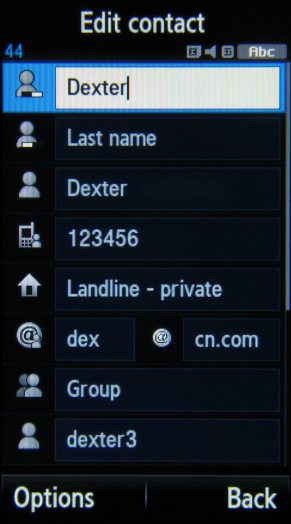 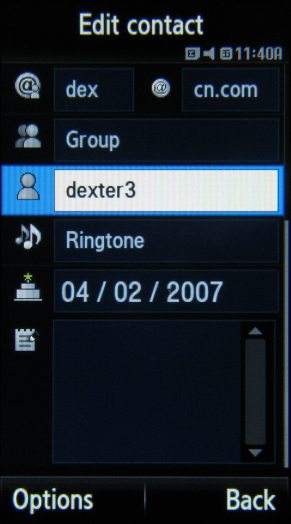 From the Options menu you get access to editing the contacts. A total of 10 fields are available for each entry. Furthermore, you can repeat each field more than once, which allows you to add up to 5 numbers per contact.

The Calls Log gives you control over your recent calls. It has four tabs, Recent contacts the default one. Each type of call gets a separate tab too, plus there is also a message and a wireless data counter.

As far as call management is concerned, you can blacklist certain numbers and thus reject all their calls and messages. There is also a data counter for keeping track of your wireless data traffic. 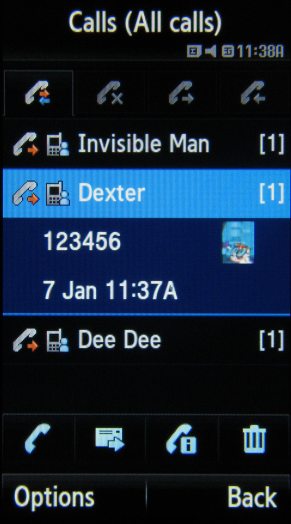 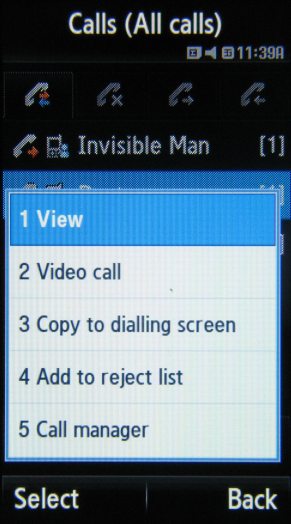 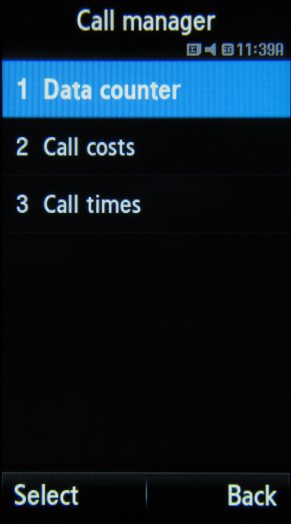 Half of the making calls game is actually hearing them when they come in. Here is how the Samsung F490 ranks along some of the other handsets we've measured in our speakerphone loudness test. It surely doesn't have the loudest voice around but there aren't many occasions you will miss a call with the F490. You can find more info about the test itself, as well as results from other tested devices here.

With the Samsung F490 entering data comes natural - a single tap on the field highlights it, then a second one invokes the on-screen keypad. As you might have guessed, a rich T9 dictionary is also present here to help with text input. The Samsung F490 handles all four popular types of messages: SMS, EMS, MMS, and email. A single editor is used for creating the first three, while emails have their own. Messages are converted from SMS to EMS or MMS by simply applying font colors or formatting, or by inserting an image. 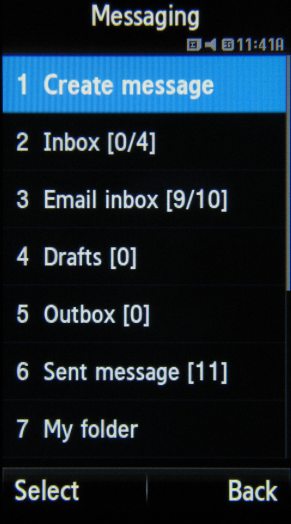 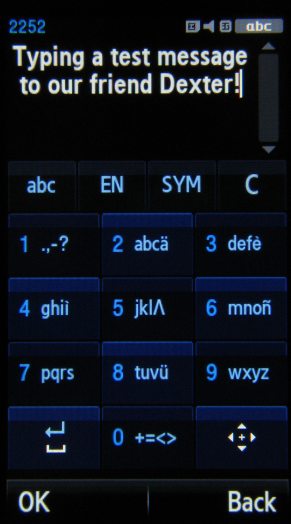 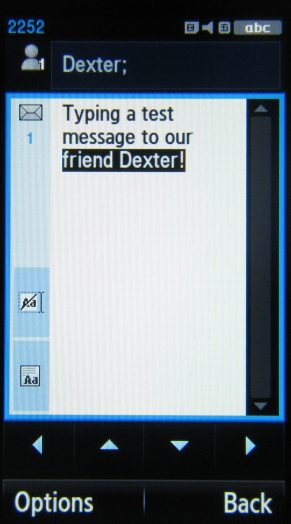 A security enhancement in Samsung F490 is the Mobile Tracker (previously known as uTrack). Its purpose is to send tracking messages to pre-defined numbers in case your phone gets stolen and a SIM card other than yours is inserted. The effectiveness of this particular feature is the subject of a longer discussion, which we would rather not go into at this stage. Suffice to say, having it won't hurt at least.