The file browser in Samsung F490 is pretty much the same as in most Samsung feature phones. The F490 offers 128 MB of built-in memory available to the user, which is shared among user files, MMS and emails.

There are different tabs for the phone memory and the memory card but they have similar folder structures.

There are folders for most different file types - images, video, sounds, allowing the handset to sort the memory contents. Unlike the Armani phone, here you can drag-and-drop files to move around folders.

A flaw we have found in several recent Samsung handsets is luckily not present in the Samsung F490 - the unusually slow card reading. This time Samsung have got it right.

Browsing the files • opening an image

The Samsung F490 picture gallery is part of the file manager and not a separate application. Accessing it is as simple as opening the Images folder. Once you open an image, the rest of the images in the folder appear on a semi-transparent bar on top. You can scroll them back and forth until you find the image that you need. A simple tap will then display it fullscreen. In fact, that way it looks much like the LG Viewty gallery, but improved.

The image gallery supports landscape orientation too. Zooming on the images is available. However it is way too slow and might get on your nerves, like it did with us.

Here is a short video walkthrough of the image gallery functionality:

The F490 also has an image editor onboard with all the basic editing options - auto levels, brightness, contrast, color. You can even add text and clipart to your images. Unfortunately, the rich functionality seen in the Scalado image editor used in the Samsung Armani handset is not present here. 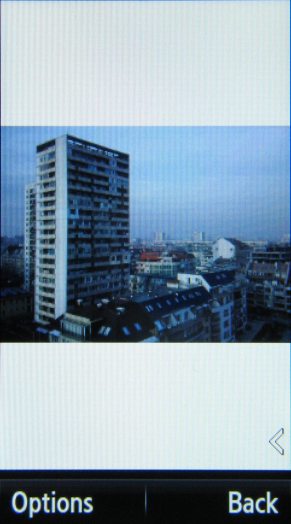 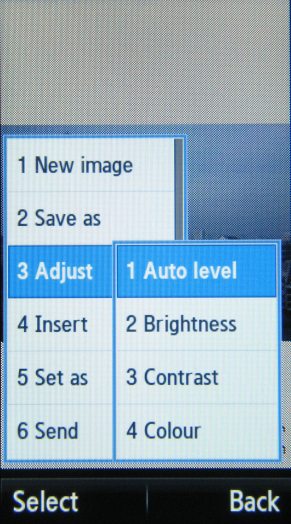 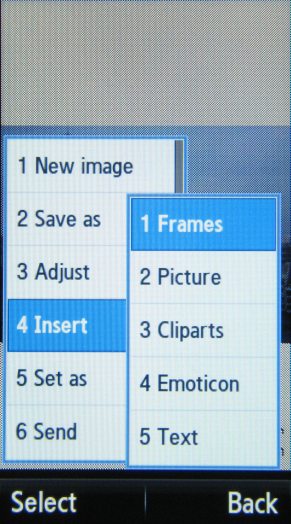 The music player is the best of the Samsung crop and allows filtering by multiple criteria. The music player controls are so intuitive that it seems it's the place where the whole cross-thing originated - the cross-like pattern is the very essence of music control with Samsung F490.

The horizontal axis on the music player screen displays the current track running time. Thus moving the cross with your finger can skip portions of the track. A longer horizontal sweep skips to the next track in the playlist or album - a feature that was absent in F700. You can move the cross along the vertical axis too. That changes the current volume level.

Additional options allow you to easily change repeat and shuffle settings, the current equalizer preset (there are several of them) and also give tracks a rating, to later use for creating favorite playlists. Album art is also available, along with a convenient way of browsing your current playlist and changing albums on the fly.

When minimized to play in the background, the music player displays the current track on the standby screen, along with the album art, if any. And you can change tracks straight from the standby screen by a mere finger sweep on the info bar.

Here is a short video walkthrough of the music player functionality:

Generally the audio quality of Samsung F490 is below the usually high Samsung standards. Samsung take first place when it comes to audio quality of their feature phones. As you can see in the table below, the intermodulation distortion is rather high when compared to the Samsung U600 for example.

The Samsung F490 is still good at that and is almost identical to what the LG Viewty can put up. You will probably like to know that the sweet spot for getting the most out of it is two steps under the maximum volume level.

You can find more info about our audio quality test here. 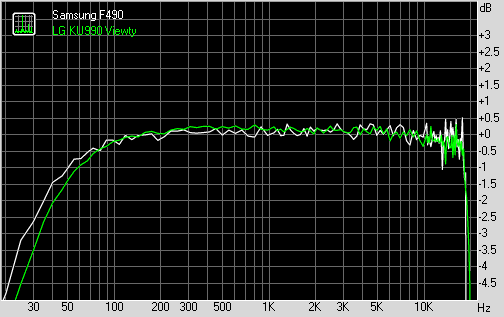 Playing widescreen video was a disappointment

The video player on Samsung F490 has similar interface to that of the music player. It doesn't have many features but all the essentials are covered - it can play video files in fullscreen landscape mode and you can fast-forward and rewind videos. You can also jump to a specific scene in the video clip.

According to the official specifications, the video player should have been able to play WMV/MPEG4/H.263/H.264 encoded video files with a maximum resolution of VGA and a maximum framerate of 30 fps.

We were excited to test the video capabilities of the Samsung F490 given the wonderful 3.2-inch 16:9 TFT display. However we couldn't get the video player to play a WMV file no matter how low encoding settings we used. The same went true for the H.263 encoding option.

Truth be told, it did managed to play a VGA@30fps taken by the Nokia N95 8GB's camera. However a VGA movie doesn't have the 16:9 widescreen aspect ratio that we were so excited about.

As you would have guessed, the video player is not capable of playing XviD or DivX-encoded videos. This is a big point for the LG Viewty, which offers DivX playback.

The video playback was a letdown