The Samsung Galaxy A01 Core was first seen late last month in the Google Play Console and in Bluetooth SIG certification documents. We then caught a glimpse of some official-looking renders. We're now learning it has also been approved by the NBTC, Thailand's telecom regulator. 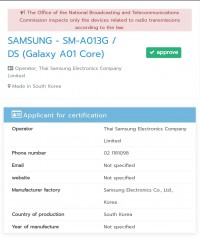 Samsung Galaxy A01 Core at the NBTC

As usual, the NBTC database entry doesn't reveal much about the specifications of the phone other than the fact that it's a dual SIM device - as evidenced by the 'DS' in the model name, same as in the Bluetooth listing.

From the previous reports we know that it will be built around a 5.1-inch 720p display and will be powered by an old Mediatek MT6739WW chipset with a quad-core CPU. How it will get the certified Bluetooth 5.0 capabiliy with that chip that technically supports 4.1 is beyond us - likely a mistake in one of the conflicting documents. The speculated specs include a single gig of RAM and Android 10 OS.

It's unclear when the Galaxy A01 Core will become official, but with certification proceedings underway here and there, its release date must be approaching.

Because it's pointless to have high performing hardware connected to a 4-5 inch screen. Overkill for browsing and you can't see what's going on if you're gaming. The solution is the Z Flip. The smallest phone I've owned ...

This is a rebadged phone made by a tier-4 or tier-5 phone-makers for Samsung. Please note 60 million of all 2020 Samsung phones are rebadged.

Small phone with flagship or premium mid range specs already proven to be failure, both Sony & Samsung failed miserably with such phone, phone need to sell in large quantities to be profitable, unless you willing to pay 4000-5000 usd for a niche ...