A game of sequels

Samsung Galaxy Tab 7.0 Plus review: A game of sequels

Unboxing the Galaxy Tab 7.0 Plus

The retail package of the Samsung Galaxy Tab 7.0 Plus brings no surprises. The box holds the device itself, along with a USB cable, a two-piece charger and a set of earphones.

Taking a peek inside the box

The Samsung Galaxy Tab 7.0 Plus gets rid of the angular sides of its predecessor to get more than 2mm slimmer. Overall, it trades the solid, blocky feel of a BlackBerry Playbook with the pretty much uniform design of tapered edges closing around the front, as seen in the Apple iPads and the bigger Samsung tablets.

Unlike its bigger siblings though - the Galaxy Tab 8.9 and the Galaxy Tab 10.1 - the 7.0 Plus is designed with portrait use in mind. The earpiece is on top where it belongs, while the charging port is on a short side, right under the Samsung logo. Of course, four-way screen rotation lets you use the tablet however you like, but portrait seems to be the default orientation.

By comparison, the bigger Samsung tablets don't have a logo anywhere on the front. Another thing is the front camera - in the 7.0 plus it's in the top right corner, rather than being centrally placed on one of the long sides. Being in the corner, it can be used in both orientations – portrait and landscape.

In portrait position, the 3.5mm audio jack is on top just like in phones but this makes little sense in a tablet. You're not gonna put it in a pocket and listen to music.

Then we get to the earpiece of course. Full support for telephony is nothing new on Samsung tablets but the 7.0 Plus can actually be used as a phone - and we don't mean speakerphone or headset use. You can hold it to your face and talk as if it were just another handset. Just make sure there's no one around to make laugh of you.

All screen up front, the back of the Tab 7.0 Plus is made entirely of glossy plastic, but the white paintjob does well to hide smudges. Black screen bezel, white back and a silver frame running along the sides - the styling of the Galaxy Tab 7.0 Plus is clean and simple. Tablets usually play it safe and don't get too carried away with the design. The Tab 7.0 Plus is good-looking but portability and comfortable hold are obviously its top priorities.

The Samsung Galaxy Tab 7.0 Plus is built around a 7.0” PLS LCD screen with a resolution of 1024 x 600 pixels. Although obviously not the best screen to find on a Samsung slate, you can expect reasonably good image quality. The 7.0 Plus cannot match the WXGA resolution of its bigger siblings or the Super AMOLED screen of the Galaxy Tab 7.7 but the main competition isn’t doing a lot better either. The Blackberry Playbook and the HTC Flyer offer the same size and display resolution.

The 7.0 Plus has a rather bright display with colors and contrast looking good indoors. There's a dedicated picture mode setting that lets you boost or tone down the saturation and contrast. As far as the outdoor visibility is concerned, it's passable even if colors do get a bit washed out. There is no chance you lose sight of what's happening on the screen, so no worries there.


The Samsung Galaxy Tab 7.0 Plus has no hardware controls at the front – it doesn't need any with Honeycomb inside. That makes it easily distinct from the original, which has four capacitive controls below the screen. Here, all you get is the front camera and an earpiece.

At the top we find the 3.5mm audio jack and the secondary microphone used for stereo audio in camcorder mode. The other one is at the bottom and you are warned upon launch of the camcorder app against covering the microphones.

Moving on to the bottom, the Samsung Galaxy Tab 7.0 Plus looks much like an iPad. It uses a proprietary 30-pin connector for charging and connectivity. The two speakers are on either side of that port. Not quite the stereo speaker layout if you ask us - and no, the earpiece doesn't get involved in video playback.

The bottom has the speakers, the primary mic and the connectivity port

Both the USB host and HDMI TV-out require adapters to work and they are not part of the standard package. An SD card reader is another optional accessory, which you can purchase separately. Be warned that you'll need a power cable to use the HDMI TV-out.

Aesthetically, a single connectivity port is the preferred solution, but still we prefer the separate USB and HDMI ports because they use standard cables, which are easier to come across.

The long sides of the slate accommodate lots of stuff. On the left you can find the SIM compartment and microSD slot, both sealed with plastic lids. The right side features the Power/Lock button, the thin volume rocker and the infrared port. The latter is used by the preloaded Peel Smart Remote app to turn the tablet into a giant universal remote of sorts.

The SIM and microSD slots on the left • The volume rocker, power/lock key and the infrared port on the right

The journey ends at the white back of the Samsung Galaxy Tab 7.0 Plus - we should note there's a model finished in black too. Anyway, the 3.15 megapixel camera comes with an LED flash, which will probably make better use as a torch than provide serious shooting assistance. Then again, nobody buys a tablet for its imaging capabilities.

The all-white back of the Galaxy Tab 7.0 Plus

The Samsung Galaxy Tab 7.0 Plus is powered by a 4000 mAh Li-Ion battery. Along with the screen resolution, it's one of the things that remained unchanged since the original.

The battery of the Galaxy Tab 7.0 Plus achieved a score of the average rate of 63 hours in our battery test. This means that if you use your device for an hour each of phone calls, web browsing, and video playback every day, you will have to recharge it every 63 hours. 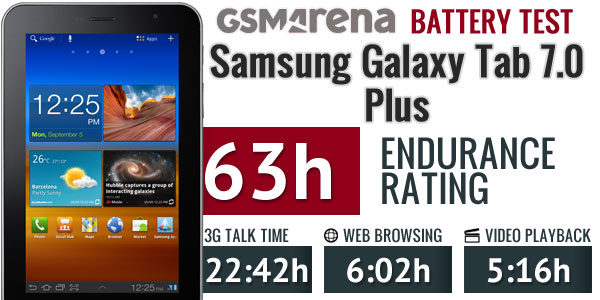 The Samsung Galaxy Tab 7.0 Plus is well built and feels strong but not heavy in hand. It's easy to handle and that's why people would go for a 7" tablet in the first place. The 7.0 Plus is a welcome upgrade over the original Samsung Galaxy Tab. The Honeycomb 3.2 software is a good enough motivation but the bump in processing power is not to be underestimated either. For one, the 7.0 Plus won’t feel out of depth around dual core competitors but Samsung's own Exynos SoC gives its media credentials a serious boost.

The screen resolution is the lowest in the Samsung tablet lineup but on par with the main competitors. The phone capabilities are an obvious advantage.

The Galaxy Tab 7.0 Plus held in hands