A game of sequels

Samsung Galaxy Tab 7.0 Plus review: A game of sequels

The Samsung Galaxy Tab 7.0 Plus is running the latest Android build for tablets, Honeycomb 3.2. It is skinned with Samsung's proprietary TouchWiz UI like all the recent Samsung tablets. The TouchWiz additions are nice, but you shouldn't expect changes to run as deep as on the company's smartphones. These are just some custom touches that should help the Galaxy Tab 7.0 Plus stand out in the Honeycomb crowd.

Before we begin here is a video demo of the user interface in action.

Designed from the ground up for tablet use, the Honeycomb interface gets rid of the typical Android controls we've seen in smartphones. The navigation keys are in the bottom left corner of the homescreen: Back, Home and Task switcher (plus a screenshot key courtesy of TouchWiz). The search shortcut is in the top left, the app drawer in the top right and finally, but certainly not least importantly, the notification area with quick toggles in the lower right corner.

The taskbar at the bottom is no longer static. A tap on the arrow flips it to its side to reveal eight shortcuts. Clicking on any of them opens a widget that you are free to move around the screen and it stays on top of everything until you close it or you open its full-screen app.

All the taskbar-docked shortcuts called mini-apps are proprietary Samsung stuff. They include the in-house task manager, phone and messaging widgets, world clock and the PenMemo app, as well as a calendar, calculator and a music player. Most of the functionality is overlapping anyway so you might not need to go there too often.

The notification area has the connectivity toggles that we’ve come to know from the smartphone edition of TouchWiz. They offer more functionality than the stock Honeycomb quick settings - including GPS, Wi-Fi and Bluetooth controls - which saves you the extra effort of entering the extended settings menu. The rest of the toggles are Notifications, Sound, Auto-rotation and Flight mode.

The icons it the bottom left corner also have a new addition. We don’t know how many people other than reviewers and developers will find the new screenshot button useful, but it doesn’t hurt having it.

The functionality of the other buttons has remained unchanged – back, home and task switcher is what you get with stock Honeycomb.

The search shortcuts (voice and text) are in the top left corner of the homescreen, while the app launcher and homescreen edit buttons stay in the top right. In-betweenis the final change brought by Samsung – the dots indicating the number of available homescreen panes and the current selection (and they are clickable for quick navigation).

The app launcher has seen no modifications at all, but there are plenty of preinstalled apps that cannot be found on other tablets – Social Hub, Music hub, Pulse reader, AllShare, Polaris Office, Video player and My files. Some of the other apps like the music player and the calendar have been modified as well.

We ran the traditional Android benchmarks on the Galaxy Tab 7.0 Plus (Exynos, dual-core Cortex-A9 1.2GHz, Mali-400MP GPU). Obviously, processing power is the last thing to worry about in this tablet. It can easily match, and even beat, most of the current crop of droid flagships (smartphones and tablets). You can rest assured you'll be getting all the performance you need. There are only two gadgets proven to outdo the Tab 7.0 Plus in some tests: Samsung's own Galaxy Nexus (TI OMAP 4460, dual-core Cortex-A9 1.2GHz, PowerVR SGX540 GPU, Android Ice Cream Sandwich) and the Galaxy Note (Exynos, dual-core Cortex-A9 1.4GHz, Mali-400MP GPU, Android Gingerbread). We should probably put the Galaxy Tab 7.7 in there too but not before we've seen and tested a market-ready unit. 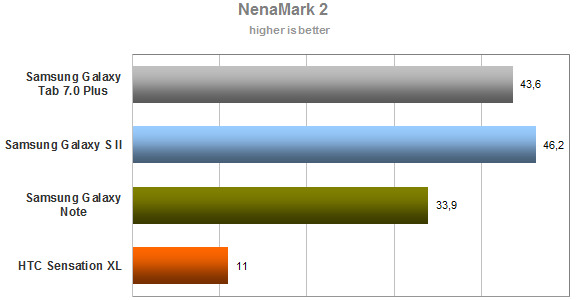 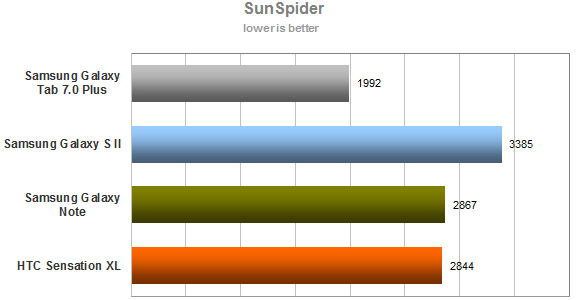