We weren’t expecting any surprising extras in the box and we didn’t find any, nor anything missing for that matter. The Samsung I9103 Galaxy R comes with a compact microUSB charger, a separate microUSB cable and a one-piece headset (in-ear design). There are a few manuals too.

What's in the box of the Samsung I9103 Galaxy R

The Samsung Galaxy I9103 Galaxy R is a budget version of the Galaxy S II flagship. As we already pointed out, the Galaxy R is a bit thicker and heavier than the S II. On the upside, the back features a brushed metal plate (a la Omnia W), which improves the looks of the otherwise all-plastic design.

As for the thickness, the Galaxy R is still under the 10mm barrier and it's thinner than the original Galaxy S. It's not a thick phone, it just can't brag about how thin it is (to be fair, the S II can't anymore either, since the new Motorola RAZR came out).

It is pretty bright, though the black levels are a letdown. Still, the screen behaves very well when viewed at an angle - there's some contrast loss, but colors remain unchanged. Speaking of colors, the SC-LCD screen doesn’t offer colors that "pop" like AMOLED screens do, but they still look pretty good.

We measured the brightness and the contrast of the screen, here's how it compares to the Galaxy W and some of the other phones we've tested. It proved really bright, though the contrast was average.

Anyway, above the screen we have (from left to right) the 1.3MP video call camera, ambient light sensor, proximity sensor and earpiece.

The SC-LCD unit is good • the sensor array, secondary camera and earpiece

Below the display there are three keys only – the touch-sensitive menu and back buttons are on either side of a hardware home key. A long press on the menu key launches the search, so in effect users still have a dedicated search key. As usual, pressing and holding the home key activates the task switcher.

The three Android keys below the display

The only thing of interest on the left side of the Samsung I9103 Galaxy R is the comfortable volume rocker.

The power/lock key is placed high up on the opposite side of the handset. This is the traditional position for that key on Samsung phones and has another advantage - it's easy to reach when holding the phone one-handed with either hand.

On the top side of the phone is the 3.5mm audio jack, the secondary microphone and a small notch to help you open the back cover.

At the bottom, there’s the primary microphone and the microUSB port, which doubles as a charging port. Both the audio jack and microUSB port are left open to the elements.

The 3.5mm jack is on top • the microUSB port is at the bottom

The back cover is one big plastic piece with a metallic inlay with brushed metal finish. We tugged at the metal inlay for a while until we realized that it’s only a part of the back cover and not the whole back cover. The small notch we mention helps get the cover off.

Above and below the inlay, we find the 5MP camera with LED flash and the loudspeaker grill respectively. The camera is out in the open, with no guards against scratches.

The 5 megapixel camera lens is prone to scratches

The 1650mAh battery can store a lot of juice

Our own test showed that the Galaxy R actually lasts longer than 9 hour in 3G calling. The web browsing result was better than what the S II showed with a respectable 5 hours and 7 minutes. In terms of video playback, the Galaxy R showed an above average result but this was the only test that it lost to the Galaxy S II.

On average, you would need to recharge the Samsung Galaxy R every day and a half if you do an hour each of talking, browsing and watching videos. You can read our blog post on the battery test for more details. 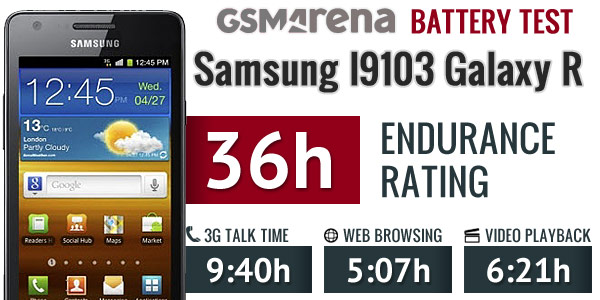 While the Samsung Galaxy R is slightly thicker and heavier than the S II (as we've pointed out several times already), the differences are pretty minor and the phone is just as pocketable as the S II.

The added heft does affect how it feels in the hand though - 20g extra and a metal plate on the back are enough to give you the feeling that there's a fair amount of metal used in building the Galaxy R. There isn't really (the innards are plastic), but it's a nice feeling anyway.

The build quality feels solid and there aren’t any obvious weak points, besides the camera lens that is unprotected.

Samsung I9103 Galaxy R in the hand

Well, on the outside the Samsung Galaxy R might look a lot like the S II, but wait till you see the software. The TouchWizzed Android offers an almost identical experience but pay closer attention to the benchmarks and camera - that's where we expect the bigger differences.