Samsung looks to be keen to point out its commitment to the Windows 8 platform with its freshly-announced Ativ Tab. And by the looks of it this isn't just PR talk. What's more, based on our first impressions of the slate, the company might become a major player in the Windows tablet game. 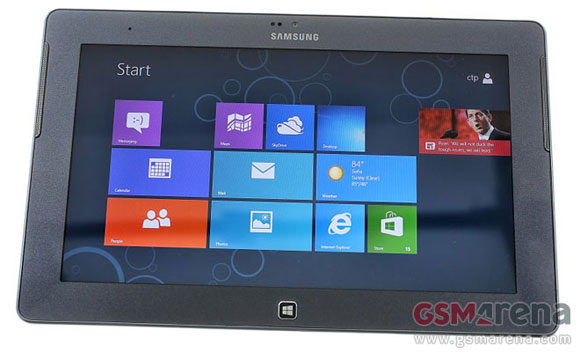 The Samsung Ativ Tabs weighs just 570 grams, which is a decent achievement for tablet of this size. Thanks to that and its 8.9mm slim waistline, the Ativ Tab handles quite nicely as far as 10" slates go.

The Samsung ATIV Tab front, back and sides

In terms of connectivity, the Samsung Ativ Tab offers NFC, Wi-Fi a/b/g/n, Bluetooth 4.0, microHDMI and a full USB 2.0 port, as well as a microSD card slot. On the back, there's a 5MP camera with LED flash, while a 1.9MP snapper at the front takes care of video-chatting.

Overall, the Ativ Tab looks very slick with a plastic back that resembles the hyperglaze material of the Galaxy S III. We like what Samsung has done this time better though, and the good impressions continue when you move to the front which contains only one button - the Windows key. Just like the Galaxy Note 10.1, the stereo speakers are situated at the front on either side of the display, which we find to be the best solution in terms of user experience.

Windows 8 is expected to be released at the end of October, but our experience with the Consumer Preview running on the Ativ Tab was positive. The new UI is quick and looks sharp, and the navigation is drastically different from previous Windows releases - even Windows Phone, despite the similar styling. You will most likely need some time to learn your way around the OS, but once you do you'll really appreciate what Microsoft has done with the place.