The Samsung Infuse 4G continues with its North American invasion. This time, the 4.5" screen beast is on its way to Canada, after it has gone through a couple of major changes which are bound to make it even more desirable. 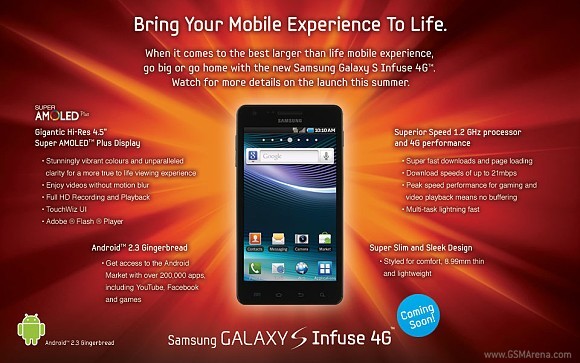 As you can see on the promotional picture from Samsung's Canadian website, the device is announced to ship with Android 2.3 Gingerbread when it becomes available. A full HD camera recording is also listed, most likely as a result of the OS upgrade. This means that the Infuse 4G will be able to fully utilize the camera unit which it shares with the mighty Galaxy S2.

When we did our review of the AT&T branded, large screen handset, our two minor complaints were exactly the old Android version, and the lack of 1080p camera recording. Having fixed these issues, Samsung can rightfully claim (at least until the arrival of Galaxy S2) that the Infuse 4G is its true North American flagship.

There is no word on Gingerbread availability for the AT&T version of Samsung Infuse 4G. As always, we will keep our ears to the ground and keep you posted as soon as we find out.

dear samsung, how about radio function? if you could add this it will be full spec phone and can compete with Galaxy S2

why this phone RAM capability has not been mentioned anywhere in the site?