We are sure many of you are eager to check the performance of both snappers and now we can help you with that.

Here are the official camera samples taken with the rear camera of the Galaxy S6.

And here are some official shots taken with the front 5MP snapper.

We also took some samples inside the venue:

Our camera samples with the 16MP Galaxy S6 rear camera

We also tried out the HDR mode on the Galaxy S6.

Samsung had a dimly lit setup to test the low-light performance of the Galaxy S6's new camera. With a Galaxy Note Edge and a Apple iPhone 6 on hand we snapped a couple of shots.

And you may also want to check out this 1080p video shot with the rear camera of the Galaxy S6.

The Samsung Galaxy S6 camera can do HDR in video too, here's a quick demo of what an effect it has.

The Samsung Galaxy S6 has optical image stabilization and Samsung was so proud of it that it created a mechanical setup where you can pit any handset against the new flagship. 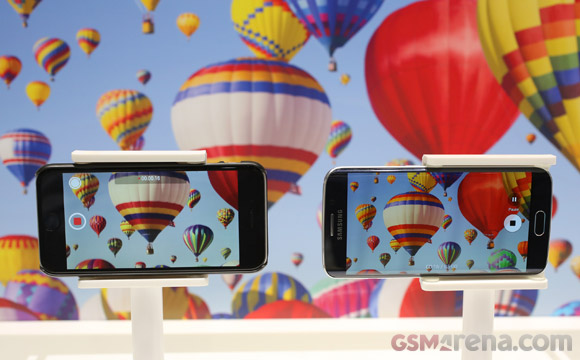 We had an iPhone 6 in our pocket (sadly, no iPhone 6 Plus) so we went for it. The iPhone 6 has one of the best software image stabilization around.

We're also quite fond of Instagram's Hyperlapse so we gave it a shot too:

The camera indeed looks quite promising. We'll be passing judgments once we got our hands on a retail unit, but we are settings out hopes high for sure.