A new Galaxy model - SM-W2016 - was spotted within the GFX database. It is powered by the high-end Exynos 7 Octa chipset with an octa-core processor, Mali-T760MP8 GPU and 3GB of RAM. The internal storage of the W2016 is 64GB and its camera duo is identical with the Galaxy S6 lineup - a 16MP 16:9 main camera and a 5MP front snapper. 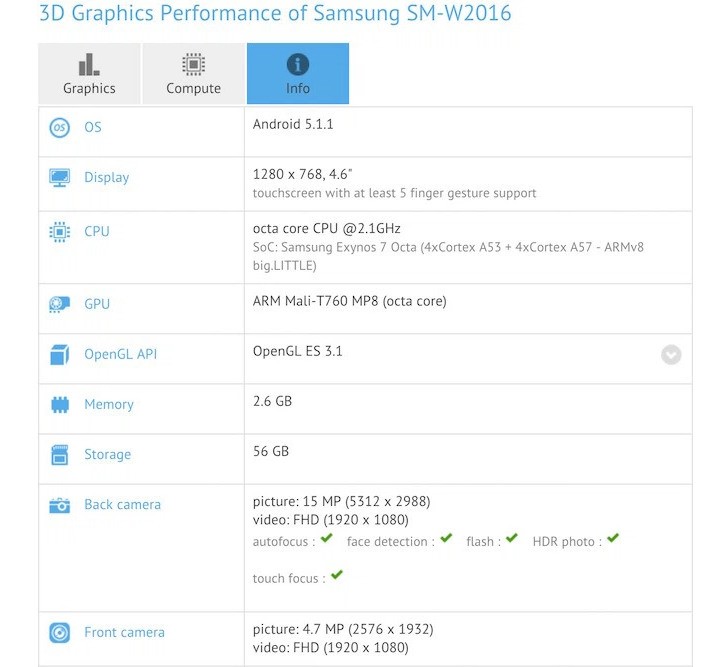 Note that the benchmark suggests the screen is a 4.6" HD one, but we've seen benchmarks get this wrong quite a few times in the past. The most fresh example is indeed the G9198 model, which leaked in GFXBench with the same 4.6" HD display, but turned out differently.

The new model was also spotted recently inside the Zauba listings - it was imported in India for testing on October 6. The listed price is INR 26,725, which translates in roughly €360 before taxes (or about €420 if it were to sell in Europe).

Since the W2016 Galaxy was imported in India, there is a good chance it isn't another phone meant for Korea.

Apparently Samsung created another niche device, but this time around it features flagship specs. The two displays are most probably of the Super AMOLED kind.

We are waitting for the uk version

looks good hope it functions as well.has it come to kuwait.wil buy one.